As More Come Home, Orange Lake Veterans Welcome Those From All Wars 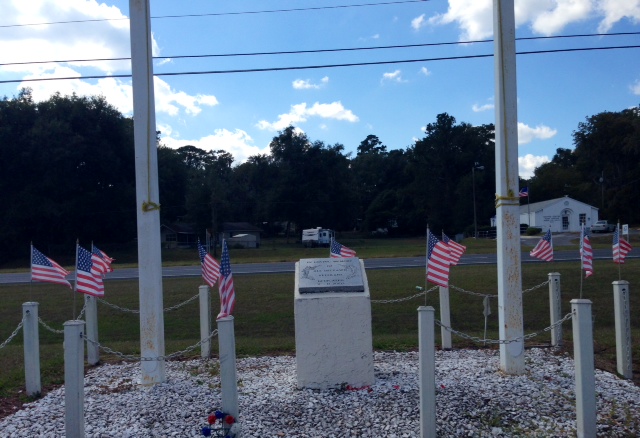 A ceremony will be held on Veterans Day outside the Orange Lake VFW post.

Frank Brown still recalls what it was like trying to enroll in college after returning home from Vietnam.

“He says ‘Why should we let you in?’ and I said, ‘Well I was an officer in Vietnam,’ and he says, ‘I don’t know if that helps you or hinders you,'” Brown said.

Brown is one in a group of Marion County veterans who frequents the Veterans of Foreign Wars post in Orange Lake.

The VFW’s parking lot is filled with cars sporting stickers that read “Support Our Troops” and “POW/MIA.”

A veteran sits on a bench outside, playing songs on an old guitar. In the grass, 10 white posts topped with small American flags blow in the wind, forming a rectangle around a stone monument. The engraved plaque reads, “In Loving Memory of all Deceased Veterans.”

On Nov. 11, veterans, friends and family will gather for a ceremony there to honor all those who have served their country.

Inside the VFW, veterans have a few beers and talk.

People are encouraged by their friends to tell stories about their past service as they play cards and slot machines. They try to figure out who the oldest veteran really is.

Brown, an army captain during the Vietnam War, said veterans were not honored when they returned home, even some of their own comrades.

“The general attitude of the VFW from the WWII and the Korean vets is that Vietnam was not a war, so we kind of got it double hit,” he said. “It took a while before we were accepted, even amongst the military.”

Brown said he is thankful for the way Americans treated vets coming home from Iraq and Afghanistan.

“You feel really glad they are getting recognition, but at the same time, you’re looking at it thinking, ‘This is going overboard; not everyone is a hero,'” he said. “People say, ‘Thank you for your service,’ and I say, ‘Well, if that makes you feel better – but you don’t have to thank me for my service; it was an honor to do it.'”

Vietnam War veteran Hawk Shaw said he feels Vietnam veterans are the ones really pushing for veteran opportunities and rights.

Shaw had a difficult time even enlisting in the army. At 4 feet 11 inches, the Marines were unwilling to let him into the military.

“I was a golden glove boxer and another buddy – he was a gymnast,” he said, “so we kind of thought we were little toughies, you know?”

Shaw recalled the details from the time he enlisted.

“I weighed 108 pounds and I think he weighed less than I did, and we went to the recruiters office and they laughed us out of their office,” he said. “So we went back in and we challenged these big marines, and they laughed again. They said, ‘So you think you are going to be able to make a marine?’ and they signed us up.”

Eventually, Shaw went on to serve not only in the Marines during Vietnam, but the Army and Coast Guard. He said he has many plans for Veteran’s Day.

“This year we’re going to hand out poppies in three locations, which are to be worn in memory of our troops,” he said. “We will do a ceremony at the VFW, our flags low. After that we’re going to go visit a few older folks so they’re not completely left out of the ballgame, just because they’re living in assisted living facilities.”

In January, the Orange Lake VFW will add to its original memorial.

Roger Spradlin was the only man from the area to be killed during the Vietnam War. The ceremony will honor Spradlin and his family members who still reside in the area.

Amanda is a reporter for WUFT News. Reach him by calling 352-392-6397 or emailing news@wuft.org.
Previous Alachua County Recognizes Local Medal of Honor Recipient Among Korean Vets
Next Farmers Get ‘Smarter’ with New UF Apps