H.J. Herrera and other artists flock to Gainesville for festival

The sight of one-of-a-kind pieces, the smell of kettle corn wafting through the air and the sounds of laughter and conversation coming from the young and old this weekend at the 31st annual Gainesville Downtown Festival & Art Show.

More than 250 jewelers, photographers artists showcased their work at this event hosted by the City of Gainesville Department of Parks, Recreation and Cultural Affairs.

For H.J. Herrera, who has participated in the show for nearly 20 years, this year was special. Herrera was chosen as the poster artist for the 2012 festival.

“For as long as I can remember, I have been a visual type person,” Herrera said. “I’ve had an interest in photography since high school.”

Herrera said he submitted some of his photographs to Linda Piper, the festival’s events coordinator, and he was later notified his photo of Lake Alice, located on the University of Florida campus, had been chosen. T-shirts and posters with the image were available for purchase at the event.

“I love nature, from the minutiae to the majestic and everything in between,” Herrera said. “I also love to photograph colors and textures and architectural details. It really depends on the environment in which I am in with the camera.”

Families, children and students browsed the various booths, which sold wares from colorful scarves to intricate stoneware and landscape photography. Items were available in all price ranges, from less than $10 to several hundred dollars.

Adriana Espinal, a fourth-year environmental engineering student at UF, said she heard about the event from a huge banner on University Avenue. Espinal said she also attended the event last year.

“I love seeing all the amazing things the artists produce, especially the local artists,” Espinal said.

The event is usually busy both days, according to Herrera. As a local photographer who lives in Gainesville with his family, Herrera said he enjoys seeing friends and fellow artists at local shows like this.

Herrera mentioned his favorite photographs have changed over time. One of the most memorable images for him is a photo of the River Styx near Micanopy. Herrera pre-visualized the image and waited for the factors to be just right before snapping the shot, a 12-year process.

He shoots many of his landscape photographs in Florida, but he has also traveled to South Carolina and Mexico.

“The Chair and the Doily” is one of Herrera’s photographs from Mexico. The juxtaposition of a pristine doily on a three-legged chair is noted by Herrera on his image description, something he attaches to his photographs.

“Some are more memorable than others,” Herrera said. “While people might just see an image, I know what it took to obtain that image at that particular moment and have it look as it does.” 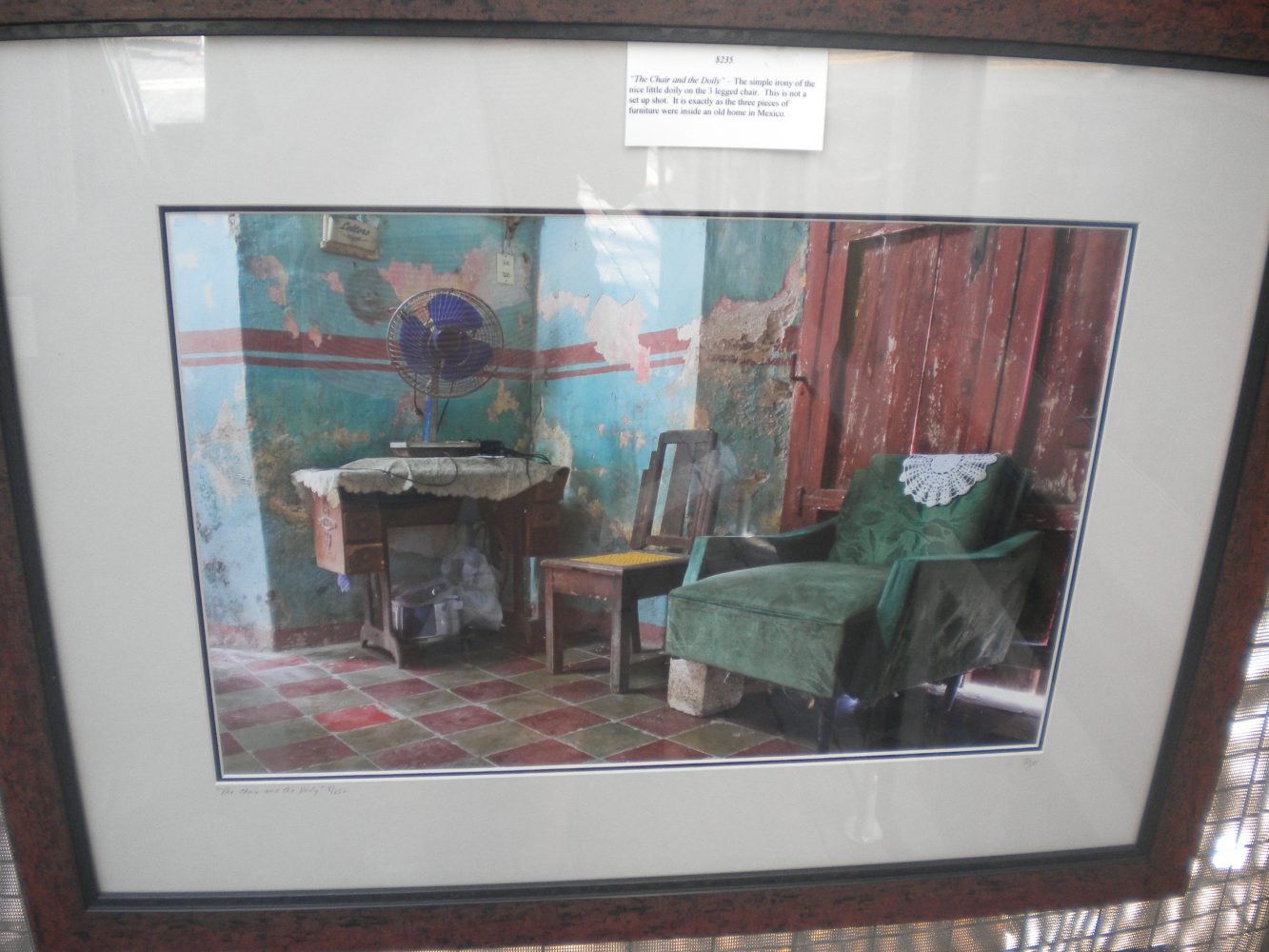 “The Chair and the Doily,” another photograph by H.J. Herrera. 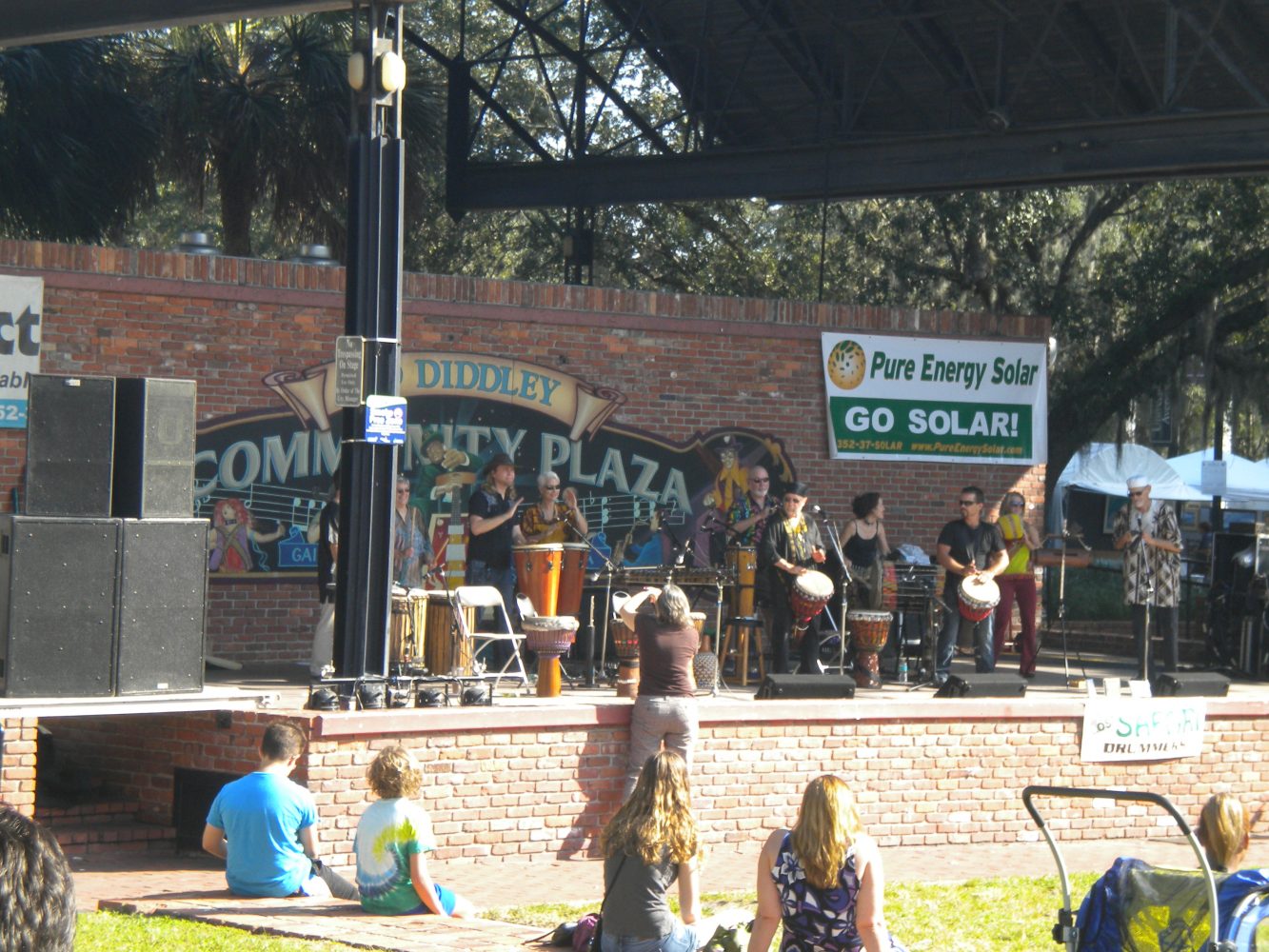 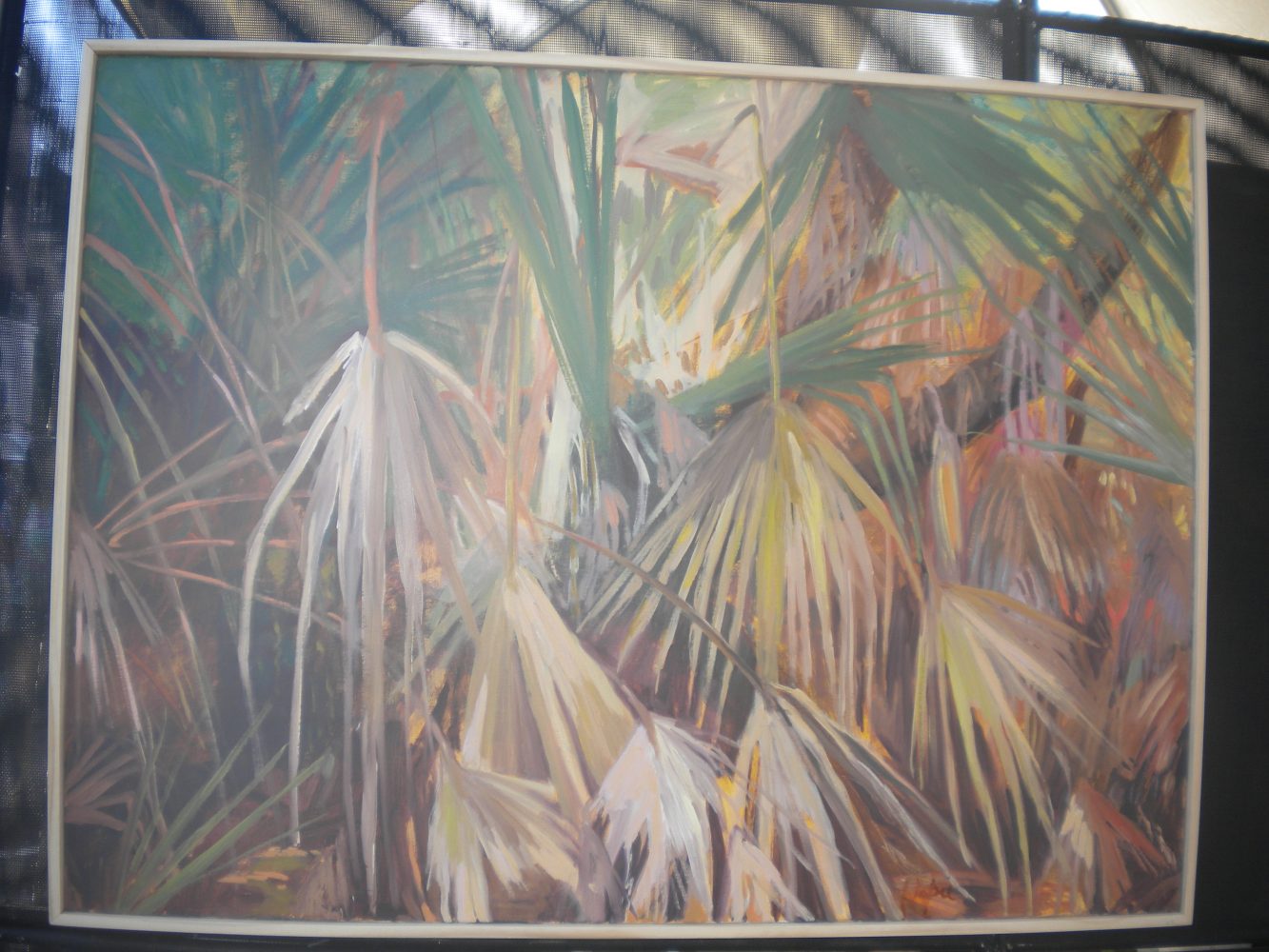 Artwork by Kathleen Wobble, one of the artists featured at the Gainesville Downtown Festival & Art Show. 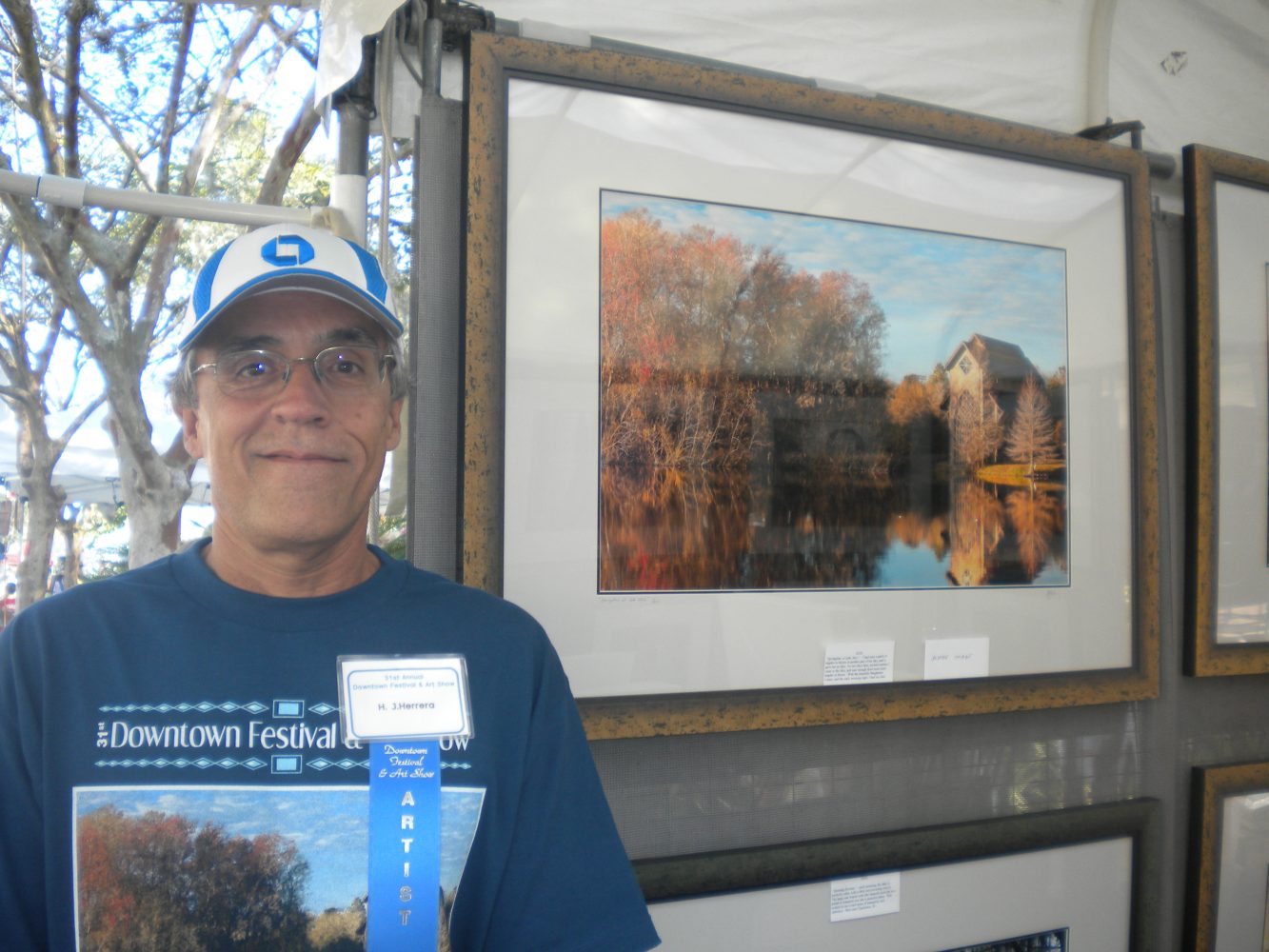 H.J. Herrera in front of the poster image for the 2012 Gainesville Festival & Art Show. 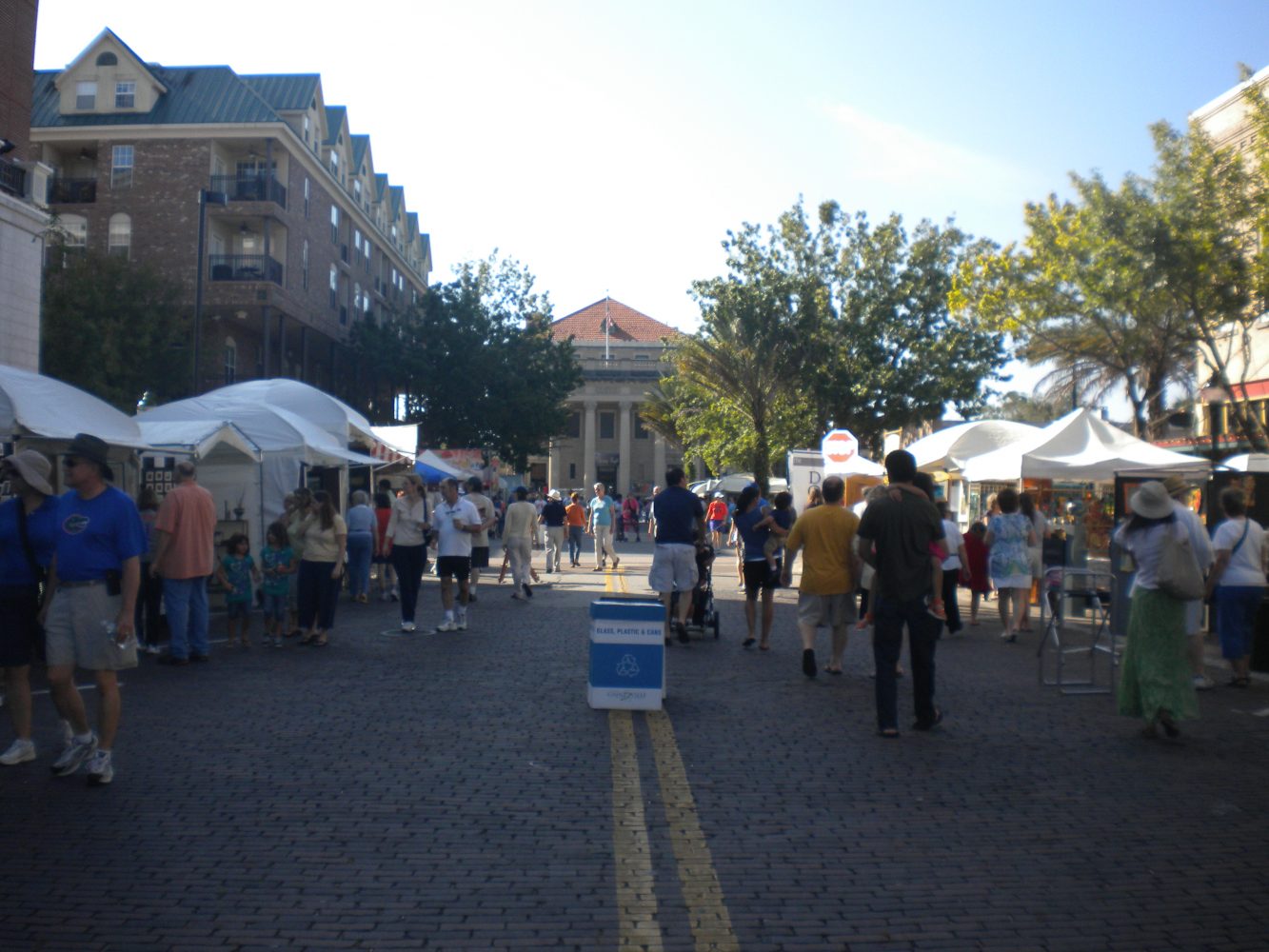 Cassandra is a reporter for WUFT News and can be contacted by calling 352-392-6397 or emailing news@wuft.org.
Previous Possible remains of Christian Aguilar found
Next Man who fled trooper found hiding