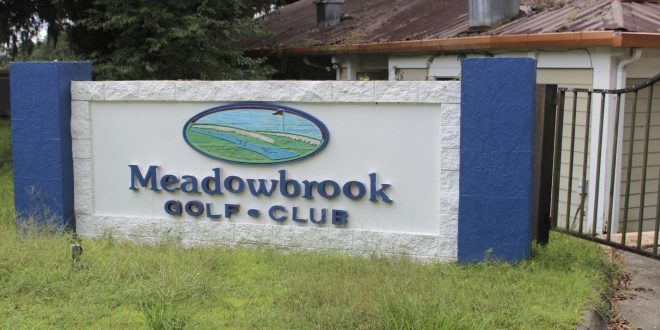 Living on the ninth hole, Steve Smittle had the perfect view of Meadowbrook Golf Club’s lush greens from his porch. He watched golfers go by and enjoyed the quiet, friendly atmosphere. Now, all he sees is wilderness.

Meadowbrook, a private, family-operated golf course located on Northwest 98th Street in Gainesville was announced temporarily closed on July 8. The course closed due to excessive flooding and lack of water drainage from Tropical Storm Elsa. Since then, it has not reopened.

“It’s really unfortunate,” Meadowbrook golfer Steven Madore said. “When I first started playing there the course was not in very good shape. I think when the new owner bought it, he really put in a lot of effort in terms of improving the course.”

Meadowbrook Golf Club and the Meadowbrook community are at a low elevation, where flooding is difficult to avoid. Smittle, who is the president of the Meadowbrook homeowner’s association, said the county has not done a good job to prevent the flooding.

“They keep approving new development in the area that drains directly into our neighborhood and the golf course,” Smittle said. “We [the golf course and the Meadowbrook community], get water in from about five to six different surrounding communities, and we are the low point.”

The course has faced problems in the past with flooding. Scott Johnston, the golf course property manager, spent seven days a week on the greens for five and a half years. He said they knew they would face a major flood every four or five years, but this time was over the top.

“We used to be number 3 on the top flooding list for Gainesville,” Johnston said.

The golf course is a separate entity from the Meadowbrook neighborhood that it surrounds. The homeowners in the community do not pay any dues toward maintenance of the course; however, neighbors are still impacted by the closure.

Smittle said the key thing is that they protect their neighborhood, keep it safe and maintain the quality of their life. When he and his wife Karen first moved to Meadowbrook in 2017, they bought their home because of the quiet, friendly neighborhood.

Smittle said they are working with the owner to try to come up with a plan that allows the owner to operate the golf course in a profitable way while keeping the neighborhood safe.

WUFT reached out to the Meadowbrook Golf Club owner Chris Marcum but did not receive a reply for comment.

The beginning steps of the plan were presented to members of the Meadowbrook HOA committee. According to Smittle, Marcum has had the idea to change the course and develop an entertainment center while keeping the course open in a different configuration.

“His plan requires needing to take at least one or two tennis courts away,” Smittle said. “We are trying to flesh out the details and to let him know our concerns.”

Once complete, the plan will need to be presented to Alachua County for approval of changes. Until then, the course will remain closed.

“This is really a joint effort between the community, the owner and the county to try to work something out,” Johnston said.

Alexus is a reporter for WUFT News who can be reached by calling 352-392-6397 or emailing news@wuft.org.
Previous The Point, Nov. 5, 2021: A Florida congressional candidate never applied to have his civil rights restored
Next University of Florida reverses course, allows professors to testify regardless of compensation

Florida’s climate hit a new record in 2022. According to NOAA, last year marked the …