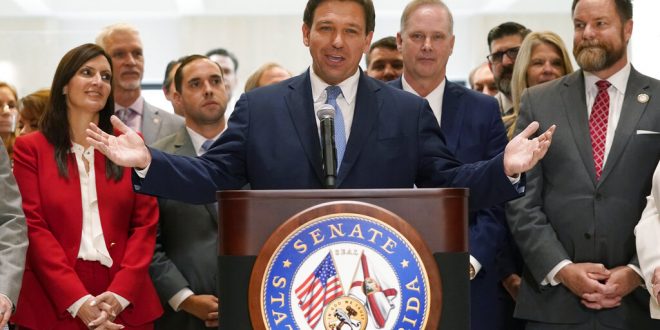 May 3, 2021 Coronavirus, Government and politics

TALLAHASSEE — Florida Gov. Ron DeSantis moved to suspend all remaining COVID-19 restrictions imposed by communities across his state, signing into law on Monday freshly passed legislation giving him sweeping powers to invalidate local emergency measures put in place during the pandemic — including mask mandates, limitations on business operations and the shuttering of schools.

“We don’t know what’s going to happen in the future,” DeSantis said, “but I think this creates a structure that’s going to be a little bit more respectful, I think, of people’s businesses jobs, schools and personal freedom.”

Some mayors, particularly those aligned with the Democratic Party, decried Republican-led preemptions as a power grab against local government’s ability to control a potential resurgence of the coronavirus but also restrict their ability to respond to future public health emergencies.

“It feels like he’s spiking the ball on the 10-yard line,” said Miami Beach Mayor Dan Gelber, whose city is within a county that was among the hardest hit by the coronavirus outbreak. “He’s been following political ideology more than science during this whole pandemic.”

While the law DeSantis signed Monday goes into effect July 1, the Republican governor said he would issue an executive order to more quickly enact some provisions of the new law, including the preemption of existing coronavirus measures enacted by local governments such as mask mandates.

“Today, in preempting both local governments AND businesses from keeping their establishments safe, Ron DeSantis decided he cares not about public health, but power,” tweeted St. Petersburg Mayor Rick Kriseman.

“To be clear, cities like St. Pete, Tampa, Orlando, Miami and Miami Beach, saved Florida and the governor’s behind throughout this pandemic. Can you imagine if each city had been led by Ron DeSantis? How many lives would have been lost? What would our economy look like today?” Kriseman said in another tweet.

The law codifies much of the actions DeSantis had already taken, including pre-empting local governments from enforcing mask mandates, but it also would give the governor — DeSantis and those after him — broad authority during future public health crises to set aside local edicts that do not conform to those issued by the state.

Keeping such measures in place, the Republican governor said during a news conference, undermines confidence in the coronavirus vaccines.

Even as DeSantis advertised the move as a way to protect businesses and workers hurt by pandemic-related shutdowns and business restrictions, the new law would also ban businesses from requiring patrons to show proof of vaccinations in order to get service.

The ban was already in place under an executive order he signed in late March. That order also barred government entities from issuing so-called “vaccine passports.”

The law also directs state health officials to draft a public health emergency management plan to serve as a template for future outbreaks.

The Associated Press is a wire service to which WUFT News subscribes.
Previous Parents Saved One Putnam County School, But Parents At Another Worry About Closure’s Impact On Black Students
Next CDC Survey: Distrust Likely To Keep Majority Of Florida Prisoners From Getting COVID-19 Vaccine