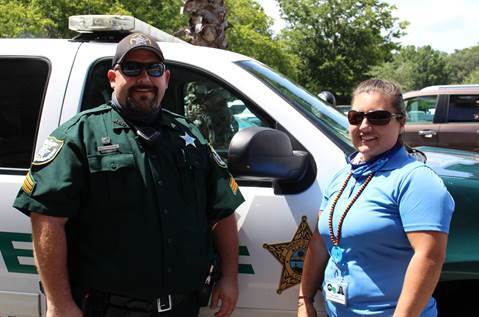 “We’re not just there to be a quick fix Band-Aid,” Maynard said. “We’re there to see if we can provide long-term services, whether they’re needed for the family or the homeless person.”

The long-term services can include eldercare, help with drug addiction and mental health issues.

Below: Kelley and Maynard discuss their work.

The first mental health co-responder team in Gainesville was formed with the police department in 2018.

The co-team is comprised of one law enforcement officer, who ensures the scene is safe, and a mental health clinician, who can intervene immediately with whomever needs attention.

“If someone is waving their arms on University and 13th and he has a gun in his hand, I’m not going to take a counselor to go talk to him right away,” Maynard said.

“I have a ballistics vest, but I’m not equipped to handle the rest of the stuff,” Kelley said. “Once the scene is secure, and the crisis has been calmed a little, then we can have a conversation and work on building rapport. You never want to bring more victims to a scene.”

The county’s crisis center has a system for calls that do not require any law enforcement involvement, Maynard said. If there is ever a question about the safety of the people responding, it is more likely that the co-responder team would be contacted.

When it comes to determining what someone may need, it all comes down to starting a conversation.

“It’s kind of situational, but they might see the sheriff’s uniform or my Meridian uniform, and then they’ll start a conversation,” Kelley said.

Calls are processed and entered, according to policy and procedure, before being forwarded to the appropriate dispatcher.

“Some calls require more than one unit, like a suicidal person with a fire too,” Kelley said. “Having two units tied up means that they can’t respond to any additional calls. That’s where we come in.”

The team self-assigns which call to take, Kelley said. When calls come in, they are color-coded by priority.

“The red calls are priority-one calls, so if there’s any suicide attempts or immediate threat to themselves, then we’ll prioritize that,” Kelley said. “Then priority two would be something like a Baker Act, and priority-three calls would be like domestic disturbances.”

Farther down the priority list are things like well-being checks or medical emergencies where the team would assist the family, Kelley said.

“We’ve helped with a lot of different calls, and citizens may not even know that they’ve gotten a quicker response because we’ve been able to alleviate some of the load,” Kelley said.

Joy Riddle, the senior vice president of Meridian Behavioral Healthcare Inc., said forming these co-responder teams has been a part of their long-term plan for a while.

“Having a clinician there helps in erasing or combating the stigma or criminalization of mental health,” Kinsey said.

Emma is a reporter for WUFT News who can be reached by calling 352-392-6397 or emailing news@wuft.org.
Previous Citrus County School Board Delays Start Dates, Mandates Masks
Next The Point, July 27, 2020: Coronavirus Situation Worsens In Marion County