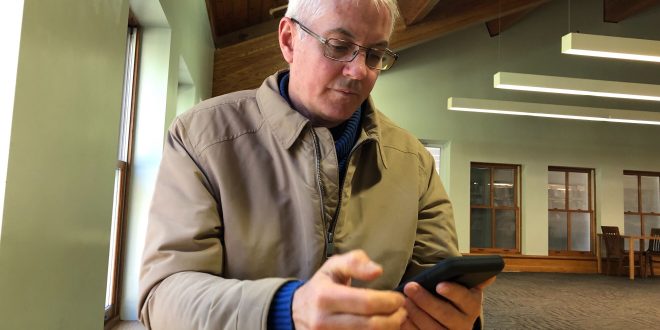 Robert Cecil, 56, who was recorded saying the N-word in a Buchholz High School classroom on Feb. 12, said in an interview Saturday that he had hoped to start a discussion about how no one – black or white – should use the racial slur due to its “hurtful” past as “slave language.” (Ana Escalante/WUFT News)

Editor’s note: Offensive language is contained in the story below.

Robert Cecil says his English class at Buchholz High School in Gainesville began its fateful turn when two students used a racial slur variant in an exchange unrelated to the day’s lesson.

Cecil, who has 16 years’ teaching experience, says he told the class that even using the colloquial version of the N-word – with the soft-a ending – was inappropriate.

Within what he says was a two- to three minute conversation involving hate-inspired language and the First Amendment, however, Cecil, 56, acknowledges that he went too far.

In an exclusive interview with WUFT News on Saturday, Cecil called the situation a “lapse in judgment” that “backfired” – and said he should have not uttered either word in the classroom.

“We could have talked about the difference between the ‘a’ and the ‘er’ at the end instead,” he told a reporter at the downtown branch of the Alachua County Public Library.

Cecil decried that the video was recorded without his permission and shows only 12 seconds of the class discussion. He did not know who recorded the video. Whoever did so, he said, wanted to “twist the story” and “sow seeds of discontent and maybe even bring a white dude down.”

Calling himself a loving husband and father, the teacher added: “I’m getting slandered on the internet, you know, being accused of being racist, but I’m – I’m far from being racist. And that’s unfair. That’s a negative consequence. And, of course, I partly take responsibility for that.”

In the video clip, which went viral across the high school and spawned outrage by community members, students in the class dispute Cecil’s right to use even the slur’s colloquial version. The teacher said, however, only “one or two students” gave him any pushback in the moment. It was not the “eruption” described in news reports, he said.

Cecil said he decided on his own to stay away from Buchholz since the incident, concluding he was “done” there and to “save” his son as well as other teachers and administrators at the school.

“They know me,” Cecil said of his colleagues. “My administration really knows me. I’ve known them for years. And so they can understand this was a teachable moment.”

Buchholz Principal James TenBieg has declined to comment on the matter to WUFT News.

Alachua County Public Schools officials have said they could not discuss the matter publicly until Monday, after Cecil has had the required 10 days to reply to a preliminary investigation.

In a statement to WUFT last week, Cecil apologized for using the N-word in the classroom, writing that he detests it “more than any other word in the English language,” and that “it represents the greatest sin of our country – when we enslaved other human beings.”

He also wrote that he aimed to “demonstrate how it has shock appeal” – and to make “a short parody” of those who believe that “this hate language” is protected by the First Amendment.

In the interview, Cecil recounted the moments before and after what was shown in the video.

When he told the students they shouldn’t use the colloquial version, Cecil said they replied, “‘Oh, Mr. C, you always say that – you know this is the way that we talk.’”

The teacher said he countered: “Let’s agree to both of us can’t say that. But if it’s OK for you, but it’s not OK for me, then something’s wrong with that word.”

He then sought to relate hateful language to freedom of speech. “The video stopped before I said, ‘Because these words are associated with so much bad feelings, emotion, brutality, slavery, we should refrain from using them in my classroom and in polite speech, right?”

Cecil said his generation better understands “more history,” particularly the civil rights movement, and therefore the heavy burden words like the N-word carry. It being commonplace in rap songs and on football fields detracts from the word’s original, hateful meaning, he said.

“This word is full of negative connotations for many, many people, blacks and whites … and I don’t think it has a place in polite society,” Cecil said. He added: “You know, whatever they do among their friends, that’s their business. But once you go to school, it’s a public venue.”

Asked about a headline from Essence magazine maintaining that Cecil “whitesplained” when it was appropriate to use the N-word, Cecil said, “It sounds like it was blacksplained.”

“Let’s find another way to talk to each other, you know, and it’s not just my white opinion. If I can’t say a word because I happen to be white … well, isn’t that reverse racism?”

Cecil said he began teaching at Buchholz in January 2018 after replacing the previous English 1 and 2 teacher. He had previously taught at Myra Terwilliger Elementary in Gainesville.

Destiny Thomas, 18, a Buchholz senior, said Cecil was her English teacher the second half of her sophomore year. Thomas said she was disappointed when she first saw the video.

“He didn’t have to actually spell it out directly,” she said. “I have had teachers in the past who have replaced the N-word with other terms, or simply just said ‘the N-word’ when we’re reading a book in class and it comes up. We all knew what our teacher was trying to say when she used it like that. I don’t understand why he didn’t do the same.”

Cecil said he hopes the video won’t stop him from doing what he loves: Teaching students what’s proper and just in a classroom setting. He expects, though, it will be at a different school.

“Oh, I’ll be back to the classroom, you know, with different electronic rules,” he said, alluding to the use of telephones and video recording. “And also, I have lessons learned from my side.”

Ana is a reporter for WUFT News who can be reached by calling 352-392-6397 or emailing news@wuft.org.
Previous Dark Money Nonprofit Wants Florida Voters To Vote Twice On Future Amendments
Next The Point, Feb. 24, 2020: Florida Legislature Works To Ban Shark Fin Sales