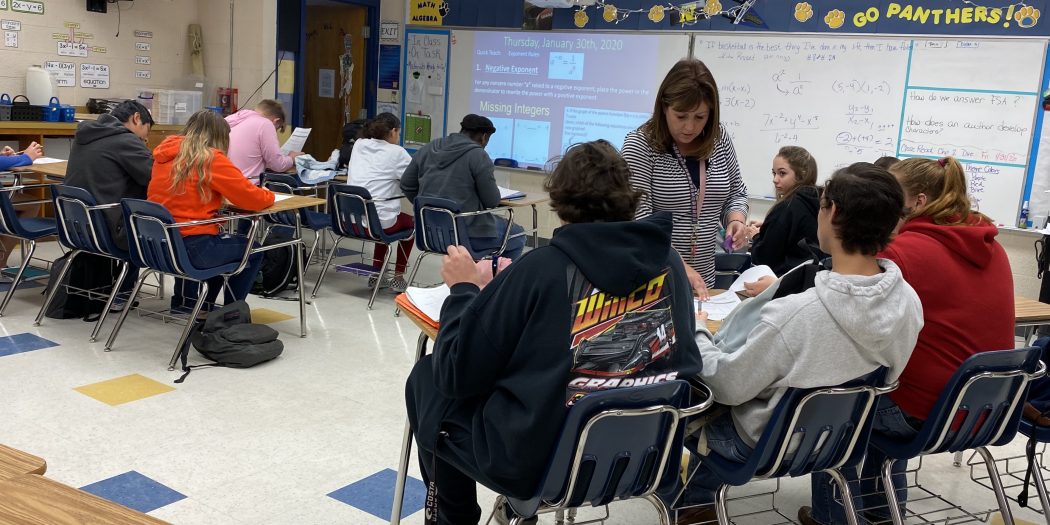 Kyra Purvis, a Newberry High math teacher, goes by every desk to grade students’ assignments. She greets them all by first name and speaks with them one-on-one while checking their homework. (April Rubin/WUFT News)

Morgan Markle entered Newberry High School a shy freshman. She graduated as valedictorian and president of a senior class that itself achieved a status unprecedented in Alachua County.

Newberry’s 2019 class of 154 had a 100% graduation rate – the first for one of the county’s seven public high schools and higher than the statewide rate of 87%.

Now a first-year biology major at Florida State University, Markle, 19, said most of her senior class had been together since elementary school.

“It wasn’t really surprising to me because I feel like my class was really special,” she said.

“I have been with the district for about 20 years and, as far as I’m aware, it’s the first time a traditional public school has earned a 100% graduation rate,” she said.

No one could pinpoint an exact formula for how Newberry High set the record, but all involved attributed the feat to a sense of community and a legacy of hard work.

Principal James Sheppard and Assistant Principal Kris Bracewell each cited multiple reasons for the graduation success. Teachers stay late and come in on weekends, and the community readily donates whatever and whenever is necessary, Sheppard said.

“It takes a conglomerate of people in order to make that happen,” said Sheppard, who is in his second year as principal after being the high school’s assistant principal for two years.

Bracewell said students of different socioeconomic backgrounds encourage each other as well.

“Those who may need a little bit of extra motivation and support, they come alongside them to help them out,” he said.

The Florida Department of Education’s 2018-19 graduation rate report accounts for students who receive their diploma within four years of entering ninth grade. Those who attend a different school from the one they started are calculated as part of their current school’s rate. Students who die or transfer schools are not included in the calculation.

Last year, when Newberry senior Akeem Nelson stopped going to school, Sheppard knocked on his front door to see why. The boy’s father was in jail, which means he didn’t have a way to get to school, so the principal and Bracewell took turns driving him.

“We knew he was a bright student and should graduate – but couldn’t find him,” Sheppard said.

Nelson, a 19-year-old moving company employee who plans to join the U.S. Army, said Sheppard’s energy was always high and positive, and it was obvious the principal cared about every student.

“He was the very first person who didn’t judge me on how I look or how I carried myself,” Nelson said. “He actually judged me on how I acted.”

Newberry High’s move toward greater academic success began in 2005 with tutoring programs to increase reading and math proficiency, said Catherine G. Atria, a professor of educational practice at the University of Florida College of Education.

“One of the nice things about Newberry High School is that it’s a smaller school, so the attention that students receive is pretty significant,” said Atria, who was its assistant principal from 2006-12. “As a student, you are not an unknown.”

Newberry Mayor Jordan Marlowe graduated from the high school in 1994 and now teaches English and history there. The school’s attendance is projected to grow within the next several years, and Marlowe expects it will attract more talented students and teachers alike.

“I liken it to a good football program,” he said. “People come in and they buy into your system. They want to be a part of it.”

Sheppard said Newberry’s three public schools are the city’s “beating heart,” and new residents can be confident that their children won’t fall through the cracks.

Rocky McKinley, lead pastor at Destiny Community Church in Newberry, has been involved with the high school as a community member, basketball coach and parent. He said what sets it apart is its focus on students as individuals rather than as statistics.

“Some administrations get so caught up in the grading system of the school that they forget the minds they’re shaping,” McKinley said.

He added, “That graduation rate is a direct result of the love and care that is shown to them.”

Susan Steele, Newberry High’s media specialist and journalism teacher, has been at the school since 2001. She said it’s hard to pinpoint change over the past two decades, but what has remained consistent is the sense of community and teamwork.

“Sometimes when I picture a large school, it almost seems like a business or corporation, where it’s not necessarily family,” Steele said. “With Newberry High School, every year I’ve been here, there’s been a sense of ‘We’re going to get there,’ and it’ll be together.”

Andrew Hill, now 24, graduated from Newberry in 2014. He said he was welcomed into the school despite attending a different middle school than the one most students there do.

“Teachers really allowed the students to feel like they were safe, and that they could do what they needed to do,” said Hill, who studied geology at Santa Fe College and is the social media director at Jungle Friends Primate Sanctuary.

That’s why the 100% graduation rate didn’t surprise Hill, who remains in contact with some of his former teachers at Newberry.

April is a reporter for WUFT News who can be reached by calling 352-392-6397 or emailing news@wuft.org.
Previous Multiple Alachua County Charter Schools Struggle Financially To Comply With A New Florida Safety Law
Next Alachua County Committee Hosts Discussion About Local Water Concerns