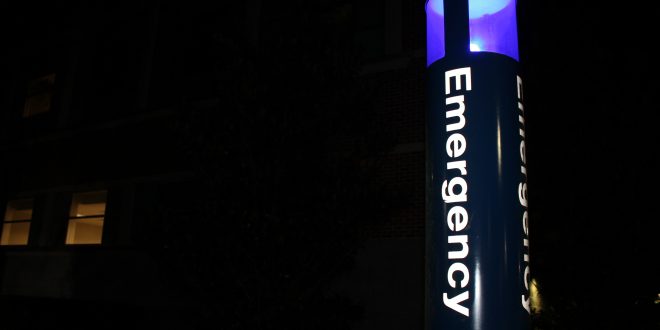 There are over 300 blue lights on UF’s campus. One of these lights active at night is pictured. (Allison Hellier/ WUFT News)

Jennifer Moscovitch approached the microphone at a University of Florida student government meeting shaking but determined.

Moscovitch, 21, a senior dietetics major from Plantation in Broward County, no longer felt frozen, like she was when she said she was sexually assaulted at a fraternity tailgate party before a UF football game in 2016. She was ready to fight back.

“I felt like it had to be done,” Moscovitch said recently of appearing before the UF Student Senate in April. “I was really proud after I spoke. I felt like people finally heard me.”

That pride turned into anguish a week later when a motion to pass a bill calling for the installation of emergency blue lights on fraternity row failed by a 37-36 vote.

There are no emergency blue lights on fraternity row, located on the southwest end of campus near Lake Alice. Advocates for putting lights in the area – which includes dorm complexes, student parking lots and fraternity houses – are planning a protest there at 4:30 p.m. on Tuesday.

The streets around fraternity row are over 4,700 feet in length. The main street, Fraternity Drive, creates a semi-circle, with one end at Woodlawn Drive and two corners meeting at Museum Road. The area also has an adjacent side street: West Fraternity Drive.

According to a 2017 report by the college-focused news site The Tab, 33 percent of sexual assaults on campus occur in this area, home to 16 of the 26 Interfraternity Council houses.

Currently, the closest blue light is 79 feet away from Beta Theta Pi on the north part of fraternity row around 200 feet south of Springs Residential Complex. The farthest blue light is over 1,000 feet from Delta Sigma Phi, in the southwest area around 400 feet from Museum Road.

“This is something that the Gainesville community should support, especially with UF being at the center of Gainesville,” said DeLong, 30, a UF alumna who is pursuing a doctoral degree in interdisciplinary ecology. 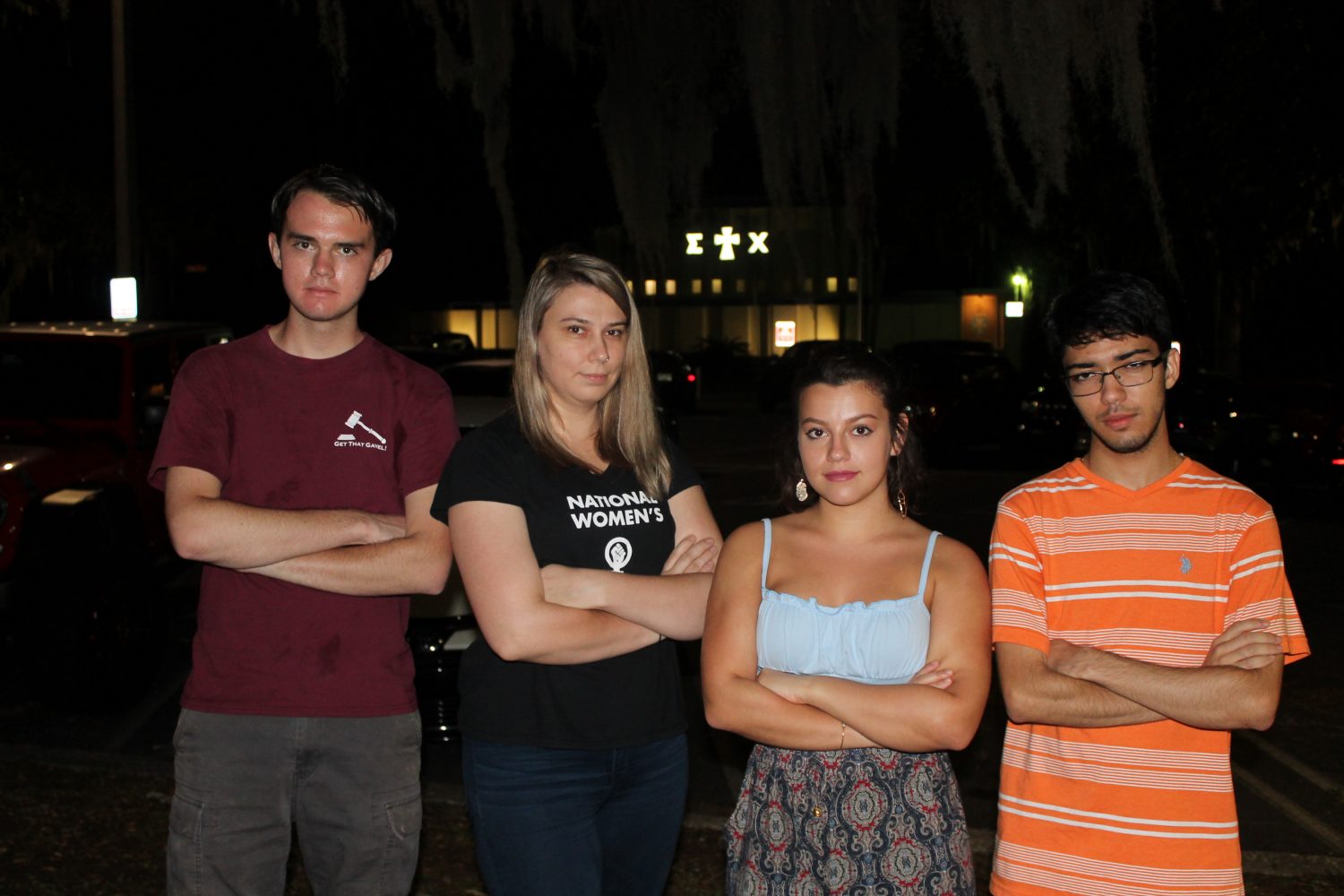 Protest organizers (left to right) Mark Merwitzer, Alia DeLong, Emily Hyden and Alfredo Ortiz stand on fraternity row at UF. The fraternity behind them, Sigma Chi, is one of the proposed blue light areas in a bill pending before the UF Senate. (Allison Hellier/ WUFT News)

UF installed its blue light phone system over 20 years ago as a direct line – 24 hours a day – for students and others on campus to the University of Florida Police Department. There are over 300 such lights on campus, UF Police Maj. Blake Barber said. They have been activated 754 times since 2017, with the majority of calls being tests and accidental, Barber said.

UCF has 245 active blue lights and is installing more, said Amanda Seller, a public information officer there. Four of the lights are on Greek Park Drive, where 11 sorority and fraternity houses are, according to a UCF mobile app. Seller said installation typically costs $12,000 per phone.

USF has 90 blue lights, with four in its sorority and fraternity housing area, Greek Village. USF Police Capt. Meg Ross said there were 75 blue light calls in 2018 and 50 calls in 2019 so far.

FSU Police Lt. John Baker said that campus has over 400 lights, including 14 at Heritage Grove, home to about 35 percent of IFC fraternities. Baker said the lights are critical to campus safety.

Without the blue light phones, he said, “In a situation where a cell phone is not usable or stolen, that ability to contact the police goes away.”

Moscovitch put it another way when saying why UF should have blue light phones on its fraternity row: “I shouldn’t have to carry mace as a precaution.”

Barber said UFPD and UF administration support having more blue lights on campus – and are looking at proposals to install them on fraternity row. He said key factors include the cost and private-property rights of IFC fraternities. The proposed installation, infrastructure and hardware for a light system on fraternity row would cost $93,000, he said.

“We want to emphasize that we listen to our community members when they are bringing forward issues of concern and looking at how we can address them,” Barber said.

UF Student Body President Michael Murphy released a statement Sunday saying that the protest organizers are misinformed and that the blue lights are underused and outdated.

“These students create the impression that there are not additional resources and programs on campus working to keep students safe,” Murphy said.

One of the organizers, Emily Hyden, 20, a junior majoring in international studies, disagreed.

“Every student deserves the same protection wherever they are on campus,” Hyden said. “Every Gator counts – even the ones on Fraternity Drive.”

UF Student Government Senator Zachary Amrose authored the bill that was defeated in April. Saying his goal was to increase campus security, Amrose, 21, a political science major from Jupiter in Palm Beach County, said it was frustrating to have the conversation focused more so on what fraternities want – and not on heeding the wishes of the students across campus.

“There’s nothing more effective than direct action,” he said.

“Our council leadership is not, has not been, and will not be directly involved in any student government decisions or conversations with regards to the use of student government funds toward … installation of these proposed blue lights,” said Enright, 22, a civil engineering major.

UF Senate President Libby Shaw sponsored the bill put forth in April – and then cast the tie-breaking vote leading to its defeat. Shaw declined to comment for this article.

Amrose is a co-sponsor of a pending $25,000 funding request to fund a blue light installation on fraternity row through the student government budget.

The proposed locations would decrease the distance between blue lights and a fraternity house by 36 percent. The bill proposes that the best place to put a blue light on Fraternity Row is near the Sigma Chi fraternity: approximately the median fraternity house and about 600 feet north and south of Fraternity Drive and Museum Road.

Christina Pugliese, 19, a sophomore telecommunications major from West Palm Beach, helped to author the funding request. Pugliese said she has been sexually assaulted three times – including once while at UF – and first spoke publicly about her attacks at the meeting in April.

Pugliese said the blue lights are necessary not just for the physical security of students, but also for the mental security of those recovering with past trauma.

“If you see a beacon of blue light, it’s almost like a pathway to getting your life back on track,” she said. 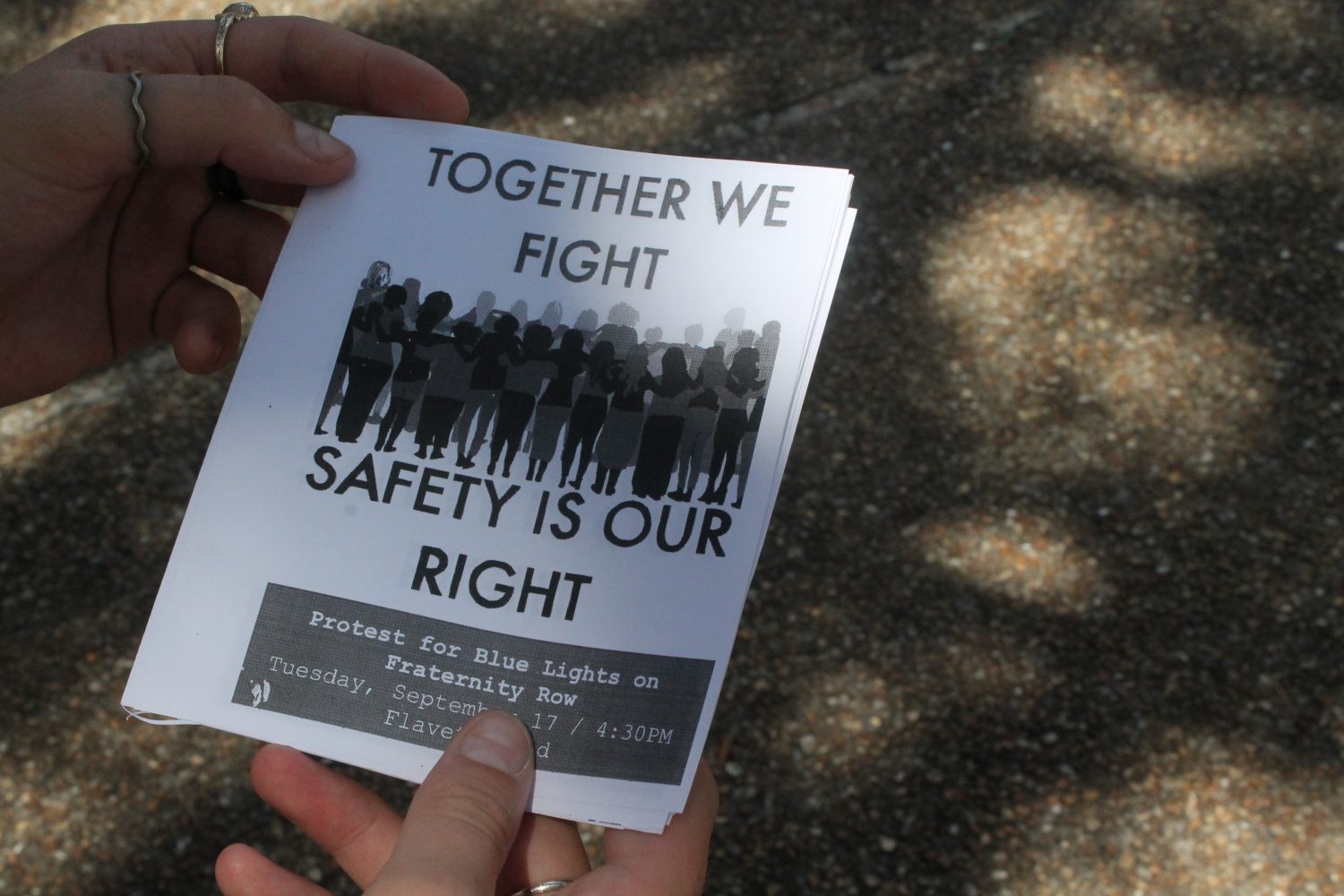 Organizers for the blue lights protest distributed flyers to UF students on Sept. 12 in advance of a protest planned for Tuesday afternoon on fraternity row. (Allison Hellier/ WUFT News)

Allison is a reporter for WUFT News who can be reached by calling 352-392-6397 or emailing news@wuft.org.
Previous Sep. 16, 2019: Afternoon News In 90
Next What Having The Cheesecake Factory In Gainesville Says About The City’s Retail Growth