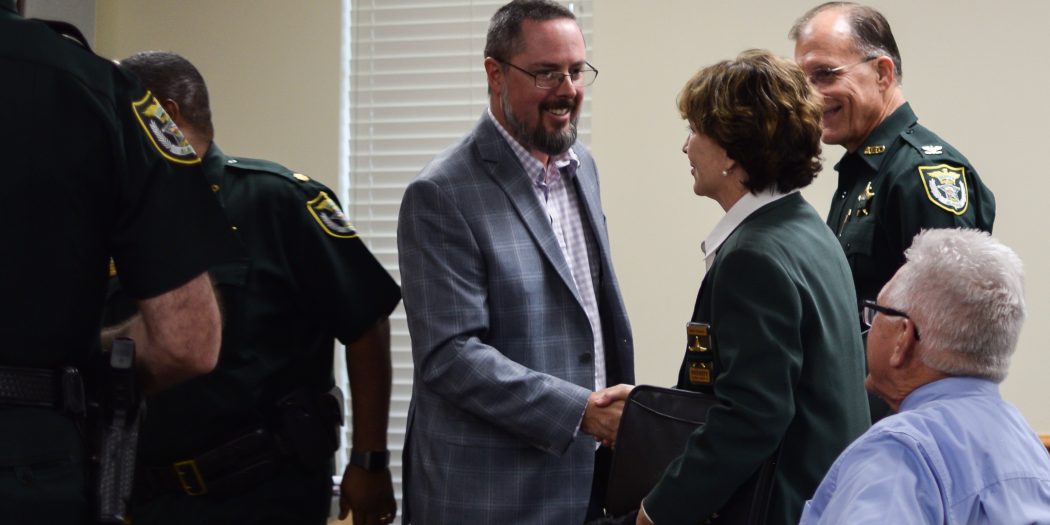 Sheriff Sadie Darnell greets City of Newberry Mayor Jordan Marlowe ahead of the Newberry City Commission meeting Monday night. The city of Newberry will be discussing possible law enforcement options next Monday, including a possible renewal of the current independent contract with the Alachua County Sheriff's Office. (Marcelo Rondon/WUFT News)

Newberry Could Have A New Police Presence In 2020

The Newberry City Commission consolidated its options for a law enforcement contract Monday night, leaving a Newberry police department on the cutting block for the foreseeable future.

Before the end of August, the city of Newberry must decide whether it wants to renew its contract with the Alachua County Sheriff’s Office or purchase law enforcement services from the city of High Springs. Either deal would cost more than $1 million — an increase of more than $150,000 from the present contract with Alachua County Sheriff Sadie Darnell.

Under the current agreement, adopted in 2016, the sheriff’s office provides the following law enforcement services to Newberry: one deputy patrolling within city limits 24/7, three school resource officers, four crossing guards and increased patrol for some city events like the Watermelon Festival.

Renewing the sheriff’s office contract is the cheapest option on the table and would provide similar services to what Newberry currently has in place. Alachua County Sheriff’s deputy Col. Dave Huckstep, who represented Darnell at the law enforcement workshop Monday, said the rise in price would account for employee benefit increases. The deal would last between three and five years.

While the Newberry City Commission and Mayor Jordan Marlowe expressed gratitude and support for the service received under Darnell, one Newberry resident disagreed.

“The sheriff’s office does not do its job,” Debbie Campbell said. She felt that deputies did not write enough speeding tickets.

“Driving around the Canterbury center is like a NASCAR race,” Campbell said.

Huckstep said the concern was valid, and that the sheriff’s office has been trying to get its traffic unit back since cutting it to fund the school resource officer program in the county. He added when people ask for more tickets in a town, they often find it is the residents who speed on their streets.

“You get what you ask for,” Huckstep said.

Newberry City Commissioner Rick Coleman had nothing but praise for the sheriff’s service.

“They are everywhere,” he said.

The other law enforcement option under consideration, a partnership with the city of High Springs, would cost the city around $500,000 more than renewing the contract with Darnell but would provide additional services to those in the current contract. Those services would include an extra 24/7 patrol officer within Newberry city limits, a lieutenant, an evidence technician and a detective whose salary would be split by both municipalities.

According to Newberry City Manager Mike New, only about $1.1 million of the cost would be paid to the city of High Springs. The other $400,000 would be used to purchase weapons, uniforms and a marked police car,

This would allow for Newberry to start building incrementally its own police force.

The price to launch a new police department for Newberry is estimated to cost the city slightly more than the contract proposal from High Springs at $1.6 million per year after an initial $200,000 investment included in the city’s 2020 budget, according to a report New presented at the workshop.

Newberry City Commissioner Tim Marden said the decision should be based on the city’s ability to execute the contract, not the price.

He questioned whether the city could fill all of the required positions after the sheriff’s office’s contract runs out in September 2020.

“It’s not a leap I’m willing to take at this point,” Marden said. “It’s at least a few years out.”

New said creating and operating a new police department would take a “sizable energy investment” and could limit progress in other projects the city is working on.

If Newberry were to enter into an agreement with High Springs, Police Chief Joel DeCoursey and Deputy Chief Antoine Sheppard insisted during the workshop the need for a second officer during night shifts.

“When you have a call in the middle of the night, it’s nice to know that you have someone covering your back,” Sheppard said. “The only way we can guarantee this is by having two officers 24/7.”

Before contracting with Alachua County Sheriff’s Office in 2016, Newberry also considered a proposal from High Springs Police Department. At that time, however, High Springs could only offer three school resource officers due to a Florida law that prevents municipalities from contracting law enforcement from another city unless they share a border.

The only loophole around it was having both cities approve the contract through a voter-approved referendum.

“It was a bigger challenge than anyone could undertake at the time,” said New.

Since then Newberry annexed through a series of ordinances much of adjacent land to High Springs, paving the way for a new policing partnership.

After nearly three hours of discussion, the Newberry city commission narrowed seven proposals to two. Four were from the Alachua County Sheriff’s Office, two were from High Springs and one was the option to create a Newberry Police Department.

Before ending the workshop, Marlowe asked the city to consider stability and pursue a long-term deal with either of the options.

“A five-year contract would stand out,” he said.

Newberry hopes to make a decision by the end of August and have the contract drafted and signed in September. Regardless of which route they take, the city will have one year to prepare before the new contract takes effect Oct. 1, 2020.