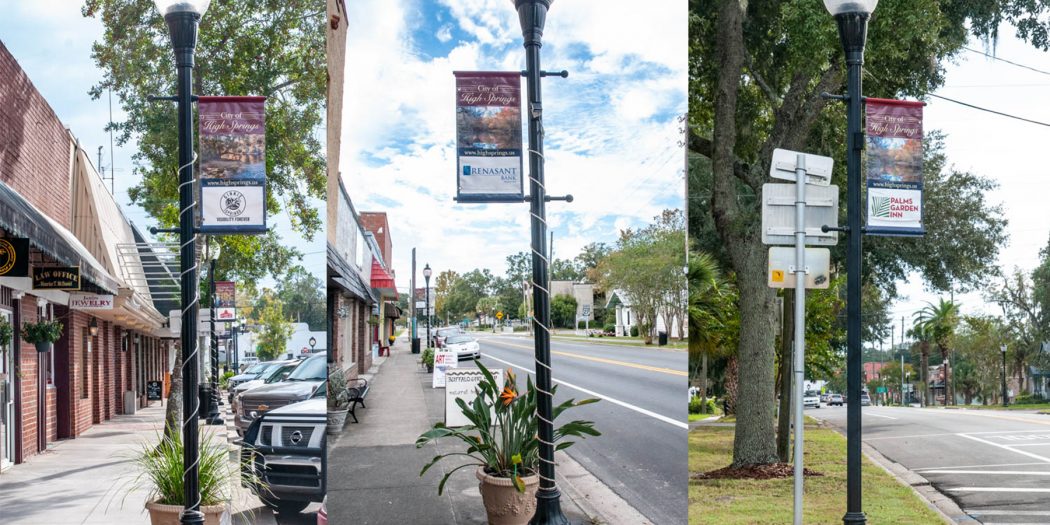 Banners with advertisements line the streets of downtown High Springs. Many business owners have complained to the city about aggressive sales tactics from the salesperson selling the advertising space. (Mark Stine/WUFT News)

Up and down the streets of downtown High Springs, banners hang draped from black light posts. The banners feature “High Springs” in cursive script and show off the city’s picturesque springs, along with advertisements from local businesses.

CGI Communications Inc. and High Springs’ Community Redevelopment Agency (CRA) entered into a three-year contract beginning May 5, 2017, for “community showcase banners” to adorn downtown High Springs. Thirty-one businesses have signed up to have their logo and company name at the bottom of these banners.

Since the agreement began and CGI Project Manager Matt Cottengim started selling advertising space on the banners, city officials, including City Attorney Scott Walker, have received complaints from businesses such as the River Run Olive Oil Company and Lanza Gallery and Art Supplies about aggressive sales tactics over the phone and online.

“My understanding is that there’s repeated phone calls,” Walker said. “When a business wants to terminate the phone call, there’s effort to either call back repeatedly or keep the business person on the line, and it’s aggravating to local businesses.”

Businesses can advertise on CGI’s banners on a yearly basis. Each year, a business has the opportunity to advertise or renew its former advertisement, which costs $795 each. Cottengim said businesses renew with CGI 80% of the time.

CGI is obligated by its contract with the city to sign 25 businesses each year, said Rich Maltby, Walker’s partner at the Folds, Walker & Maltby law firm.

But some business owners say CGI’s sales people often refuse to take “no” for an answer.

Walker and Maltby sent a letter via email and certified mail to CGI Communications on March 28 notifying the company of the numerous complaints the city received. They notified the High Springs City Commission of this letter at the commission’s March 28 meeting.

They have not received a response from CGI Communications, Maltby said. They sent another letter on Wednesday, April 24, as a reminder and demanded a response within a week.

Cottengim said in an email that the company has not received complaints directly from High Springs businesses.

“We have no record of having received any complaints other than the letter received from Mr. Walker,” Cottengim wrote. “We have actively investigated the matter and can find no evidence of such sales tactics other than Mr. Walker’s letter, which does not provide any details.”

One of the complaints came from Mike Casey, owner of River Run Olive Oil at 18627 N. Main St.

Cottengim gave him some names of businesses to whom he said he had sold the banners, Casey said. But when he checked with six of those businesses, he learned that only one had made a deal with Cottengim.

“The pressure was, ‘Hey, I sold them all. If you want one, you’re going to have to get it now,’” Casey said. “And they weren’t all sold.”

Casey said he tried to terminate the deal with Cottengim directly, but the project manager did not answer his phone calls. So River Run Olive Oil Company stopped making payments on the advertisement instead.

In response, Cottengim wrote a negative Google Review about River Run’s “business tactics,” Casey said. The review has since been deleted, and there is no trace of it online.

Corbett refused an offer to advertise with CGI in 2017, and she said she was not pestered to change her mind then. However, when Corbett refused again on a follow-up phone call with Cottengim this year, she said, the situation was different.

“He kept pushing on the phone,” Corbett said, “and I didn’t give him much chance to talk after that. He was very aggressive on the phone, and I had to hang up on him to keep him from talking.”

Both Corbett and Casey said they understand that Cottengim was doing his job to sell the banners.

Betty Gloskowski, owner of Antique Center of High Springs, said she bought a banner advertisement from Cottengim in 2017. Her banner is still on display.

Cottengim called her earlier this year to sell her a renewal, but she declined his offer. Gloskowski said Cottengim kept her on the line after her refusal until she terminated the phone call, which she described as “pushy.”

Walker said he hopes CGI will respond to the second letter and modify its sales approach.

“The concern is that the sales tactics have just been too aggressive for our High Springs community. That’s where the problem lays,” Walker said. “I think the CRA is looking for a successful end to this contract, and hopefully CGI will hold up its end of the bargain and get the banners up and move forward and promote our local businesses.”

Mark is a reporter for WUFT News who can be reached by calling 352-392-6397 or emailing news@wuft.org.
Previous Gainesville’s Mental Health Co-Responder Team Diverts Arrests and Saves Taxpayers Money
Next Ocala Drive-In Theatre Hangs On Amid Decades Of Nationwide Decline For Drive-Ins