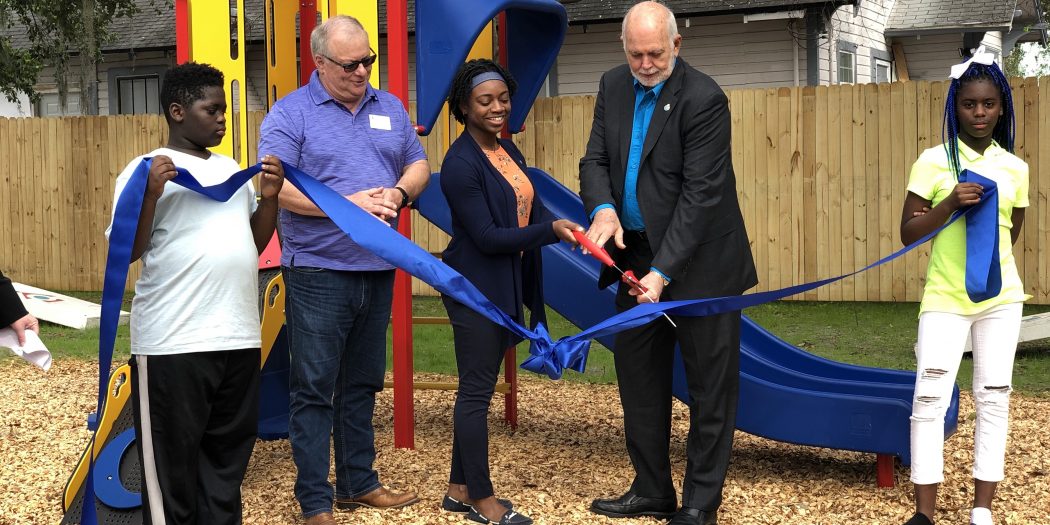 Zakiya Smith-Dore (left), president of the Rotaract Club of Gainesville, and Barry Rassin (right), president of Rotary International, hold the scissors to prepare to cut the ribbon to celebrate the new playground. (Angel Ransby/WUFT News)

Applause filled the air Thursday afternoon as a large ribbon was cut in celebration of the newly developed playground at St. Francis House.

St. Francis House in Gainesville opens its doors to 35 people each night to fill its eight available rooms. The facility runs on a first-come, first-served basis, but priority is given to families with children.

Kent Vann, executive director of St. Francis House, said about 70 percent of those who stay at St. Francis are children.

The families of St. Francis House were very happy to hear about the new development, Vann said.

“Most people’s early memories are from a playground,” he said. “You’re having to be in a shelter where you basically don’t have anything. For a child to come in here to have a warm meal and a safe place and then have a playground to be able to go out to, at least it brings them a little joy in this.”

Ryan Kremser, vice president of the Rotaract Club of Gainesville, said the project took about two years of fundraising, planning and preparation.

Rotaract Club members have volunteered in the St. Francis House kitchen for several years, and some also came to the realization that there was nowhere for the children to play outdoors.

Equipment with rotten wood and rusty nails once sat where the new playground stands, Kremser said.

The Rotaract Club removed the old material three years ago, but plans for a new one hit a snag. Jennifer Van Hart, president of the Gainesville Rotary Club, said Rotaract came up with the idea for the playground but lacked the funding to carry out the plan.

The Rotaract Club raised $1,000 from donations and fundraisers. The Rotary Club of Gainesville Foundation Inc. contributed $5,000.

Just days before the Rotary District 6970’s April 2018 grant application deadline, the Rotaract Club applied to match the $6,000 that had been raised.

“As a general rule, as long as the project is a good, solid project, and it shows that it’s going to make a difference in someone’s life they’ll approve it.” Van Hart said. “And because the St. Francis House has a huge impact on many people’s lives’ in the community, it was definitely a great project.”

In September, the grant was approved. The hard work began.

Zakiya Smith-Dore, president of the Rotaract Club of Gainesville, said the biggest challenge the club faced during fall weekends of labor was weather.

The club will add foliage to improve the playground’s aesthetic value. They expect to finish by the end of March.

“There’s plenty of opportunity to continue expanding on what we have here, but again phase one is complete, and we’re excited about it,” Smith-Dore said.

The playground includes slides, a basketball hoop, benches, a sandbox and equipment for a game of cornhole.

Van Hart said her theme this year as Rotary Club president is “Rotary is family.” Many of the projects the club has planned for the year are focused on children and families.

St. Francis House and the Rotary Club are similar in their efforts to serve the underserved.

Once a family has been admitted into St. Francis House, the case managers work with the families to create an individualized plan to achieve their goals.

These goals can range from finding housing to receiving a college education.

With the help of St. Francis House, nine women have been able to enroll in college and others have earned their GED, Vann said.

“The biggest thing that St. Francis House does, our priority is families with children, but it’s not to sustain this way of life, it’s to improve their way of life.” Vann said. “We truly transition people away from homelessness.”

Angel is a reporter for WUFT News who can be reached by emailing news@wuft.org or calling 352-392-6397.
Previous Surviving Parkland
Next The Point, Feb. 15, 2019: ‘We’ve All Been Changed Forever’: Three Reflections From Parkland