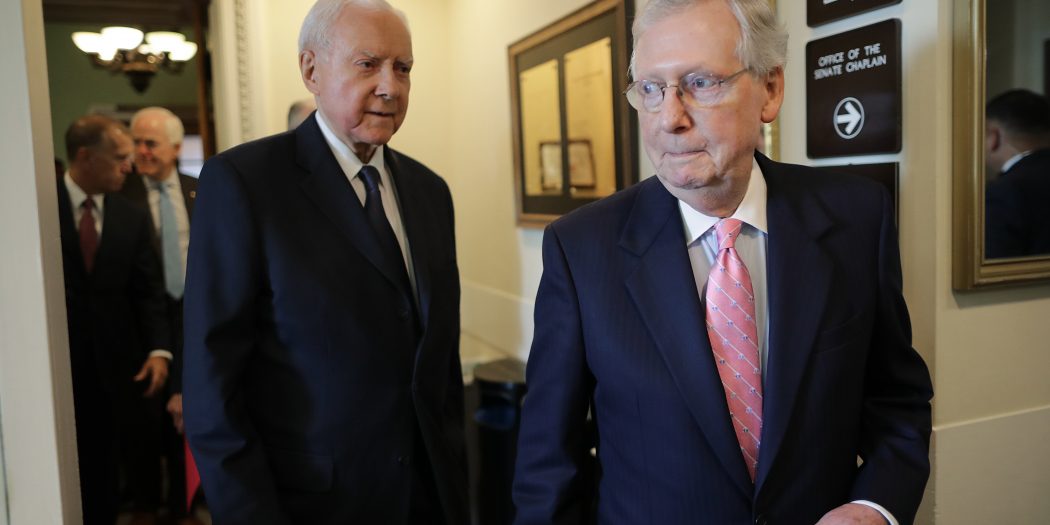 Brett Kavanaugh’s nomination to the Supreme Court cleared a key procedural hurdle in the Senate on Friday, 51-49. A final vote on his confirmation is expected as soon as Saturday. President Trump tweeted that he was “very proud” of the Senate for taking the critical step.

One Democrat, Sen. Joe Manchin of West Virginia, voted with Republicans to end debate and move the nomination forward. One Republican, Sen. Lisa Murkowski of Alaska, voted with Democrats against ending debate.

Still, the fate of Kavanaugh’s nomination remains unclear. Sen. Susan Collins, R-Maine, voted to end debate, but said she will announce her final position on whether to confirm Kavanaugh on Friday afternoon. Other senators could switch their votes as well.

In a speech leading up to the vote, Judiciary Committee Chairman Sen. Chuck Grassley, R-Iowa, said “the resistance is located right here on Capitol Hill,'” and he urged his colleagues to “say no to mob rule” by voting to confirm Kavanaugh.

The top Democrat on the panel, Sen. Dianne Feinstein of California, said Republicans have “largely chosen to ignore the testimony” of Christine Blasey Ford, who accused Kavanaugh of sexually assaulting her when they were teenagers.

President Trump, in a tweet Friday morning, criticized what he termed “the very rude elevator screamers,” who he said are “paid professionals only looking to make Senators look bad!” Without evidence, he alleged that the protesters, several of whom said they have been sexual assault victims, were “paid by [financier George] Soros and others.”

Senators had one day to review a confidential supplemental background check into Kavanaugh’s behavior in the early- to mid-1980s when he was in high school and college. The closely guarded collection of interviews is celebrated by Republican leaders as concrete proof that Kavanaugh did not harass or abuse women. Democrats say the interviews, which they originally requested, are incomplete and inconclusive.

The FBI report did little to alleviate a bitter partisan fight over Kavanaugh’s nomination. Senate Majority Leader Mitch McConnell, R-Ky., announced Thursday that the Senate would proceed anyway with the Friday procedural vote.

Kavanaugh took an unusual step to boost his nomination Thursday evening, writing an op-ed in The Wall Street Journal expressing regret for the heated tone of his testimony before the Senate Judiciary Committee last week, including comments decrying Democratic attacks, that was seen by some wavering senators as too partisan.

“I was very emotional last Thursday, more so than I have ever been. I might have been too emotional at times. I know that my tone was sharp, and I said a few things I should not have said,” Kavanaugh wrote.

The White House defended Kavanaugh’s demeanor during the hearings.

“Any human being who has been falsely accused of a range of things including gang rape has a right to be upset, has a right to be angry, and that’s what we saw last week,” said White House spokesperson Kerri Kupec during an interview with Morning Edition.

McConnell received the 51 votes needed to clear the procedural hurdle on Friday. Republicans have enough votes to assure Kavanaugh’s nomination on their own, but only if they win the support of Collins as well as Murkowski, R-Alaska; and Jeff Flake, R-Ariz., who withheld judgment while the FBI completed its work.

All three spent hours in a secure room in the basement of the Capitol on Thursday reviewing the roughly 45 pages of FBI interviews. Collins and Flake both say the investigation was thorough, but neither would say whether they are now prepared to vote to confirm Kavanaugh.

Flake forced Republicans to launch the additional investigation last week after a tense negotiation with Senate Judiciary Committee Democrats. Flake spent a large portion of the afternoon reviewing the FBI work and said he saw no new evidence to corroborate any of the claims against Kavanaugh, which Flake had previously indicated would mean he will vote to confirm.

Democrats saw something very different in the report. Several criticized Republicans for limiting the FBI investigation to just nine interviews. They said the process ignored many potential witnesses, including Ford.

The FBI also apparently did not interview Kavanaugh.

“Judge Kavanaugh stated at his hearing that the individuals at the incident involving Dr. Ford refuted her version of events,” Schumer said Thursday. “From their own public statements, we knew that to be false, and nothing in this report changes that.”

Similar concerns moved Sen. Heidi Heitkamp, D-N.D., to announce Thursday that she would oppose Kavanaugh. Heitkamp is one of the most vulnerable Democrats on the ballot in November and has seen her poll numbers slip in recent weeks. She’s running for re-election in a state president Trump won in 2016 by more than 35 points.

Heitkamp said she was troubled by Kavanaugh’s aggressive appearance before the Senate Judiciary Committee and the message his confirmation would send to women and girls across the country.

“When considering a lifetime appointment to Supreme Court, we must evaluate the totality of the circumstances and record before us,” Heitkamp said in a statement. “In addition to the concerns about his past conduct, last Thursday’s hearing called into question Judge Kavanaugh’s current temperament, honesty, and impartiality.”

Her opposition leaves Manchin, as the only publicly undecided Democrat on final passage. He is also in a tough re-election campaign and was silent on Kavanaugh in the days leading up to the vote.

The nomination now hangs on the decisions of Collins, Murkowski, Flake and Manchin.

National Public Radio is based in Washington D.C.
Previous Watch Live:Senate Cloture Vote On Kavanaugh
Next Oct. 5, 2018: News in 90