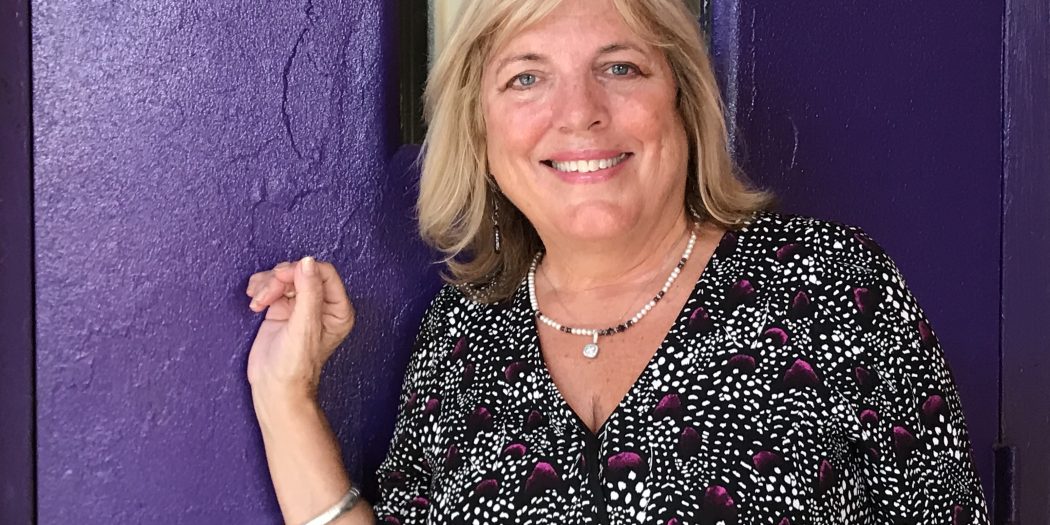 Linda Awbrey was Andrew Gillum's adviser when he was a student at Gainesville High School in the late 1990s. She predicted in 1997 that Gillum would eventually be elected governor. (Tranelle Maner / WUFT News)

During her 40-year career as a teacher and student activities director at Gainesville High School, Linda Awbrey opened the eyes of countless future community leaders and servants.

In the 1990s, Awbrey helped push to diversify the school’s student government. Andrew Gillum, while still a freshman, was among those she recruited. He started as a senator, served as president as a sophomore and rose to a state district position as a junior.

“I wouldn’t be running for governor without the help of teachers and people like Linda Awbrey.” – Andrew Gillum

In spring 1997, Gillum told Awbrey he wanted to be state parliamentarian as a senior. She explained that state leaders typically came from larger cities. He ran anyway, but the regional segregation at the annual conference discouraged him. Described by former students as always inspiring and supportive, Awbrey urged him to stay in the race – and he won.

That’s when the woman who Gainesville High Principal David Shelnutt calls a legend made a prediction that could soon be prescient.

“I told him, ‘Andrew, one day you’re going to be governor of this state,’” Awbrey, who retired in 2016, recalled recently, “and he replied, ‘I would really like to do that.’”

Gillum, the mayor of Tallahassee, is the Democratic nominee running against Republican Ron DeSantis in the Florida gubernatorial election next month.

“I wouldn’t be running for governor without the help of teachers and people like Linda Awbrey,” he said in an email this week to WUFT News. “At Gainesville High School, she taught me I could be anything – and just how much I could truly help people. She’s an everyday hero.”

“She’s one of the ones you remember, an excellent motivator,” Poe said. “Her gift in a very sincere way is allowing each person she comes in contact with to know they can achieve what they want.”

Gerard Williams first met Awbrey 14 years ago during his freshman year at Gainesville High. Williams said he had a previous interest in student government during middle school, but Awbrey showed him and his peers the leadership opportunities available to them.

“She really empowered the students in a unique way,” Williams, 27, said. “When it came to her, she was open to what students wanted to do and held her commitments.”

Danny Harris was in Awbrey’s Spanish class all four of his years at Gainesville High, and helped her create the “2-2-2” initiative to further diversity in student government. The goal: Having at least two African-American students, two who were white and two from another ethnicity.

“She helped develop students’ civic interests,” said Harris, 47, who works in marketing in California. “She’s probably one of the most influential people in my life outside of my family.”

“She spent countless hours with students making sure things were done well,” he said.

In 2017, Gillum, a Miami native, asked Awbrey to help introduce him at his gubernatorial campaign kickoff rally at Kleman Plaza in Tallahassee.

“When he asked me on the phone, I told him I was flattered, but that he needed someone better, more famous,” she recalled. “But he told me, ‘I want you to do it. It means a lot to me.”

On Aug. 28, primary election day in Florida, all Awbrey wanted for her birthday was for Gillum to win the nomination. While driving that night to a friend’s wedding in Colorado, she got a surprise voicemail message. He had called to share the news of his upset victory.

“I love you,” the candidate told her in the 33-second message. “I would not be here without you – and I’m just so thankful for your friendship and your support.”

Andrew Gillum left this voicemail message for Awbrey on her birthday on Aug. 28, the same night he won the Democratic nomination for governor.

She told WUFT News: “I got so choked up looking at the numbers I could barely eat my food.”

As Awbrey continues phone-banking for Gillum, she hopes that her 1997 prediction comes true.

“I think he’s going to pull this off,” she said, speaking with the pride of a former teacher, “and he will go down as one of the best governors we’ve ever had.”