Zanes will be discussing his intimate biography of Tom Petty, the New York Times Bestseller and one of Rolling Stone’s 10 Best Music Books of 2015. Interviewing Zanes at the event will be journalism Professor Clay Calvert, director of the Marion B. Brechner First Amendment Project. Calvert is teaching a course based on Zanes’ book, Petty: The Biography, this semester.

Warren Zanes has written several other music-related books and consulted on the Oscar-winning documentary 20 Feet from Stardom, Martin Scorsese’s documentary George Harrison: Living in the Material World, and the recent PBS series, Soundbreaking: Stories from the Cutting Edge of Recorded Music.

Zanes holds a PhD in visual and cultural studies from the University of Rochester and was Vice President of Education at the Rock and Roll Hall of Fame and executive director of Steven Van Zandt’s Rock and Roll Forever Foundation.

Warren Zanes met Tom Petty when his band, The Del Fuegos, opened for Tom Petty & The Heartbreakers for three months in 1987. He returned to recording in in the 2000’s and his recently completed fourth solo album is called, The Biggest Bankrupt City in the World! 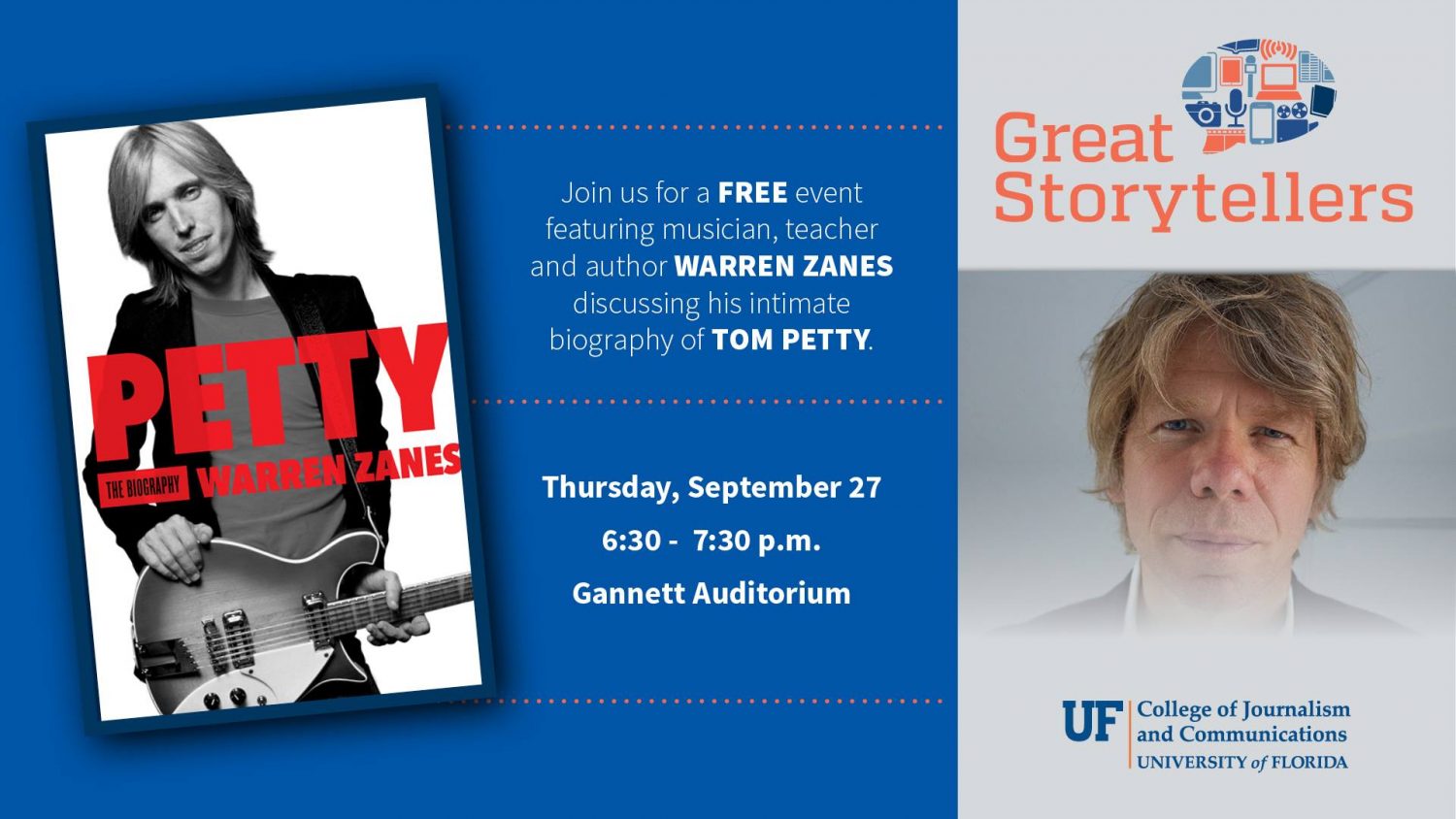 Glenn Richards is Operations Coordinator and local host for Morning Edition on WUFT-FM. His background includes 30+ years of radio in South Florida as an air personality, promotion director, and morning show producer (WSHE, WZTA, & WFLC). His previous education includes a Bachelor of Science in Communication from the University of Miami where he was also general manager of WVUM-FM. Upon his arrival in Gainesville in 2006 to pursue a telecommunication master’s degree at the University of Florida College of Journalism and Communications, he worked as an air personality at WRUF-FM (both Rock104 and Country 103.7 The Gator). One of Glenn’s passions is local music. Since 1990, he has produced and hosted local music programs in both South Florida and Gainesville, playing demos and independent releases from unsigned artists, many of whom went on to national prominence including: Marilyn Manson, Sister Hazel, For Squirrels, Matchbox 20, Saigon Kick, Mary Karlzen, Nil Lara, Hundred Waters, and more.
Previous Law Enforcement Personnel Stand In for Fathers on “Dads Bring Your Child to School Day”
Next WATCH LIVE: Kavanaugh, Ford Testify About Sexual Assault Allegation