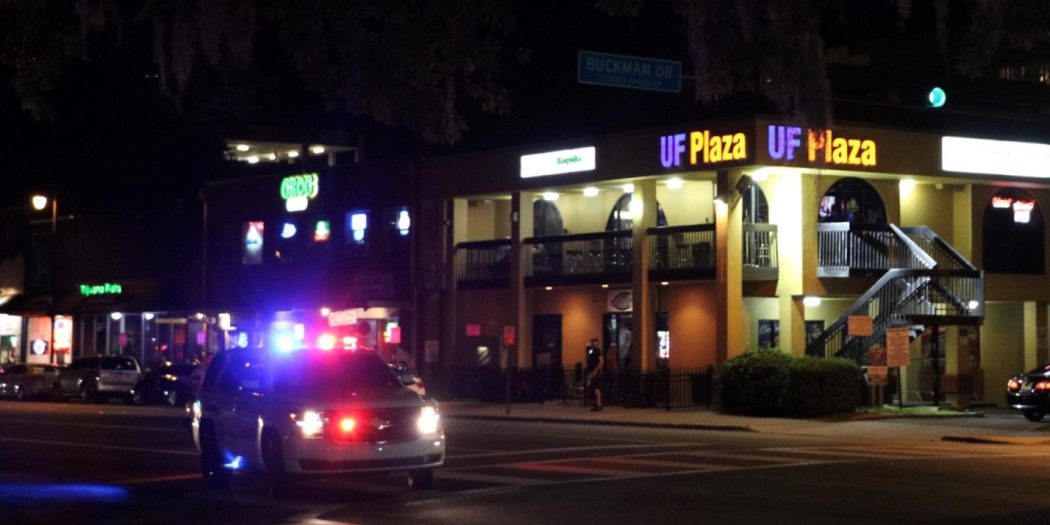 A UFPD police car turning onto Buckman Drive, which divides the 1600 and 1700 blocks of West University Avenue known as Midtown. (Joshua Baker/WUFT News)

Gina Mulhearn knows how crazy West University Avenue in the Midtown section of Gainesville gets during peak business hours.

“Some people can get rowdy,” said Mulhearn, a student at Santa Fe College, who works at a pizzeria on the strip across from the University of Florida. “But it’s mostly just drunk people doing crazy things by trying to impress their friends.”

While Mulhearn said most people there just want to have a good time, the numbers tell another story. There have been 1,020 crime incidents reported in the 1600 and 1700 blocks of both Northwest First Avenue and West University Avenue over the past five years, according to data compiled and made available on the city’s website.

“Not a lot of great things happen after the bars close,” said Sarah Vidal-Finn, director of the Gainesville Community Redevelopment Agency (CRA).

“There’s been everything from sexual assaults to robberies – all the types of crimes that happen around entertainment districts,” she said. “We’re trying to make sure people get home safely.”

The CRA board, composed of the Gainesville City Commission, last month approved a $400,000 initiative as part of its 2019-20 budget aimed at furthering its efforts to make Midtown and surrounding College Park neighborhood safer. The money is to pay for unarmed security officers who would walk the streets and try to squash trouble before any need to summon police.

The actual position is still in the development phase, but Vidal-Finn said that it would not necessarily be a uniformed officer, but a mediator between the police and public.

“They would be the eyes on the street, but also someone who really gets to know what goes on around Midtown,” Vidal-Finn said. “A person that anyone down there could come to.”

The CRA’s fiscal calendar begins Oct. 1, which is when funding will be allocated to further the development of the security position, Vidal-Finn said. The CRA has set aside $200,000 in its budget for both the 2019 and 2020 financial years, she said. The agency does not yet know how many people would be hired for the position or when people can expect to see them in Midtown.

Florida law allows the CRA to provide funding to policing projects for up to three years.

Vidal-Finn said that the security position would be similar to ambassadors at Depot Park in Gainesville, whose duties include answering questions from the public and patrolling facilities. The preferred candidates would also have a background in security, she said.

Ryan Prodesky, a manager at The Swamp Restaurant on West University Avenue, said he generally feels safe living and working in Midtown, but still praised any efforts make it safer.

“Any time you can improve community policing efforts and get people more familiar with who’s the ‘go-to’ in the area, that’s a good thing,” he said.

Prodesky said that he would like to see problems addressed in the residential neighborhoods north of the commercial strip comprised of West University and Northwest First Avenues.

“Up here there’s lighting, people and activity,” said Prodesky, referring to the business district. “Further down, it’s less active and people could be more vulnerable.”

“We’re trying to make Midtown a safer place for everybody,” she said.

Joshua is a reporter for WUFT News who can be reached by calling 352-392-6397 or emailing news@wuft.org.
Previous Man Arrested On Charges Of Aggravated Stalking Of Alachua County NAACP Leader
Next The Number of Dog Bites Rose The Past Four Years In Alachua County. No One Quite Knows Why.