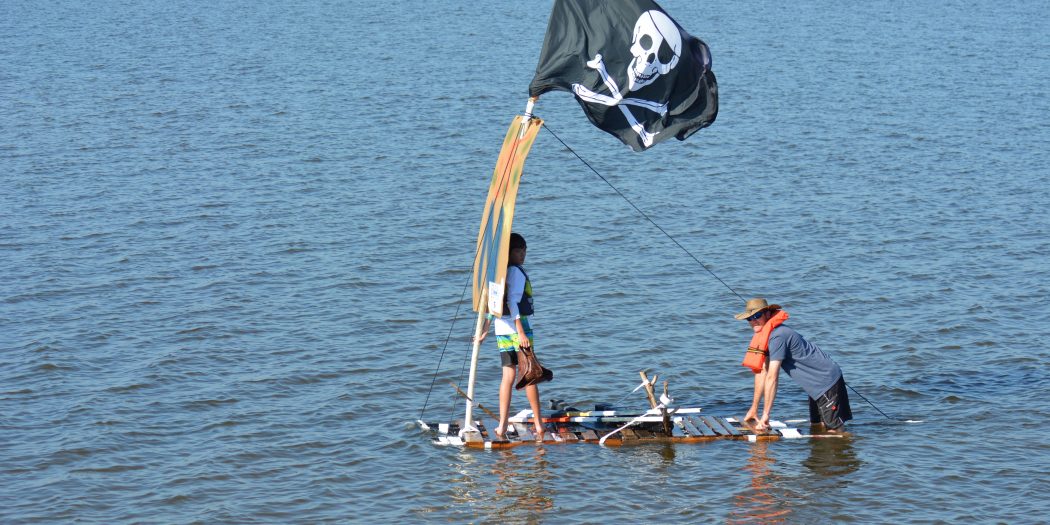 Thomas Johnston, 12, and his uncle, Ceday Key Mayor Heath Davis, 40, push toward the finish line near C Street in their unnamed vessel. After coming in second for fastest boat overall, the two joked that next year's boat would be called "Chuckie's Revenge" for the boat's doll head mascot. (Caitlin Ostroff/WUFT News)

Workout On The Waterfront Raises More Than $5,000 For Cedar Key Aquarium

By Brooke Azzaro and Caitlin Ostroff

Taking in the homemade boats, made from recyclable materials, Sue Colson watched with excitement and skepticism.

“I saw one or two of them down there. I’m not going to give it away, but if they float, God help us,” the 70-year-old Cedar Key city commissioner said. “I hope everyone is ready to be wet.”

Colson was among about 75 people who gathered to watch the first annual Workout on the Waterfront on Saturday, where seven teams built boats out of cardboard, plastic and other items for the Repurpose-It-Regatta. The University of Florida’s Institute of Food and Agricultural Sciences Nature Coast Biological Station hosted the event.

Organizers started planning the day last summer to raise money for the biological station to build an aquarium, purchase audiovisual equipment for the Cedar Key Library and help with the International Coastal Clean-Up, a nonprofit focusing on ocean conservation, said Mendy Allen, the program coordinator for the station.

The cost of the aquarium, which is still in its planning phase, isn’t known yet, Allen said. By the end of the day, the event raised $5,000 from sponsors, donations and a silent auction.

Prior to the regatta, 46 people ran in the Coastal Heritage 5K Run and three kayakers participated in the Astena-Otie Kayak Challenge, where participants raced from Lil Shark Park to Astena-Otie Key and back.

At 10 a.m., seven boats started lining up in the water off of Second Street and G Street for a roughly quarter-mile race.

Charlie Martin, a 35-year-old Cedar Key resident, was among the first to set down his creation at the water’s edge. He built “The Intimidator” in about two hours from cardboard, PVC pipe and duct tape.

The Intimidator was Martin’s second attempt at a boat and he decided not to test its buoyancy before placing it in the water, he said.

“I’m a little apprehensive about The Intimidator and it’s ability to actually finish the race — or to float at all,” said Martin, a researcher at the biological station.

After Martin, the crew of “The Percival-Hunt,” brought their boat out for the race. It took two months to make, and was constructed of debris from the Lower-Suwannee River, including nails pulled from two derelict docks, said Franklin Percival, a 73-year-old Gainesville resident.

At 10:30 a.m., the race was set to begin. For some participants, paddling up to the starting line was simple. For others, it was a challenge, with one boat capsizing about 300 feet before it.

With the long, loud blast of an air horn, the six remaining boats headed south, around the key and toward the C Street bridge.

Spectators gathered along the shores to watch the regatta unfold, cheering for their favorite boats. Families and friends piled in golf-carts and headed to the finish line near Cedar Key’s Island Place Condos while others walked along the shore.

With a time of 13 minutes, “The Percival Hunt” finished first. But, a piece of un-retrieved debris floating in the water and the styrofoam used to construct the boat led to it’s disqualification for the “Fastest Boat” award.

It later won “The Pirate Heat” award, for being the fastest but breaking the rules. The trophies were also made of recyclable and natural items, like plastic bottles, rocks and wood.

After “The Percival Hunt,” Cedar Key Mayor Heath Davis finished, winning the fastest boat award with his vessel made with his 12-year-old nephew. One Percival team member joked that it reminded him of the movie, Animal House’s deathmobile because of the black pirate flag at the top.

For Colson, she said the event was something typical of Cedar Key, but UF’s community involvement and the plans to build an aquarium at the Station made it larger and more prominent.

“We are a working waterfront and I want to maintain that forever here, as long as we possibly can,” she said. “Without the University we won’t do it. We need to have their help. It’s a partnership.”

Brooke Azzaro is a reporter for WUFT News. She can be reached at brookeazzaro@gmail.com.
@brookeazzaro
Previous March 20, 2017: Morning News In 90
Next Mar. 20, 2017: Afternoon News in 90