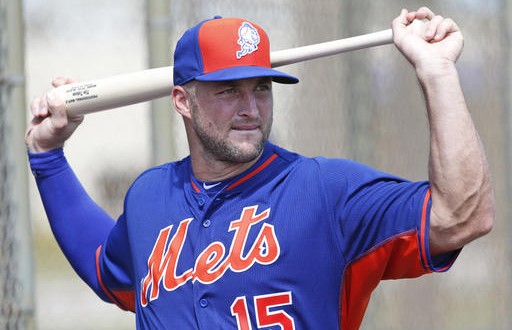 JUPITER — Tim Tebow singled twice and made a diving catch at the right-field warning track, his best day as a professional baseball player.

“I think I’ve had fun every game, genuinely, but I think this one, there was a lot of action,” Tebow said after Wednesday after the New York Mets’ 6-2 loss to the Miami Marlins. “When there’s a lot of action that’s also fun. You like being involved.”

The 29-year-old, a former Heisman Trophy winner, reached in the second against starter Justin Nicolino with a grounder into the hole that shortstop Adeiny Hechavarria knocked down but couldn’t come up with. Tebow line a single to left-center off Stephen Fife leading off the fifth, then slid into the wall in the bottom half to catch J.T. Realmuto’s drive to right that was slicing away from him.

“The wind was blowing extremely hard to the corner, so you knew it was going to carry a little bit farther,” Tebow said.

Tebow also grounded out in the seventh, leaving him with a .214 average (3 for 14) in four games.

“He’s getting better,” Mets manager Terry Collins said. “That was the point. That’s why he’s here: to see if he can make some strides, and he’s made very good strides.”

New York banned Tebow from speaking with media following his second game but allowed him to speak for a little less than four minutes Wednesday.

“I think I’m still figuring out a lot of stuff every day,” Tebow said. “So much of it is still new so it’s still a process.”

Following the game Tebow spent a few minutes with team trainers, who cleaned abrasions on his right elbow cause by the slide on the pebbly warning track.

“I can’t tell from the angle, but that looked like a pretty tough play out there,” Marlins manager Don Mattingly said.

Tebow moved to left field in the sixth, then left after his chopper in the seventh — he almost beat pitcher Dillon Peters, who covered first base.

The Associated Press is a wire service to which WUFT News subscribes.
Previous Florida Could Cut Off Food Stamps From 200,000 Recipients
Next Mar. 16, 2017: Morning News In 90