“People will not move unless they are forced, and for me, sea-level rise was a good enough reason.”Joyce DiBenedetto-Colton

Joyce DiBenedetto-Colton, a retired Miami Dade College educator, at her home in High Springs. DiBenedetto-Colton says she and her husband migrated from Miami to North Central Florida “in great part due to present and impending climate change.” Photo credit: Andrea Cornejo. 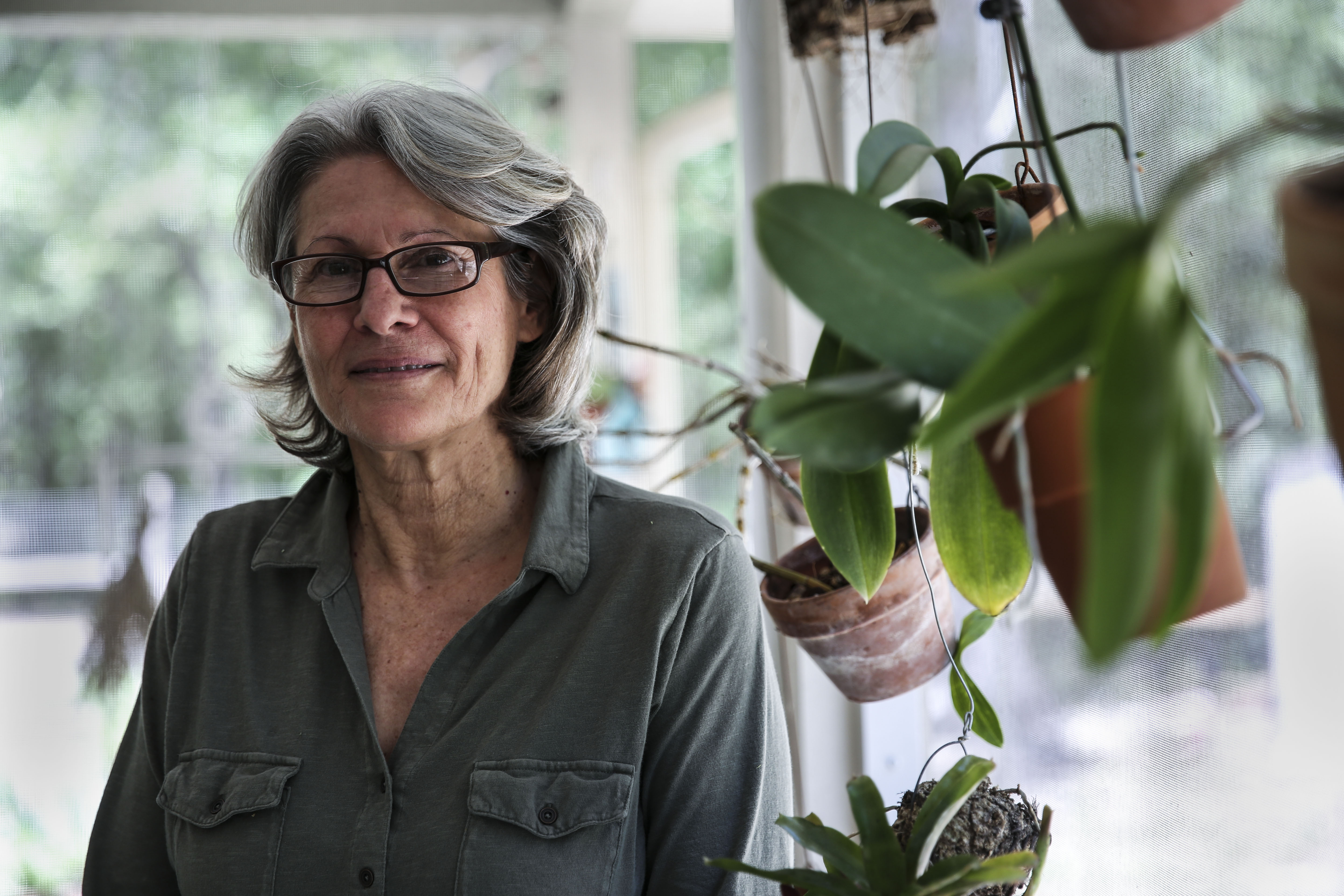 When Hurricane Andrew churned through Miami 24 years ago, Joyce DiBenedetto-Colton felt the divine power of Mother Nature. She and her husband rode out the storm at home. They’ll never forget the howl of the winds and the sound of rain pounding like heavy artillery fire.

When the Category 5 storm had passed and the couple stepped outside to an apocalyptic scene – in all, 25,000 homes were destroyed in the hurricane – they began to rethink living in Miami. More than twenty years later, it was climate change that cinched their migration to High Springs in North Central Florida.

“People will not move unless they are forced, and for me, sea-level rise was a good enough reason,” said DiBenedetto-Colton who retired from Miami Dade College, where she worked for more than 30 years as an instructor and administrator focused on environmental sustainability.

DiBenedetto-Colton and her husband found North Central Florida in the wake of Andrew; the storm sent them on an epic road trip through the American southeast and the arid West to begin thinking about where they would ultimately retire. The West was untenable because of constraints on freshwater. North Central Florida had the water, along with natural beauty and mild climate.

“I believe North Central Florida will be an attractive option to South Floridians, as well as Americans up north,” she says.

DiBenedetto-Colton considers herself one of this region’s early climate-change migrants. She and others tracking climate change and sea-level rise predict that she will be followed by many others. According to the U.S Census Bureau, just over 75 percent of Florida’s population resides in coastal counties. A new report in the scientific journal Nature Climate Change finds that up to 13 million people, with up to half of those in Florida, could be forced to adapt or flee their homes if seas rise 1.8 meters by 2100 as many scientists project.

Between 2000 and 2008, the coastal population increased by 1,585,488 people, and now Florida’s property values are back to rising along with the crowds. But that can’t continue for long, says Gainesville environmental scientist Stephen Mulkey, the retired president of Unity College in Maine and scientific advisor to former Florida Gov. Charlie Crist. Mulkey predicts that “property value in the coastal regions will start to lose value within 10 years” due to sea-level rise and other climate-change impacts. As coastal-dwellers are displaced, they will look for inland locations with stable infrastructure, schools and residential areas that offer quality of life for families. Mulkey says North Central Florida’s protection from sea-level rise, freshwater resources and quality indicators including the University of Florida and Santa Fe College will all help make it a major hub for migrants.

Mid-century, migration could become much more significant, Mulkey predicts, with thousands of people in coastal regions forced to migrate. Tim Jackson, a director of real estate at Weyerhaeuser (formerly known as Plum Creek), the timber company working to develop real estate in eastern Alachua County agrees. Jackson says that coastal reconstruction will not be feasible; inland counties should plan long-term to avoid the development mistakes made in the overcrowded coasts.

The expansion of agriculture is another angle to climate migration that could impact North Central Florida. Some coastal farms are already experiencing saltwater intrusion into freshwater wells. Meanwhile some western agricultural concerns are looking to relocate to the relatively wet East. Jack Payne, senior vice president for agriculture and natural resources at UF, observed at this spring’s Water Institute conference that “while some of our farmland is going to subdivisions, agricultural investors in California fleeing a historic drought are hedging their bets by buying up Florida agricultural land.”

As severe drought in the arid West has put pressure on water for farms and cattle operations, the southeastern United States is being eyed for its “excess” of water, in the words of Paul Pittman, CEO of Farmland Partners, a Real Estate Investment Trust in the farm-leasing business. REIT Gladstone Land, which has been buying up Florida farmland in addition to investments elsewhere in the country, now owns more land in Florida than in California, at 35 percent of its total acreage versus 29 percent in California.

What remains to be seen is just how much in-migration North Central Florida will experience – and whether the region is equipped to support the additional people and agriculture in ways that sustain our own water and quality of life. “When you think about it, we are lucky that we’re not forced migrants – as are so many people impacted by climate change in other parts of the world,” says DiBenedetto-Colton. “We are fortunate to have an opportunity to plan.”