Turtle Tracking: How One Group’s Data Tells The Story of an Ecosystem’s Health

The North American Freshwater Turtle Research Group, which operates under an international nonprofit called the Turtle Survival Alliance, conducts population samples at more than 10 sites around the U.S. Eight sites are in Florida, one is in Texas and one is in Tennessee. The group samples three times per year in Florida — in the spring, summer and fall — and gathers information about population density and measurements of individual turtles. From their data acquisition, the group can tell a lot about ecosystem health and water quality, said Eric Munscher, the principal coordinator for the group.

From March 19 to March 27, a group of volunteers caught 1,047 turtles in eight springs around North-Central Florida. They measured the turtles and made sure they were tagged with a microchip, called a Passive Integrated Transponder, or PIT, tag. Volunteers also used a numbering system to mark each turtle’s shell with a unique identification number. Munscher swims with three loggerhead musk turtles in one hand at the blue hole at Ichetucknee Springs State Park on March 20. This year, the group saw its second-highest catch number in Florida, trailing last year’s study by just 63 turtles. Two canoeists wait for snorkelers to give them turtles in the Wekiwa Springs State Park lagoon on March 22. Because the sample areas are so large, a fleet of canoes accompanies snorkelers and transports the turtles they catch. 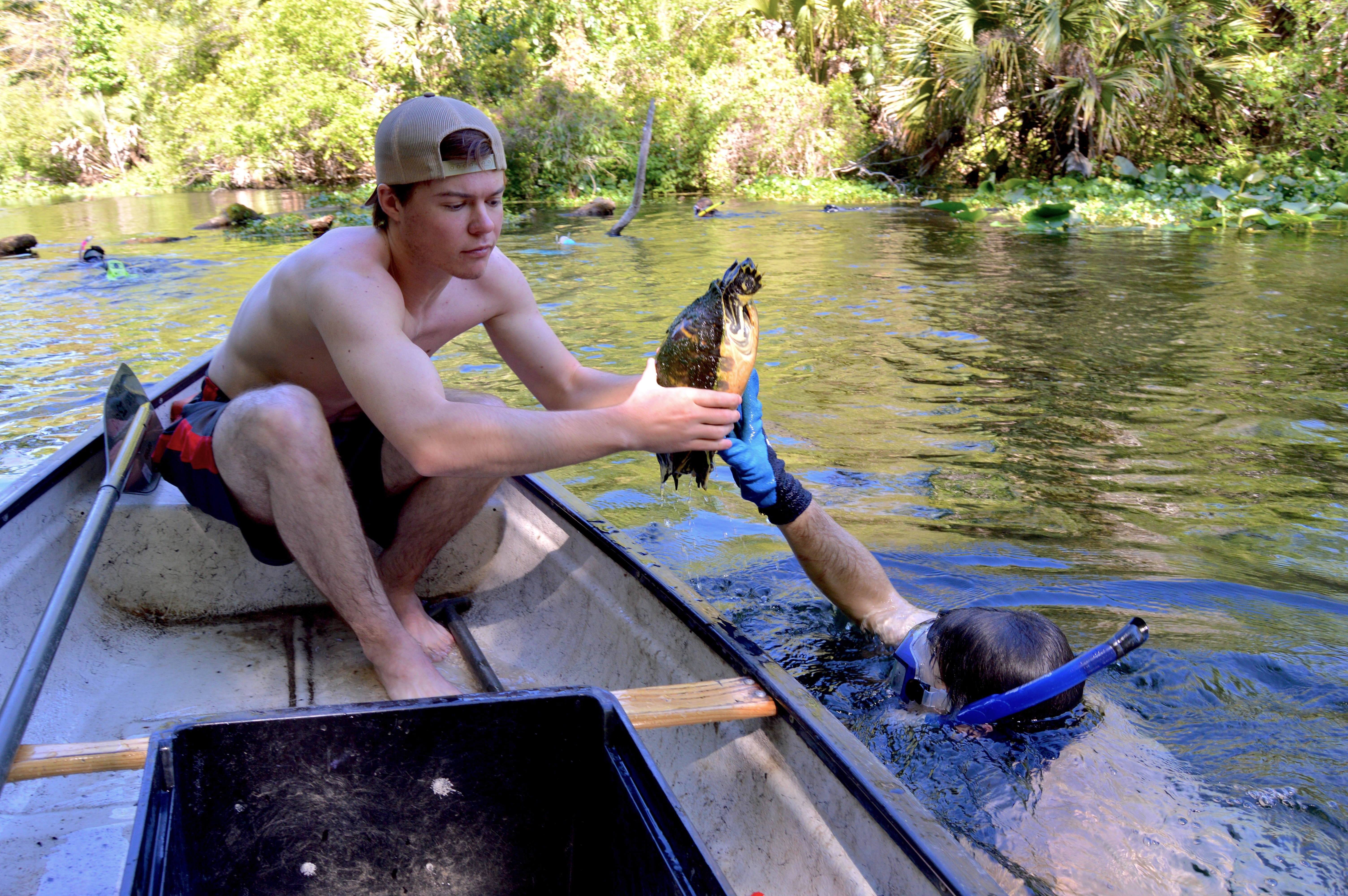 Kyle Robertson, 22, left, takes a turtle from snorkeler Ben Williams, 24, at Wekiwa Springs on March 22. The group started sampling at Wekiwa in 1999, Munscher said. At the time, Orlando was losing a lot of recharge water for the aquifer due to metropolitan expansion. “The springs in that area were getting severely impacted through water loss,” he said. “We decided to do the long-term monitoring for turtles because turtles are a very good indicator of ecosystem health. They’re often considered a keystone species.” Munscher measures the carapace, or upper shell, length of a turtle at Wekiwa Springs on March 21. The group measures various parts of the turtles’ shells as well as weights, heights and, of some species, head widths. Munscher uses a Dremel rotary tool to saw a hard mark into a turtle’s shell at Wekiwa Springs on March 21. This does not hurt the turtle. Marking turtles gives the group a way to identify re-captures, which can help with population analysis and show survivability over time. “We’re still catching turtles that we marked in 1999, 2000,” Munscher said. “That turtle could’ve been 30 years old back then — we don’t know — but we’re still catching that turtle. So the turtles are living a very long time in that habitat, which is a very good indicator that they prefer it, they use it and it still meets most of their needs.” Lee Barton, a volunteer from Freed-Hardeman University in Tennessee, uses a tattoo gun to mark a softshell turtle at Wekiwa Springs on March 21. Because their shells are so flexible and do not have the same patterns to apply the marking system used on other turtles, volunteers tattoo them with their unique numbers. 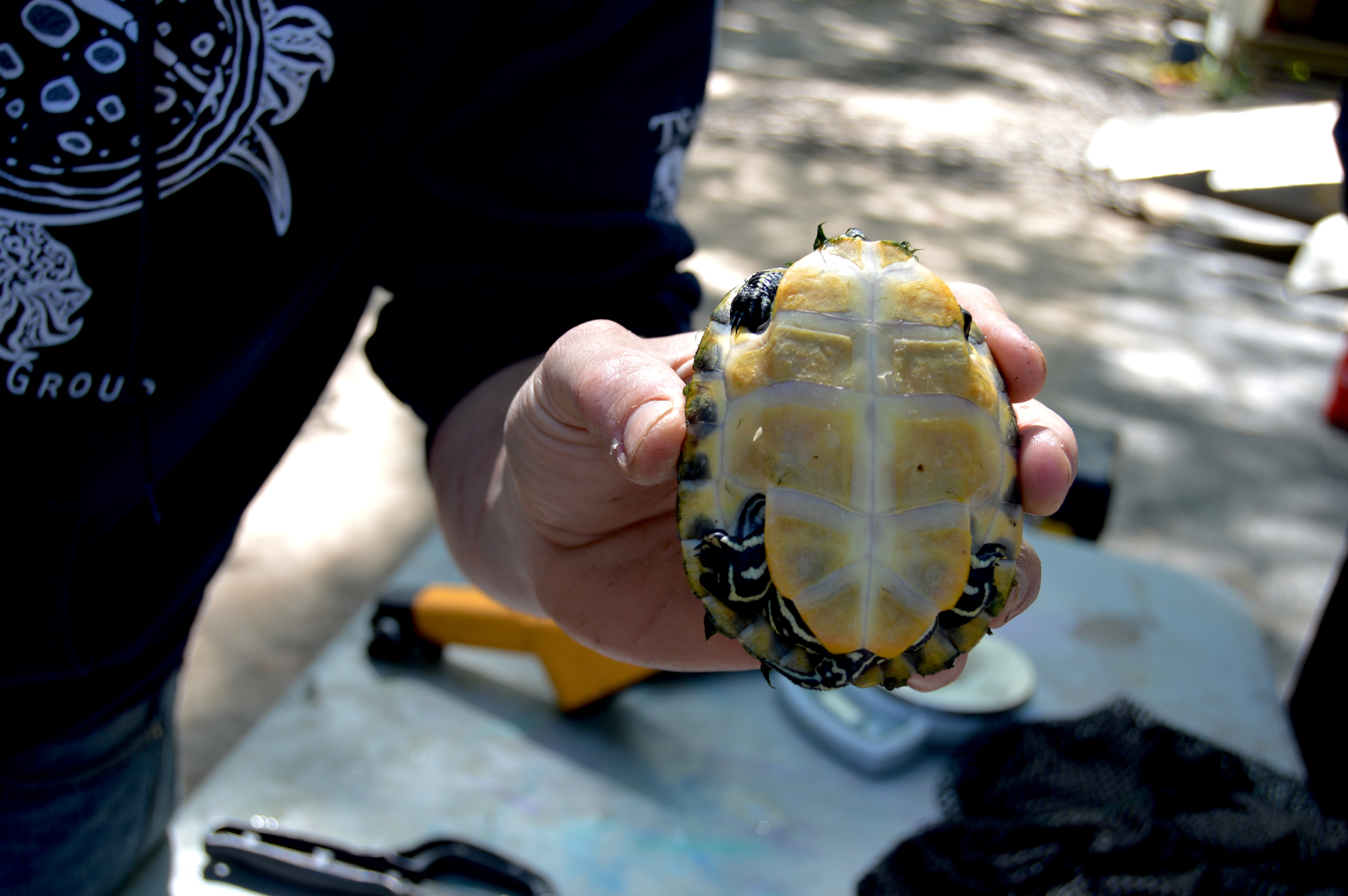 The lighter parts of this turtle’s plastron, or under part of the shell, show recent growth. Munscher said turtles eat almost constantly when they’re young to reach reproductive age. “They’re putting all their energy they take in from their food to get bigger,” he said. “They need a healthy environment that has an abundance of food to do that.” Brian Hague, a founder of the research group, carries a snapping turtle to be processed at Wekiwa Springs on March 23. A large crowd of bystanders usually congregates around the larger turtles, especially at big parks, like Wekiwa. Collin McAvinchey, a 24-year-old volunteer, said those teaching moments are invaluable. “I’m always inspired by passersby who are super excited about getting to see turtles, especially children,” he said. “I think that allowing people outside of the scientific community to actually witness wildlife is vital for conservation. The more that people see and interact with wildlife, the more that they’ll be inclined to alter their behavior to protect them.” Hague, left, holds a snapping turtle down while Munscher measures its carapace length at Wekiwa Springs on March 23. The group is required to submit all acquired data to the Florida Department of Environmental Protection after its yearlong Research And Collecting Permit expires in late June. 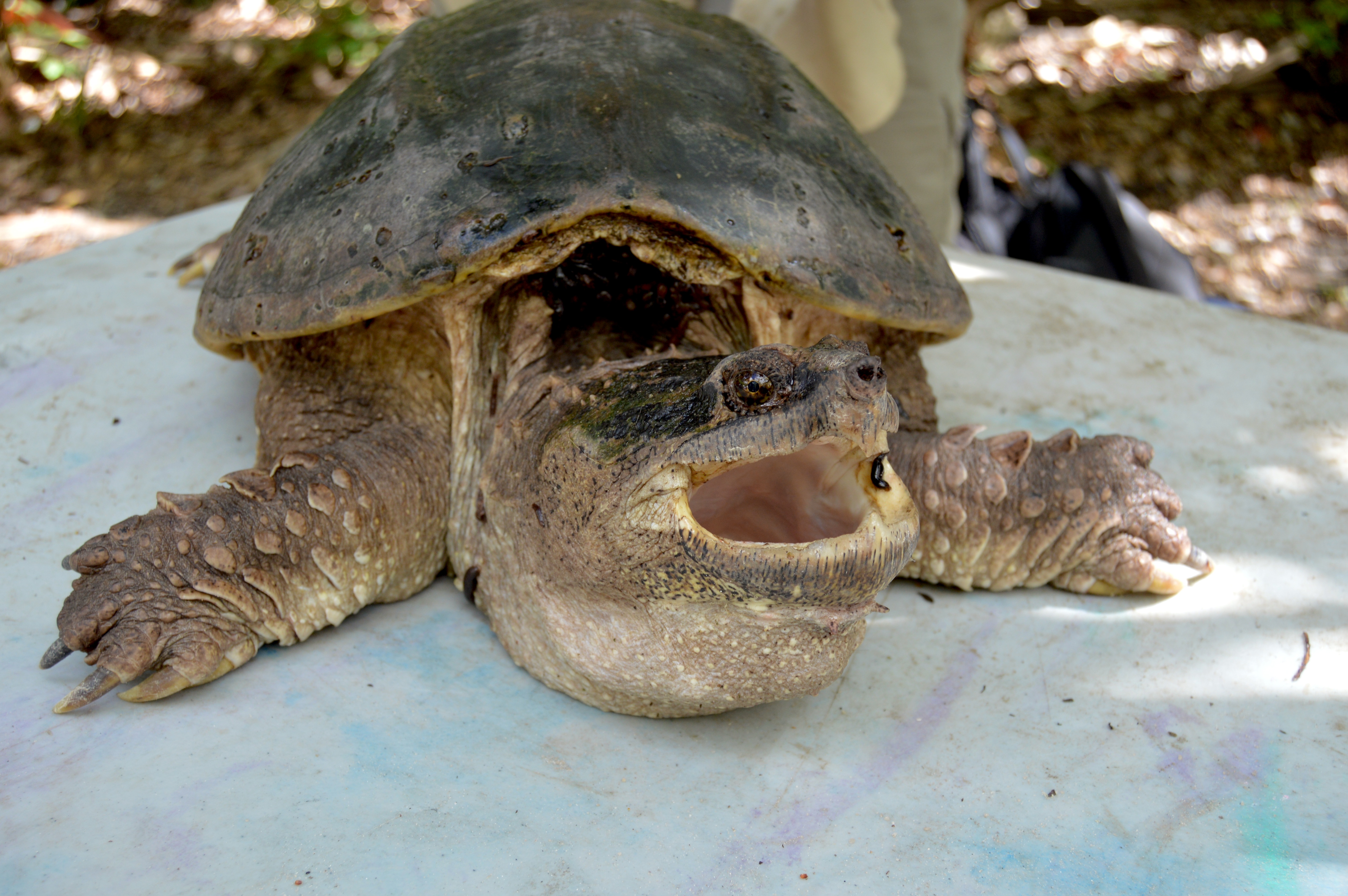 A snapper turtle sits on a table after being measured at Wekiwa Springs on March 23. Alice Bard, a DEP permit coordinator, said the department analyzes the group’s research from each sampled park. “We use it in the field to make sure that the interesting things that they’re finding are also being reflected in our species lists and then in our unit management plans, which help to govern our management of each individual state park,” she said. 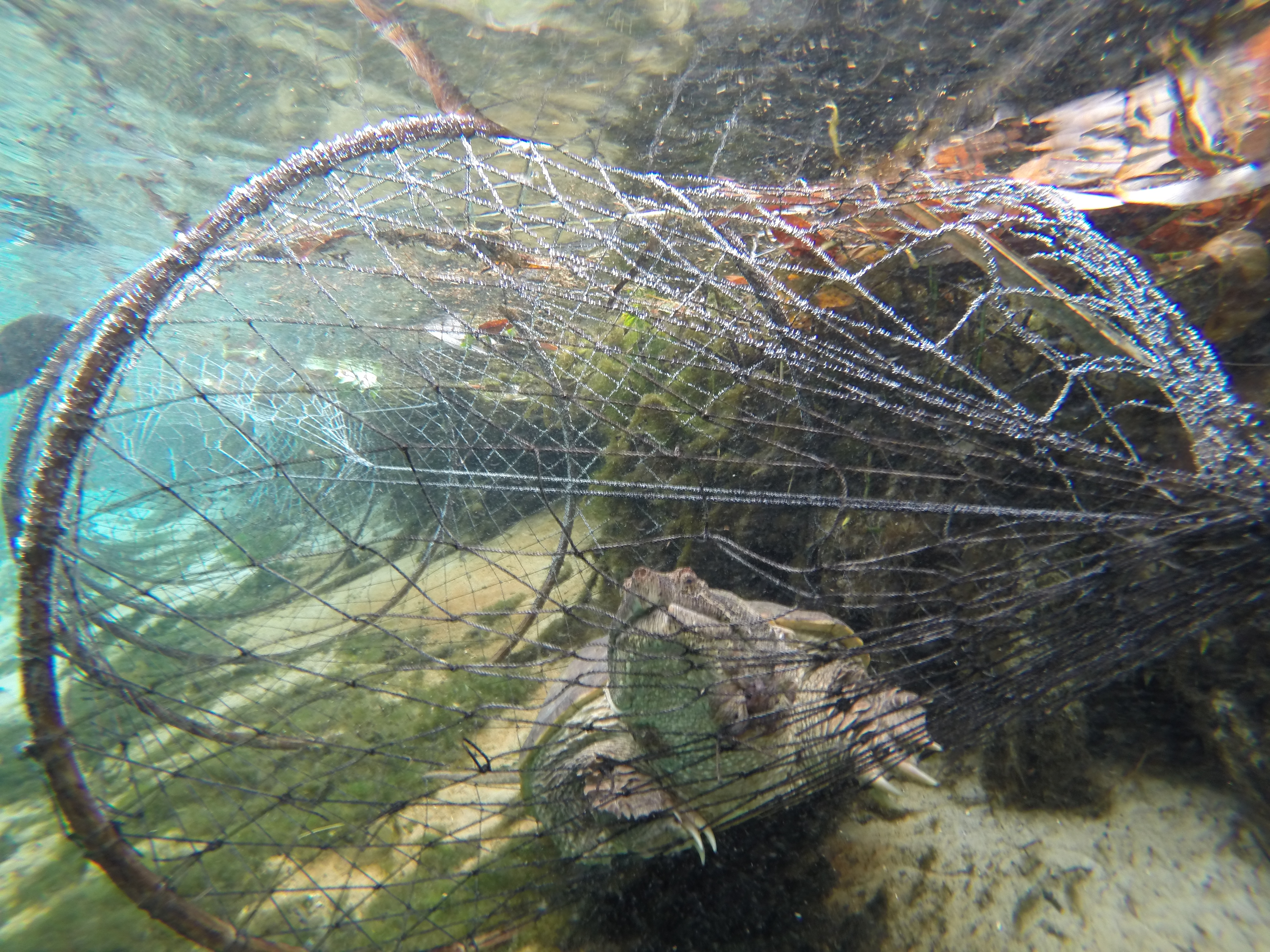 A snapping turtle lies in a trap placed by the group at Weeki Wachee Springs on March 25. The volunteers will occasionally set traps with fruits like melons overnight to catch different species that are harder to find, such as snappers or softshell turtles. Robertson, left, and Tori Hughes, 21, look through eelgrass to find turtles at Weeki Wachee Springs on March 25. Volunteers come from all over the country to work with the research group. McAvinchey traveled from Washington to help catch and process turtles. “There aren’t many opportunities to actually perform rigorous scientific research as a volunteer, and I find it immensely rewarding and educational,” McAvinchey said. “You get to see the whole biological inventory process from start to finish, and that’s a pretty special experience.” Robertson chases after a turtle at Weeki Wachee Springs on March 25. McAvinchey said one main reason he travels cross-country to work with the group is because it’s fun. “I really enjoy it. It’s kind of like a sport; you get a huge rush from catching a turtle,” he said. “Turtle wrangling is the closest you can get in real life to catching the Golden Snitch in ‘Harry Potter’s’ Quidditch.” A turtle swims through the water at Weeki Wachee Springs on March 25. “The sheer magnitude of the springs in Florida makes Florida unique around the globe, and they are the key habitats that are really driving a lot of the other habitats in the state,” Munscher said. “The amount of fresh, clean water coming out of the aquifer from these springs really helps drive these ecosystems and makes them preferred for many species, not just turtles.” Munscher said it is important for the group to publish its data so other scientists can emulate studies and continue research on turtles such as the loggerhead musk turtle pictured. “Even as large of a research group that we are, we’re scratching the surface on everything that can be done,” he said. “There are so many other habitats that can be looked at and that need that long-term monitoring.”

Story and photos by Melissa Smith.