As each bear was strung between two poles, it stained the white concrete block as a biologist checked each one for weight and sex.

The beating sun caused the stench of the blood to linger.

The ice bags stuffed in the bear’s stomach for preservation melted, mixing their cool sweat with the animal’s warm blood. The bear’s black fur stuck to itself — matted and hot.

“Murderers!” screamed a woman in a gold sedan as she drove past the weigh station.

The Florida Fish and Wildlife Conservation Commission, a government organization charged with protecting endangered species, sold over 3,700 hunting permits to kill a maximum of 320 bears.

Proponents suggested it was a natural way to tame overpopulation.

Opponents claimed it was a trophy hunt.

Why Florida decided to bring back the hunt

In 1974, black bears were placed on the list of threatened species, as the population had dwindled to about 400. At the time, hunting was open in three counties. In 1994, hunting season came to a close.

After two decades of protection, the population was estimated around 3,500. Though no formal count had been taken since 2002, the bear was taken off the threatened list in 2012.

“The bear does not meet any criteria for high risk of extinction,” the commission reported.

Conservation groups around the state protested since the hunt was announced.

But many feel the hunt is justified by the bears’ population explosion in recent years, which has led to increased human-bear interactions.

“The bottom line is — when you fill up with people, there’s less habitat for bears,” said Dewey Miller, a hunter.

Once bears become accustomed to humans’ way of life, it’s hard to break habits like eating from trash cans.

“There’s an adage, ‘A fed bear is a dead bear,’” said Eric Hellgren, a professor in the University of Florida’s Department of Wildlife Ecology and Conservation.

In the east panhandle region, covering from Tallahassee to Panama City, the target is 40 out of an estimated 600 bears.

In the central region, stretching from Gainesville to Orlando, the goal is 100 bears. With a total population of about 1,300 bears, that’s where most human-to-bear incidents have been reported, according to the commission.

The north region, from Jacksonville to Suwannee County, with a population of 550, also has a target of 100 bears because of the area’s proximity to the Okefenokee National Wildlife Refuge in Georgia. While the forest has a large bear population, once a bear crosses the Florida-Georgia line, it’s no longer a part of the hunt.

In the south region, from Cape Coral to the Keys, the target is 80 bears, a little more than 10 percent of the region’s population of 700.

The hunt would last a minimum of two days and maximum of seven, according to the commission.

Hunters could set out a half hour before sunrise. Hunting would end a half hour after sunset.

Some claimed a kill, while others missed

He and three of his friends set out early in the morning for Florida’s first legal bear hunt in 21 years.

They lathered in bug spray before sunrise. There were a lot of mosquitos in the Ocala National Forest. But the bugs let up as the sun came out.

A few hours later, Pattermann slowly approached the 252-pound female bear. Then he shot her with his 7mm Remington Magnum rifle.

He plans to bring her to the butcher, he said. He’ll later stand the skin in front of his fireplace. He wants to use every part.

“If not, it’s just a wasteful kill,” he said. “Just going out to kill is not the right thing to do.” 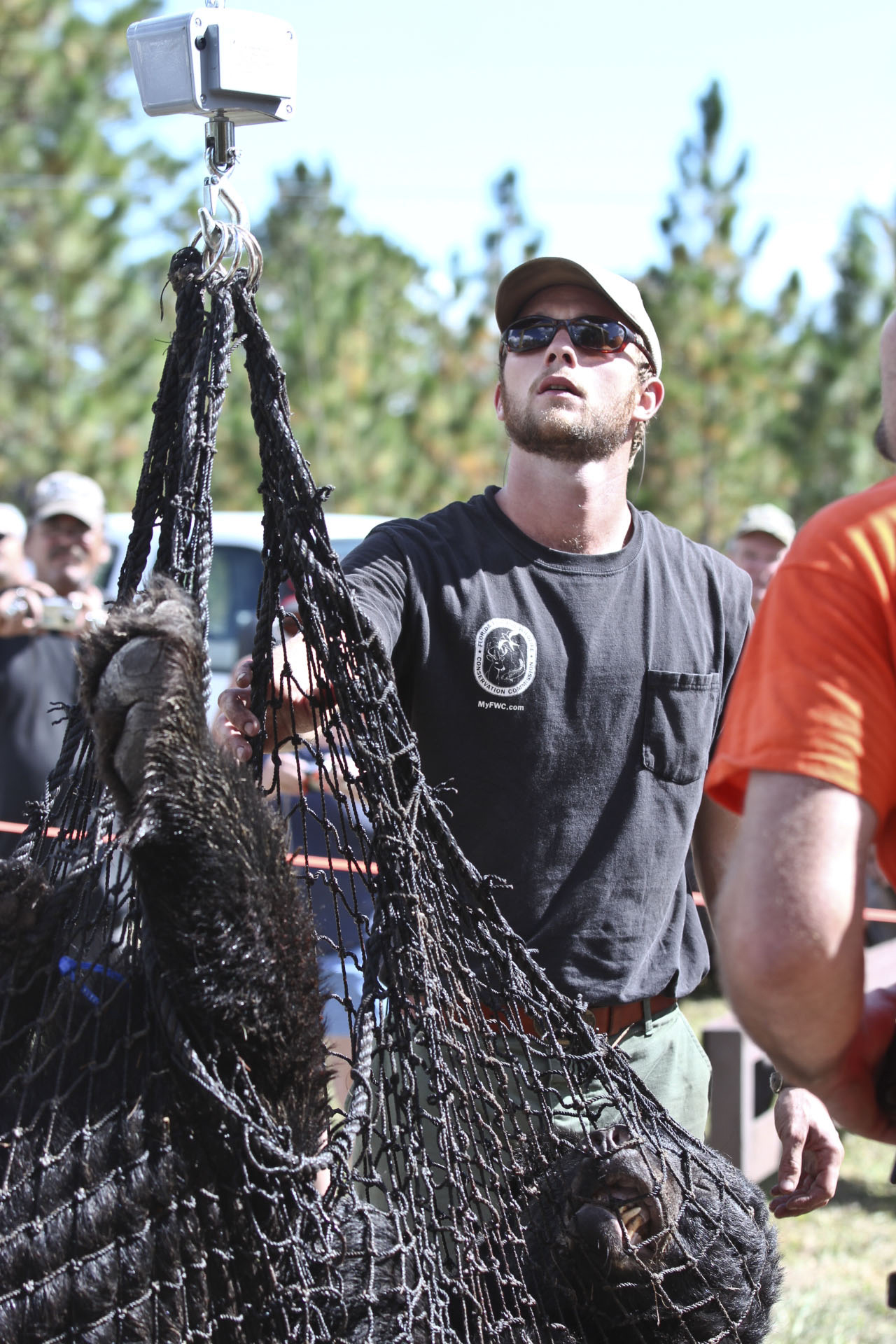 Florida Fish and Wildlife Conservation Commission Biologist Wade Brenner, 26, weighs a 292-pound bear at a check station located at the corner of Forest Road 11 and CR 316 off of the Ocala National Forest. (Andrea Cornejo/ WUFT News)

Pattermann, 33, and his friends started planning the trip in the summer, when the hunt was announced, he said. Between permits, licenses and processing, he will spend about $1,000.

It’s a once-in-a-lifetime opportunity, he said.

It’s a sentiment many other hunters felt.

By night, bear hunting in Central Florida was over. Two-hundred seven bears were killed throughout the state.

The commission allowed for 100 bears to be killed in the central region. The count was 99, leaving room for hunters to bring in kills the next day.

“It went smooth,” said Greg Workman, a commission spokesperson. “We were on-task in the central area.”

Before a bear can be processed, each body must be brought to a check station for weighing and tagging.

Officials extract a tooth to determine the bear’s age. Its waist is measured. A blue tag is clamped onto its left foot before it’s strung up in a black rope net between two wooden poles and weighed by a commission biologist.

At 3 p.m. a bloody 88-pound cub arrived at the Ocala check station in the back of a SUV. The commission requires each bear weigh at least 100 pounds for it to be a legal kill. 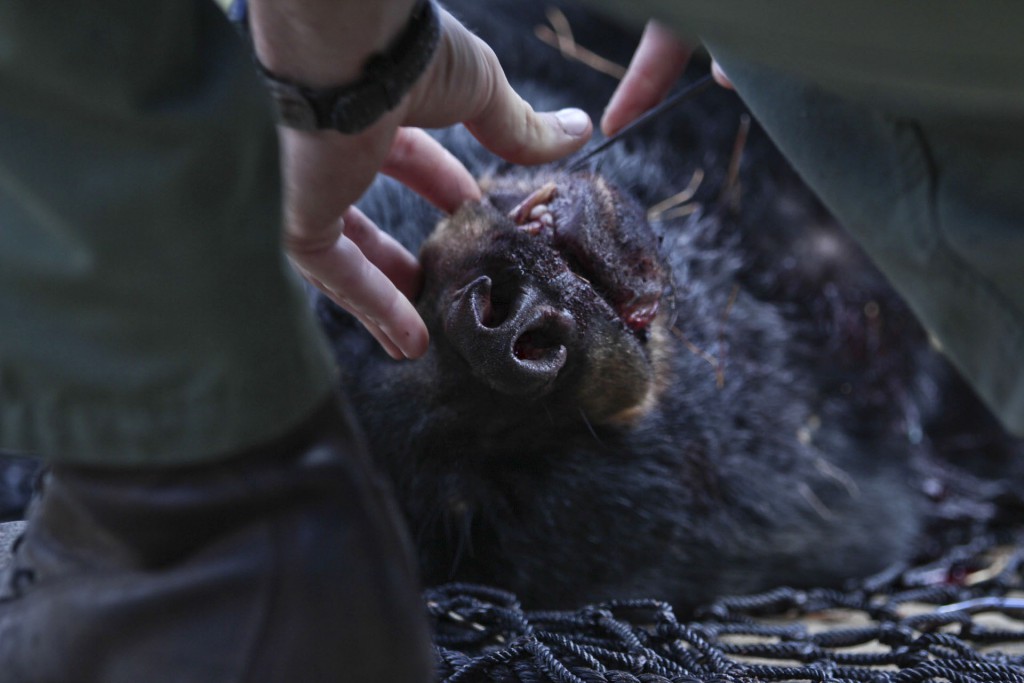 Florida Fish and Wildlife Conservation Commission biologist Wade Brenner, 26, extracts the premolar of a Florida black bear at the Ocala National Forest check station. The small tooth located behind the larger canines can be used to determine the age of the bear. (Andrea Cornejo/WUFT News)

There were a few underweight bears reported, and the commission will look into each case, Workman said. If it’s determined to be grossly underweight, there will be a penalty.

Regardless of weight, each bear killed goes toward the final count.

“They’re not forgotten bears,” Workman said. “They will be accounted for.”

Protesters with Speak Up Wekiva, an environmental organization that tried to stop the hunt, noted the size of the cub.

“It’s just about killing animals, that’s it,” said Brian Brown, 26, an economist and animal rights activist. He believes the hunt should have been called off.

“Most of the reason is for the novelty of it,” he said.

The commission organized the hunt as a way to reduce bear-human interactions. Workman said it is still determining if there will be another hunt in the future.

But there are ways to reduce the population other than this hunt, Brown said.

“It’s 2015 and we really don’t seem to have a problem causing pain and death to animals,” he said.

Hundreds of prizes ready to be preserved

In total, 304 bears were killed in the two-day hunt.

The final numbers include 114 in the east panhandle region (the target was 40) and 143 in the central region (100 was the goal). Totals for the north and south regions were lower than proposed.

Despite issues like baiting and the killing of cubs, the commission said it could bring back the hunt next year.

In March, the commission issued a new bear population number.

Because the count was taken over the 2014 and 2015 summers, the new number, 4,350, does not include the 304 bears killed in the bear hunt in October, said Walter McCown, a bear researcher with the commission in Gainesville.

At the time of the hunt, the commission estimated the population to be about 3,500, nearly 24 percent fewer bears than the newest total.

The count also doesn’t include cubs, of which there could be as many as 2,000, McCown said. According to the commission, the population has increased 60% since 2002, the last time an official count was taken.

For many hunters, the hunt doesn’t end with the kill.

Once bears have been tagged and cleaned, taxidermists turn hunters’ kills into trophies.

After bears are skinned, the owner’s initials are hammered into the hide with a screwdriver. Then the skin is salted to keep from rotting and chemically converted to leather for further preservation.

“It looks so real that you think it’s alive and gonna get cha.”