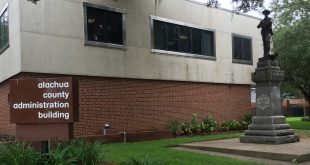 Protesters seeking to remove the downtown statue of the Confederate soldier spoke to city officials for the first time since the campaign began in late June. This is the first of several efforts that will go on over the next two weeks among protesters who call for the County Commission to take down the statue.