The children play on an unpaved driveway that runs along the side of the New Haitian Mission Baptist Church. The church stands as one of the few remaining buildings after the monster Category 5 storm tore through the tiny Bahamian island. For the community, it’s a sanctuary and home to those who lost everything.

A handful of families who settled at the church after Dorian washed away their homes take refuge between rows of beige tents.

Keline, 9, separates herself from the others and flips through some vocabulary workbooks, sounding the words out as she reads.

Keline, 9, finds a coloring book in a backpack given to her by OpenWorld Relief in Marsh Harbour, Abaco. OpenWorld Relief also set up the tents at the Haitian church where Keline lives. (Mackenzie Behm/Fresh Take Florida) 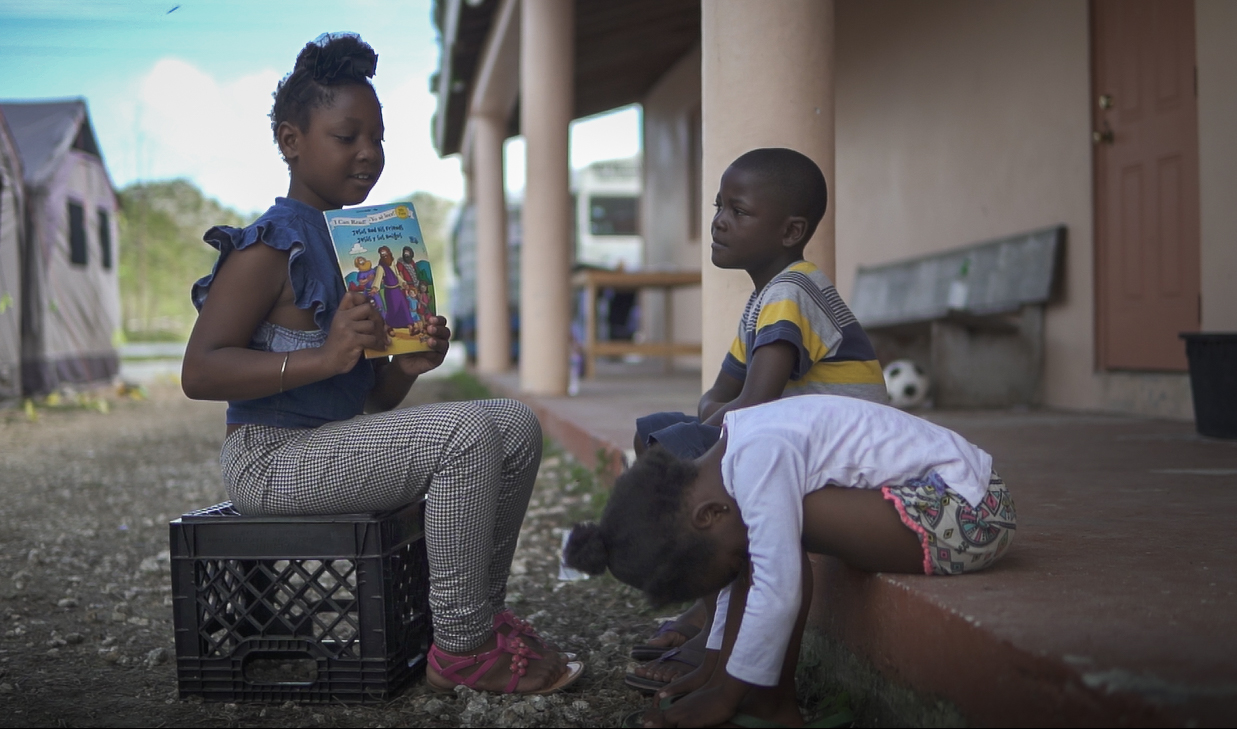 Keline pretends to be a teacher to kids living in a tent camp based out of New Haitian Mission Baptist Church in Marsh, Harbour, Abaco. The tents serve as a temporary housing solution following Hurricane Dorian ravaging the Bahamas in September. (Mackenzie Behm/Fresh Take Florida) 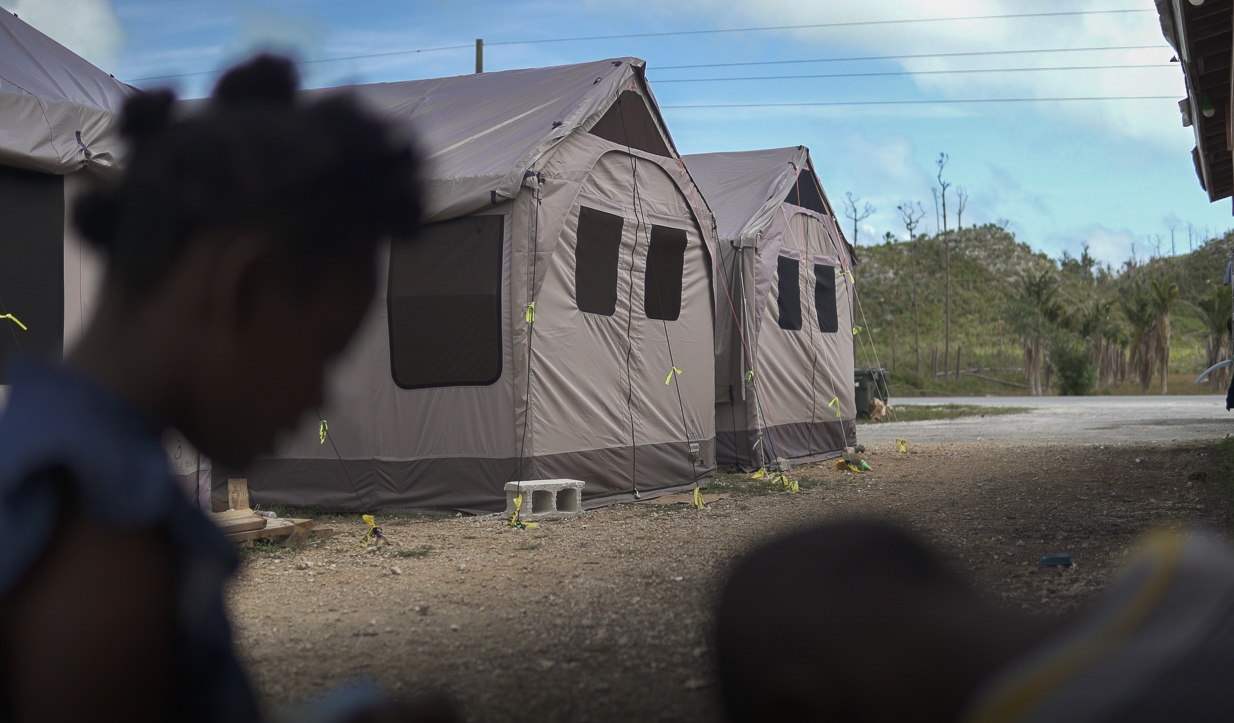 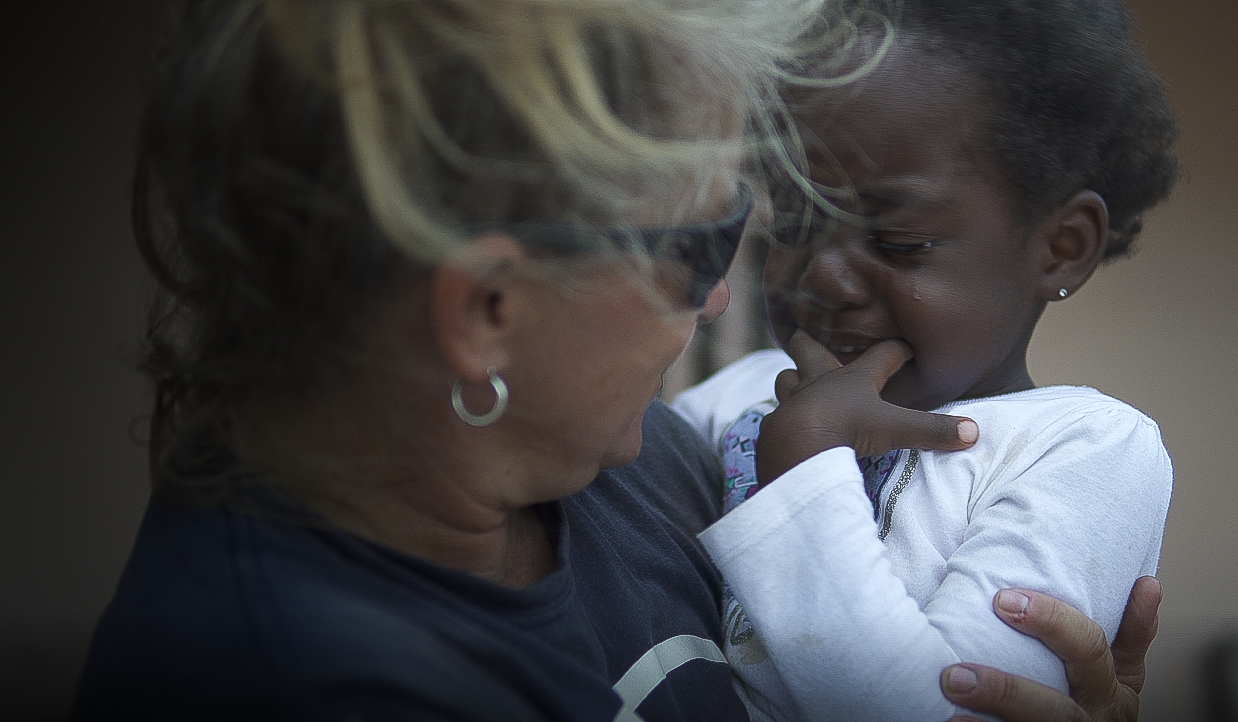 Jana Stone, a humanitarian at OpenWorld Relief in Marsh Harbour, delivers toys and backpacks to children at the New Haitian Mission Baptist Church. They lost their homes and are now living in tents after Hurricane Dorian ravaged the Bahamas in September. (Mackenzie Behm/Fresh Take Florida) 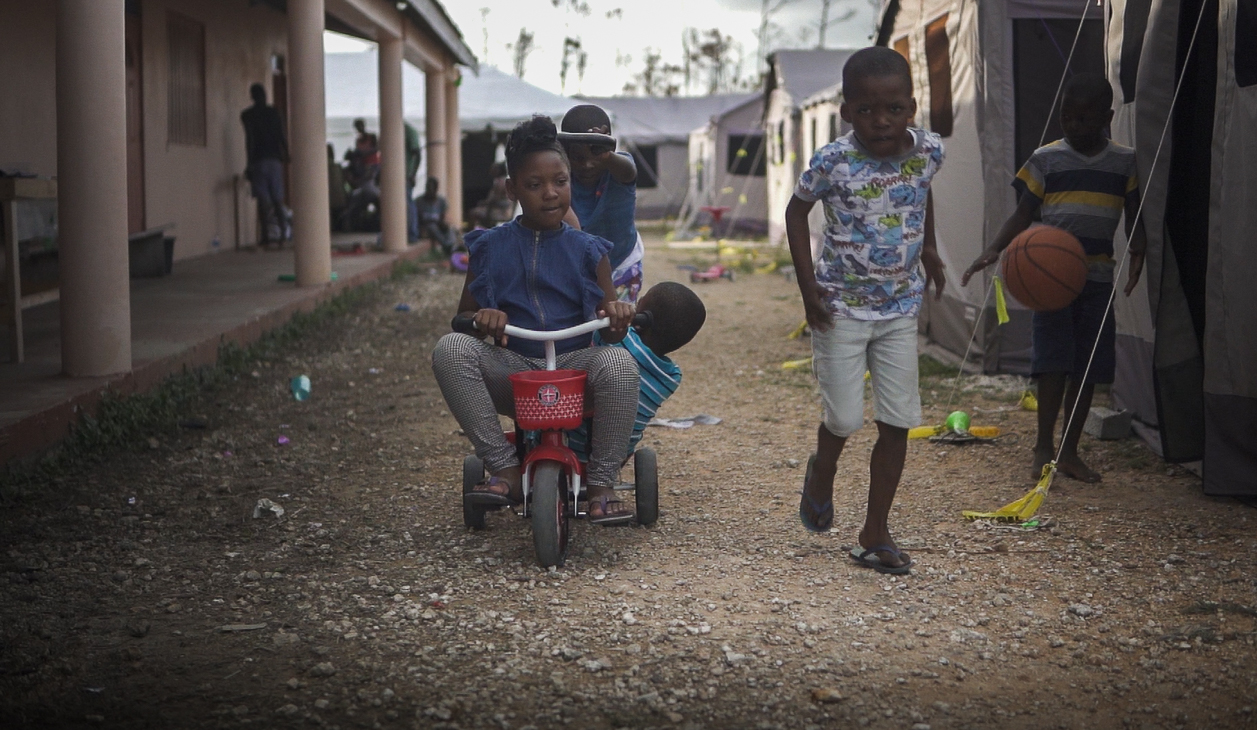 Children at the New Haitian Mission Baptist Church play outside in Marsh Harbour, Abaco. They aren’t able to go to school because most of the schools are destroyed on the island after Hurricane Dorian.(Mackenzie Behm/Fresh Take Florida) 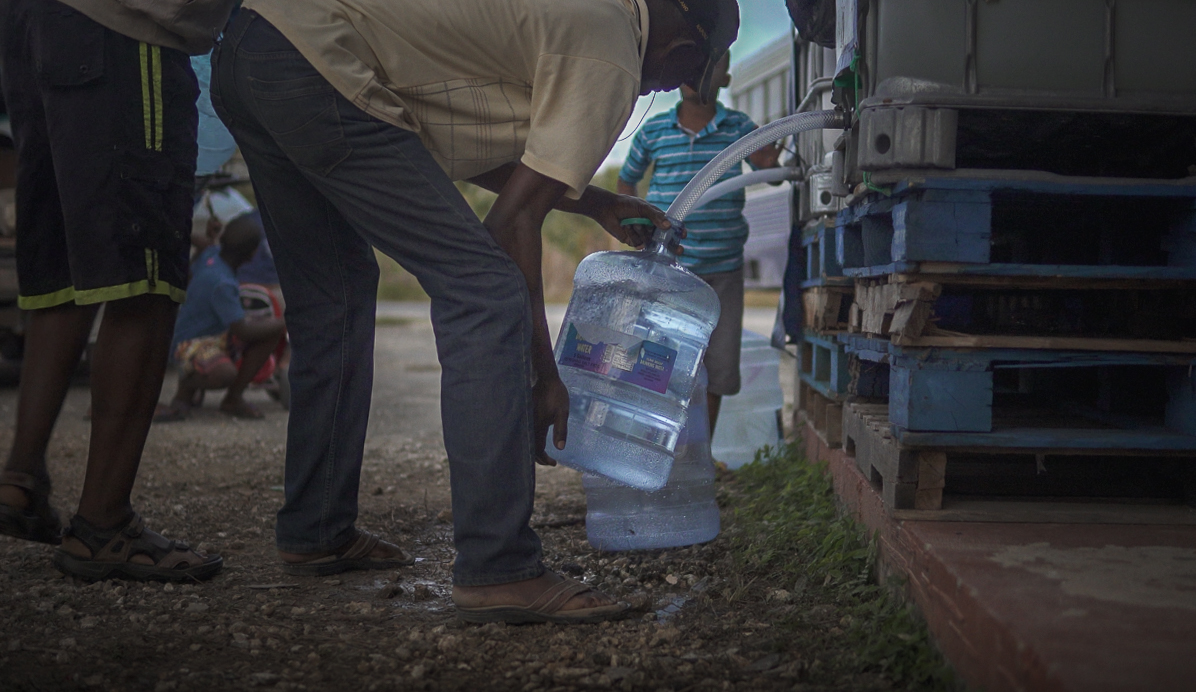 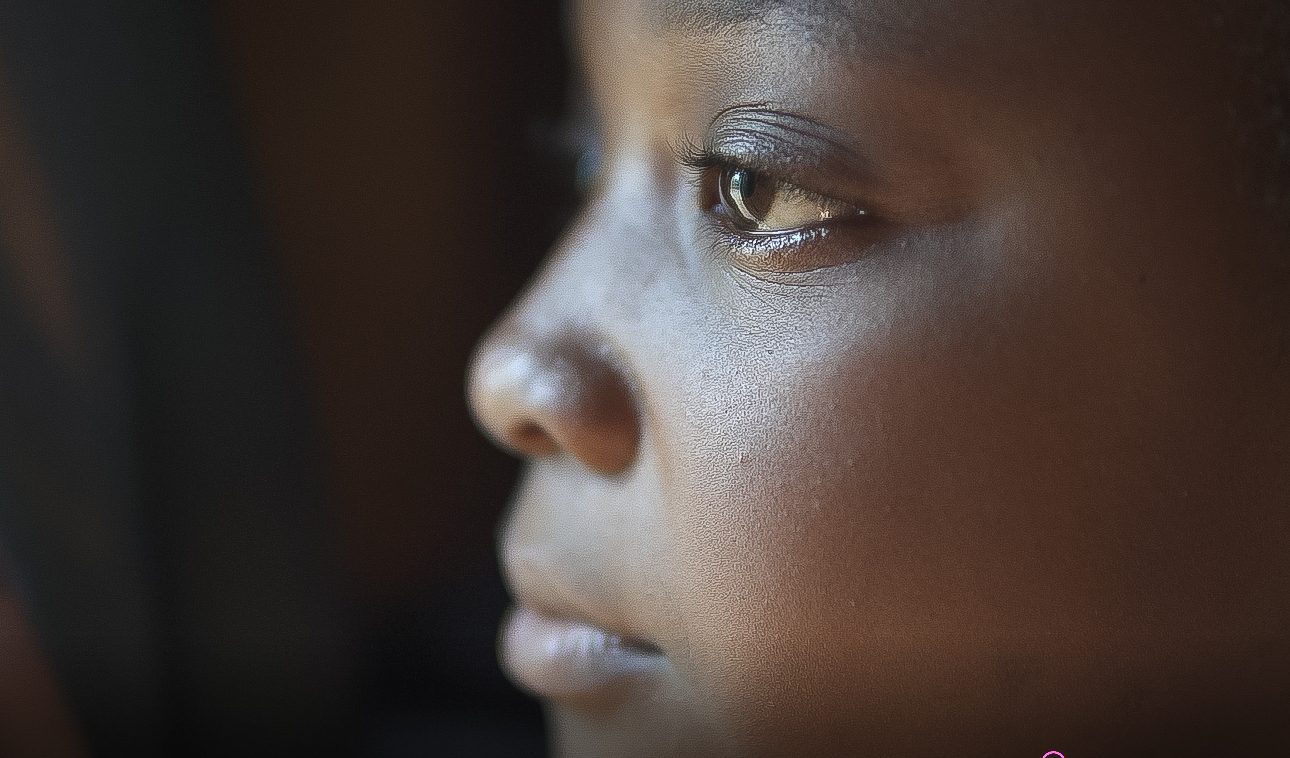 Keline, a Haitian immigrant in Marsh Harbour, Abaco, looks out her tent as she waits for the other children to join her to play games. Keline lost her home in an area called The Mudd and is living in a tent. (Mackenzie Behm/Fresh Take Florida)

Keline and the other children haven’t attended school since Sept. 1, when Hurricane Dorian wiped out all of the schools in Marsh Harbour. The only schools operating on the island are privately run.

Her family came over from Haiti for a better life, but they are poor and can’t afford private school. Keline’s dad, Lucner, is heartbroken that Keline cannot attend school. She’s a vivacious learner and reader. Some days, she begs him to go back. She wants to become a nurse and take care of her family. He knows how much potential she has and that’s what hurts him the most.

Lucner asked Fresh Take Florida to only use his first name out of fear of retribution. He worries his work visa will not be renewed and his family could be deported.

Weeks after the storm, The Ministry of Education ordered residents to come to Nassau to enroll in schools there and in Freeport. Those families who could, made the trip, but Lucner stayed in Marsh Harbour hoping that schools there would eventually open up. His work is in Marsh Harbour. He didn’t want to uproot his family. They waited for months, but no schools ever reopened.

Lucner eventually tried taking Keline to Nassau to enroll, but the ministry told him it was too late; she would have to wait until next year.

“I didn’t want to die. And I scared to die, because I don’t know where I going.”

But other times, missing school pulls her out of her shell to play teacher in the yard with the other kids. She drags a crate along the rocky, dirt path and plops in front of the children.

She lectures with authority. “Here, color this,” she demands. “It’s time to sing your ABCs,” she says, “You need to practice.”

“I don’t want to,” the other kids whine. They want to play. Keline knows most kids don’t think about their future, they’re focused on games. But she isn’t like the other kids — she thinks about it all the time. What will she become? How will she get there?

This Thursday, Sept. 5, 2019 photo provided by UNICEF shows damage caused by Hurricane Dorian in Marsh Harbour on Great Abaco Island of the Bahamas. (UNICEF/PA via AP) 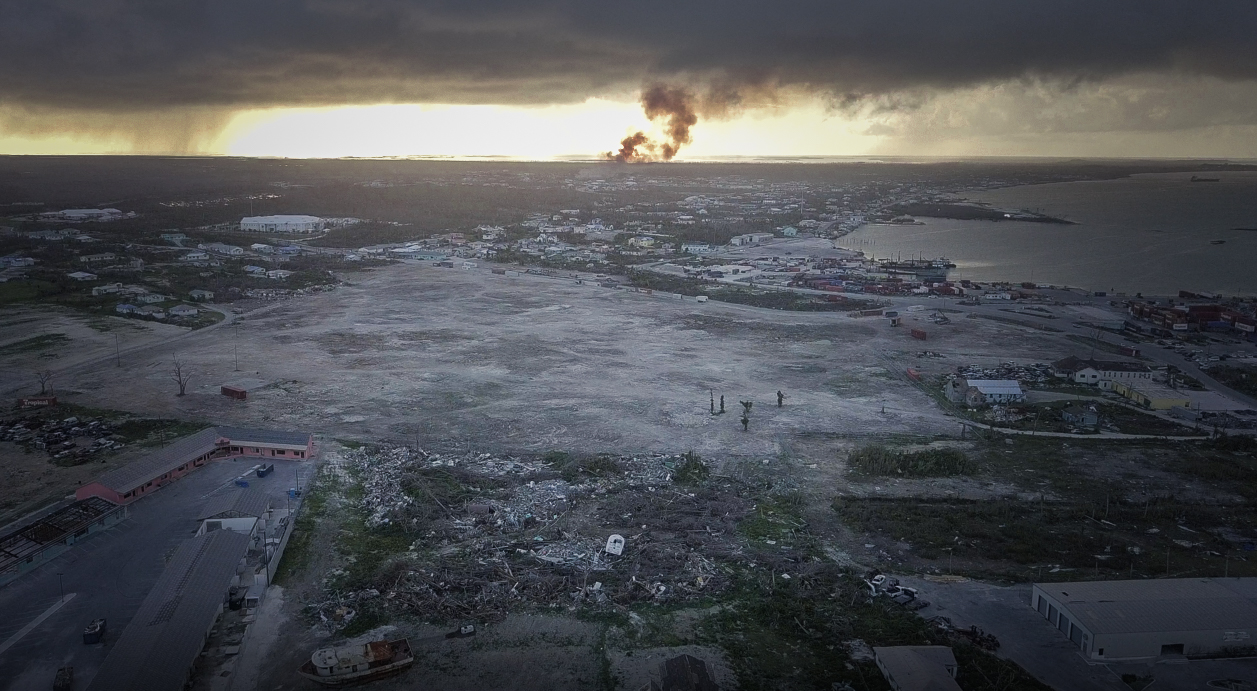 The Mudd, largely known for housing the Haitian immigrant population in Abaco, was one of the first areas cleared out after Hurricane Dorian hit the Bahamas in September. (Mackenzie Behm/Fresh Take Florida)

Lucner and Keline can’t return to their home in “The Mudd,” a former shantytown on the northeast side of Marsh Harbour, home to the poorest of the poor, many of them undocumented Haitian immigrants. The land was obtained from squatter’s rights that allowed the Haitians to first move in beginning in the 1970s. It was one of the first areas targeted by the government for cleanup.

The government scraped The Mudd clean of all remnants of life and fenced it off so no one could build on it.

Many Haitians immigrated to the Bahamas to escape the oppressive regime of President Jean-Claude Duvalier in Haiti and began pursuing agricultural jobs in the area. They moved mostly into shantytowns with poorly constructed homes and illegal electricity prone to fires. By 2018, Abaco’s shantytowns had grown to over 900 residences, according to a government report.

There was growing animosity and disdain toward Haitians living in The Mudd. Before the storm hit, the government of the Bahamas already had plans to relocate all shantytown residents, according to Lesley Johnson from the Bahamas Disaster Reconstruction Authority. Tensions were high. Many Haitians lived in fear of deportation.

Some Abaco residents say the government used the storm as an excuse to clear The Mudd and move out the immigrants. In their eyes, clearing The Mudd was prioritized over rebuilding schools and infrastructure.

Now, those who used to live in The Mudd have nowhere to live.

Marsh Harbour, Abacos, Bahamas, five months after Hurricane Dorian struck as a category 5 storm and devastated the tiny island, thousands of residents are missing and homeless without basic needs such as running water, electricity or shelter.(Mackenzie Behm/Fresh Take Florida)

Johnson said as long as the Haitians are coming in legally, they won’t face discrimination.

Lucner has legal status from a work permit, but he still lives in fear. The renewal is never guaranteed and they currently live in limbo — in a tent outside the church.

Peering out from the dark shade of her tent, Keline thinks of a longer life. A life as a nurse, caring for her family and others. She wants to see what her family is like years later and how they’re doing, where they might be living.

She dreams of college, but for now her school is in the dirt with her books, and she is the teacher.