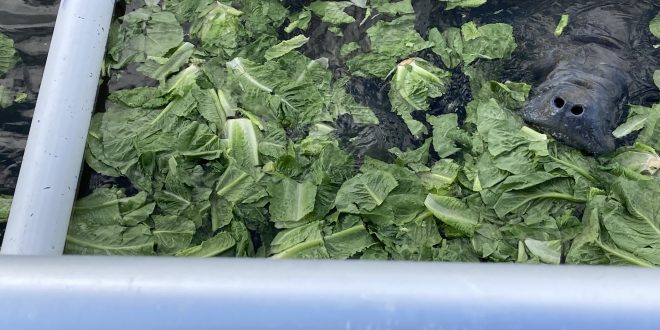 FWC biologists and partners with USFWS officially started the second year of the temporary feeding trial in Brevard County. (Photo courtesy of the Florida Fish and Wildlife Conservation Commission)

Now in its second year, the goal is to help undernourished manatee who cannot find enough seagrass in the IRL. Biologists first noticed an uptick in manatee deaths and the number of those in distress in December 2020.

“Supplemental feeding is not a permanent solution, it’s not a long-term solution,” she explained. “We had to make sure we were going into this with those guiding principles and bounds.”

The program served up a little more than 202,000 pounds of lettuce and cabbage during the initial three-month period last winter. The cost of the food was $116,895.95. Pasawicz said donations to the Fish & Wildlife Foundation of Florida‘s Marine Mammal Fund covered all but $200. This year, she said the estimated food need is 400,000 pounds.

“Since December 16th, when we started, we’ve provided over 66,000 pounds of lettuce to the manatees. We’ve given only romaine lettuce but anticipate incorporating both butterleaf and greenleaf and potentially cabbage,” Pasawicz said. “Compared to last year, we’re already significantly increasing the daily food amounts as well as what we anticipate to feed throughout the entire season.”

She said the number of manatees has ranged anywhere from 10 to 250 any given day in the feeding area. Surveys recorded 1,000 or more up the power station discharge area north of the feeding area.

“We’re closely monitoring these manatees at the site,” Pasawicz said. “We’re happy to report that all of the manatees appear to be accepting the lettuce that’s provided to them.”

Ron Mezich is FWC’s imperiled management species section leader. He says they have collected a lot of data since the “unusual mortality event” (UME) was first noticed in 2020. That includes information on the manatees, water quality, and the status of available seagrass.

“The health of the animals seems to be improved going into this winter,” he said. That is based on observations made in the field. “In December, when we caught and tagged nine manatees to follow through this winter, those animals all met our typical health criteria. That’s a great sign.”

But Mezich is cautiously optimistic. He called the situation very fluid and noted “one bad thing” can derail the progress.

“One large algae bloom, one multiple-week cold front could change the good news to taking a step backwards,” he warned.

FWC and its partners are working to restore seagrass, so manatee have more feeding options. A seagrass nursery network is now in place. It includes seven locations, mostly along the IRL, that will grow genetically diverse plants for replanting. A clam restoration project also aims at improving water quality for seagrass to flourish.

“We got reports in Mosquito Lagoon, north of the Indian River Lagoon, there has been some recovery of seagrass beds there this past spring and summer. And a number of animals took advantage of that,” Mezich said. “The clarity of water has been great in a number of areas in the IRL and Mosquito Lagoon for the last year and that’s important to seagrass growth. So that’s a little bit more good news.”

Wildlife officials will use data collected this winter and spring to guide them on planning decisions. Mezich says they review all the information over the summer and always keep an on eye on the manatee population before they decide what to do next winter.

Mike is a multimedia content producer for WUFT News and can be reached by calling 352-273-2274 or emailing mloizzo@ufl.edu.
Previous Farm Share and Project Youthbuild join together to give free food to families in need
Next Two more deadly pedestrian accidents occur in Alachua County