Editor’s note: This is the third of five articles this week that explore the consequences of unintended shootings in Florida. Click the links here to access the series intro, Part I, Part II, Part III and Part IV.

Nay’loni Fairley had been dancing since she could stand and taking ballet, jazz and hip hop lessons in Jacksonville since she was 3.

But at 4, she was nervous for her first recital with Shanequa’s Dazzling Dolls.

“Hey, you’re gonna do just fine,” James Fairley told her, surprised by her uncharacteristic lack of confidence. “Don’t worry about it. It’s in you. You have the passion for it. Go out and show ’em.”

From the stage, Nay’loni found her father in the crowd. He smiled and held up an “OK” with his fingers. The music began. He beamed. 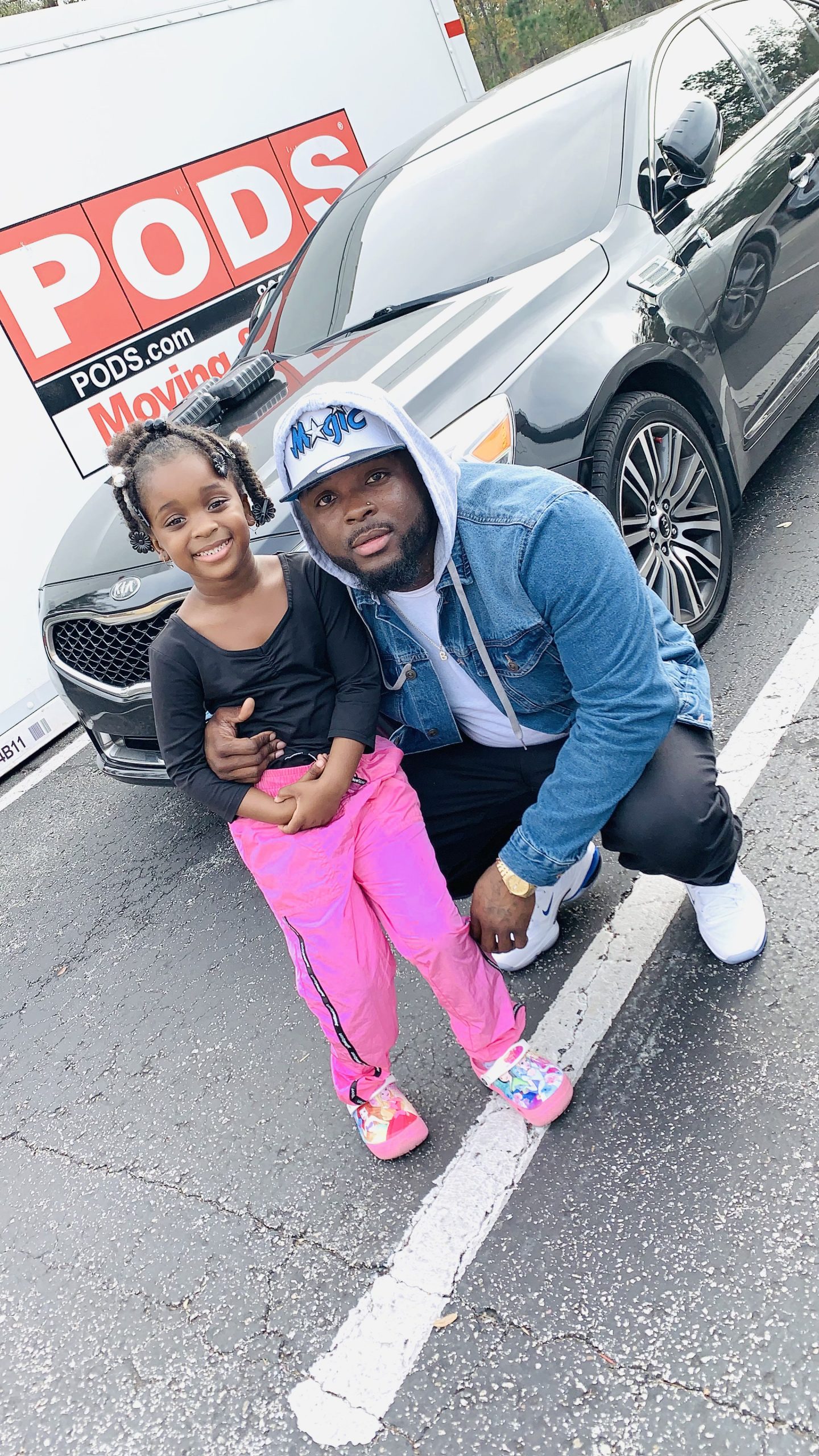 Nay’loni smiles beside her father. James always wanted to be a dad, and Nay’loni fulfilled that dream. (Photo courtesy of James Fairley)

Among her trophies on a shelf in his house, Fairley, 32, cherishes one in particular: “Best Dancer.” He, like his daughter, dreamt of having a life of a dancer.

The seasoned dancer was hesitant, at first, when he and his daughter were asked to perform at a family anniversary party. It would be their first public performance together.

“Hey, we got to do this the right way,” he told her before they began to choreograph their dance. “Daddy’s gonna be hard on you, because this is what I do, and I know this is what you like. You down with it?”

“Yeah,” she said, with no trepidation in her voice.

For a week, they practiced. Once they finished, James asked his daughter to show him what she had learned. She delivered. With flawless execution, she hit every step. At the gathering, they did their number with him wearing a black sweatsuit, white gloves and a mask, and her in a pink and gold gown. No one in the room could look away.

Why we reported this series: Unintentional shootings affect hundreds of U.S. children each year. From foolish teenage games to curious children finding a guardian’s guns, nearly one child per day is injured or killed in such a case. The ripples from these incidents have been felt from Gainesville to Tampa to Jacksonville. Florida’s safe storage laws, if strengthened, could prevent these tragedies, experts say. But where state and federal legislation may stall, county school districts and Florida activists across the spectrum of gun ideology are promoting the safe storage of firearms in hopes of better protecting families.

How we reported this series: To dig deeper into the lives of the children lost in Florida, WUFT News interviewed family members and friends affected most deeply. In addition to speaking with experts working at nonprofits and other organizations focusing on the matter at large, we also reviewed many public records and previous news stories about the cases specifically as well as unintended shootings across Florida and the country in general.

Fairley assumed they would perform together again and again, that a tradition had begun.

But that was their first and only dance. Around four months later, Nay’loni unintentionally shot and killed herself with her mother’s gun. James hasn’t danced since.

Fairley melted when his daughter entered the world. He ran out of the hospital room where his daughter and her mother lay to find his parents. “It’s a girl!” he shouted with joy.

As a toddler, she didn’t play with her toys; she pounded on them like a drum and danced to the beat. Whenever she heard music – no matter the genre – the rhythm took over. All day and night.

Fairley first noticed his daughter’s star potential in an unexpected place: Kenan and Kel’s 1997 film, “Good Burger.” She could recite the movie from start to finish, he said.

“Dada, can we watch ‘Good Burger’?” she’d ask as he flipped through TV channels.

“Nay’loni, we’ve seen this so many times,” he’d say. But he always gave in. He loved watching her act out the scenes as if she was right beside the pin-striped Nickelodeon stars. 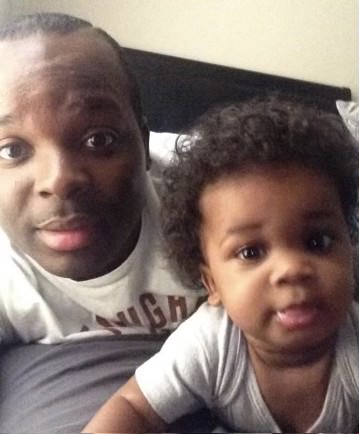 Nay’loni Fairley’s father was awestruck by his only child’s beauty: “Just looking at her, I knew that she was going to be special.” (Photo courtesy of James Fairley)

Man, she’s going to be something when she grows up. I just pray that I’m here to see it.

By summer 2019, Nay’loni got past her nervousness and was always at the front of the Dazzling Dolls. Around 5, she started to win awards.

She was a happy first grader. James loved to watch her make her friends and cousins laugh with her knowledge of music and film.

He recalls how a smile nearly always spread across her face, except for one day in October 2021. Instead of chattering in the back seat of his car on the way to school, Nay’loni was silent, staring at her dangling feet.

“Mm-hmm,” she replied. But the look on her face was bizarre.

That was the last time he saw his daughter.

Fairley was leaving his apartment, ready for a day of work at a landscaping company, when his phone rang. It was Nay’loni’s mother. Their daughter, who went back and forth between her parents’ houses, had stayed with her mother the night before.

His child’s mother was crying.

“Nay is gone,” Fairley said before she said a word. He just knew. She told him that Nay’loni had found her gun. He hung up the phone.

He drove to the hospital and sat in the back of the waiting room. When the doctors came out, he said, he already knew his daughter was dead.

“I’ve never been the same since,” Fairley said.

Dazzling Dolls coach Shanequa Minnis danced to Andra Day’s “Rise Up” in front of the casket. Later, a horse-drawn carriage carried it to a cemetery as mourners blew bubbles toward Nay’loni.

It was Fairley’s darkest day: “Even if the light was shining on me, I wasn’t able to see it because I was so hurt. I was torn. I was broken.”

A Florida Department of Children and Families report said the shooting was self-inflicted, and no criminal charges were filed against Nay’loni’s mother. The mother did not respond to WUFT News’ efforts to contact her, and her name has never been published in connection with the case.

Fairley has only visited Nayloni’s grave a few times, on Christmas and her birthday. Going there closes him off from the world. He wants to live the way she lived: enthusiastic, outgoing and adventurous. On the hardest days, he reaches out, as if on Facetime, just like they used to.

“Nay, Daddy needs you today,” Fairley tells her. Then, he sings one of her favorite songs to her.

“I got this feeling, inside my bones …” he starts, recalling how she loved singing “Can’t Stop the Feeling!” whenever they watched the movie “Trolls” together.

Other times, Fairley opts for “Hot Dog” from Mickey Mouse Clubhouse, or Post Malone’s “Sunflower,” from another of her favorite movies, “Into the Spiderverse.”

Nay’loni always seems to respond when he needs her. In the car or in restaurants with his wife, who never got to meet Nay’loni, those songs always seem to find him.

“You’re planning a trick on me,” he’ll say to the space around him. “You really had to do this?”

Fairley looks into those wide, brown eyes and matches her ear-to-ear, scrunched-nose smile. People might think he’s crazy, he said. But that’s OK.

Along with her best dancer trophy, he keeps her hair bonnets, her scrunchies and her JoJo Siwa backpack as tangible pieces of her memory.

Fairley wants people to talk about Nay’loni – about her passions, her spirit, the way she died. He hopes other families will prioritize safe gun storage and talk with their children about gun safety.

“I just hope it gets better, because we’re all suffering, and it doesn’t get better,” he said. “As the days go by, it gets worse as a parent ­– knowing that your child lost their life over a gun.” 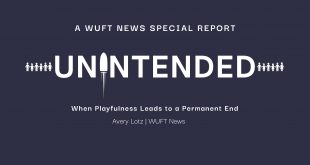 Editor’s note: This is the first of five articles this week that explore the consequences …