ORLANDO, Fla. — The holiday travel season this year is expected to rival the busiest seasons before the pandemic at Florida’s two most bustling airports, which will see millions of travelers passing through them, officials said.

Orlando International Airport, the state’s busiest airport and the seventh busiest airport in the U.S. last year, is expected to host 2.9 million passengers during a period that started in mid-December and extends through the first few days of the new year. That would mark a 17% increase over the same period last year when 2.5 million travelers passed through the airport.

Miami International Airport is expected to host 2.5 million passengers for a holiday travel period that lasts from Dec. 21 through Jan. 6, which is Three Kings’ Day, the final Christmas celebration observed by many Christians in Latin America and Spain. That would mark a 1.5% increase over the record-breaking holiday travel season last year.

The busiest travel day at the Orlando airport is expected to be the day after New Year’s Day, with an estimated 162,000 travelers arriving at and departing the airport.

The Associated Press is a wire service to which WUFT News subscribes.
Previous ‘The red suit picks you’: Santa Clauses prepare for the renewed holiday crush
Next After Hurricane Ian, sowing hope 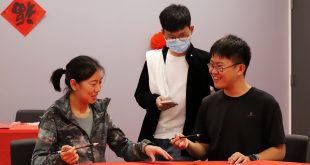