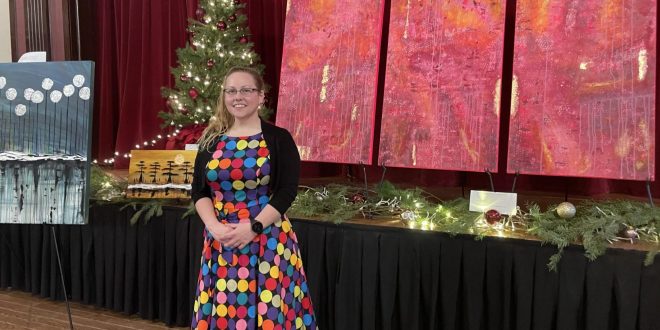 Amanda Hammond poses with her abstract piece she calls "Perfume of Love.“ She described the piece's basis as "the feeling of intoxication and the fiery feeling you get when experiencing first love.” (Olivia Clark/WUFT News)

ALACHUA, Fla. – This north central Florida city of about 11,000 stepped up earlier this week to make its debut in the art world.

Hosted on Sunday in the Alachua Woman’s Club on Main Street, residents were treated to a combination of holiday decorations and art at the city’s first such event. It was all made possible by the passion and financial resources of three local talents: Christopher Dobbs, Amanda Hammond and Alpatrick McCleary.

“This is what it felt like when I was 7 years old waiting on Christmas day to roll up,” said Dobbs, just before last weekend’s show. “It’s awesome and it’s driving me nuts. I’m ready to do it.”

The woman’s club was filled with colorful Christmas decorations and bright lights surrounding the pieces of art. Jazz music and classic Christmas carols played softly in the background.

The show featured multiple mediums and styles of art from Hammond, McCleary and Dobbs. The artwork ranged from impressionistic paintings to digital art.

“The art show was a wonderful example of how diverse even small communities can be,” said show attendee, Kellie Dunlap, 55. “Watching folks from all different backgrounds and beliefs come together to delight in the common pleasure of art was refreshing.”

The exhibit was solely funded by the artists. Each spent about $1,500 which included renting the Women’s Center. They also used their own money to purchase food, drinks and decorations.

The art show was open to everyone at no cost. Attendees enjoyed the art while snacking on appetizers and sipping on wine that was provided by the artists.

“We really just wanted everyone to enjoy some art and have a good time,” Dobbs said.

McCleary, 43, said he is hopeful that next year the show will have a sponsor or two.

In addition, to being an artist, McCleary is a Newberry native who is a father of five and an engineering technician with Gainesville Regional Utilities.

McCleary discovered his passion for art in elementary school by tracing comic book characters. He said his main inspiration was superheroes.

When McCleary first started creating art he primarily used colored pencils. In 2015, the self-taught artist began experimenting with paints. Now, his art includes work made with watercolor paint and other projects where McCleary uses digital art created on his iPad.

In August, he was named ambassador for the arts for the City of Newberry.

Like McCleary, Hammond is also passionate about art. Hammond, 35, has been painting for 15 years and said her art is her way of communicating.

“As someone with Asperger’s, I’m not necessarily able to express my feeling or even interpret why I’m feeling a certain way,” Hammond said. “When I can put something on canvas in physical form, it allows me to process good days and bad days like a normal person would.”

By day, Hammond is the senior international sales and marketing executive for a scuba diving brand, Light Monkey.

She hopes that one day she can become a full-time artist. For the time being, she is pursuing painting as a side gig and hobby.

Dobbs, 47, has been painting hot rod trucks since high school but has recently picked up canvas painting.

“My wife actually went to Walmart and bought a $10 acrylic kit,” Dobbs said. “That’s what I did my first canvas paint job with and ever since then, it’s what I’ve been doing in my spare time.”

“I grew up in the woods, so landscape painting is kind of my happy place,” he said.

Olivia is a reporter for WUFT News who can be reached by calling 352-392-6397 or emailing news@wuft.org.
Previous Gainesville organizations help homeless people with free hair cuts and food
Next NASA’s Orion capsule splashes down, concluding Artemis I mission