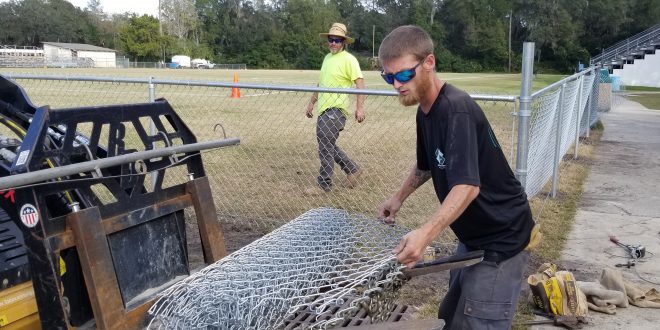 A worker prepares the materials for the new fencing being installed in the end zones at the Hawthorne High School football stadium. The new fencing will keep fans at a safe distance from the players on field. (Ben Acker/WUFT News)

The state semifinal playoff game between the Hawthorne Hornets and Blountstown Tigers will remain in Hawthorne on Friday, Dec. 2, despite complaints from the Pahokee Blue Devils about crowd control and inadequate security.

Former Hawthorne Mayor Matt Surrency hoped the Florida High School Athletic Association (FHSAA) would see the complaints “as being from a disgruntled team that isn’t playing this week” and decide against moving the game from Hawthorne to Citizens Field in Gainesville.

However, Pahokee High School Athletic Director Lashonda Kelly said that losing the game had nothing to do with the complaints filed by the school to the FHSAA.

One of the main concerns voiced by Kelly and head coach Emmanuel Hendrix was how close fans were able to get to the players in the end zone.

“Fans are close enough to punch a kid if they want to,” Hendrix said.

The close proximity of fans to the players along with a small security presence led to spectators getting involved in a postgame fight between the two teams.

Both schools had their own opinion on how and why the fight started, but Kelly said that spectator involvement made the situation all the more hostile.

“Because their fans had access to the field so easily, they came onto the field even after the players and coaches were on the field,” Kelly said. “They came in behind them, which caused my fans to literally jump the gate to come on because they felt like their kids were in danger.”

As a result, Alachua County Public Schools hired a fencing contractor to install fencing around the end zones at Hawthorne’s field to keep spectators at a safe distance from the players.

Another huge security concern for Kelly and Hendrix was the possible presence of firearms at the game. Several Pahokee players told Kelly they were shown guns, and Hendrix said he and a parent of one the players spotted men with rifles near the end zone at the conclusion of the game.

“There were definitely guns,” Hendrix said. “I saw more than one gun, so they can say what they want to say.”

However, Surrency pushed back against those claims and said Pahokee was “making stuff up to put Hawthorne in a bad light.” Surrency, who does the public address announcing at Hawthorne football games, noted that the Pahokee football team stayed for over an hour after the conclusion of the game, which he believes would not have happened if they felt threatened at any point.

After word got out about the complaints filed by Pahokee and the FHSAA potentially moving the Hornets’ next game to Citizens Field, the community rallied in hopes that the game could still be played in Hawthorne.

With the Alachua County School Board and Superintendent Shane Andrew also advocating on behalf of Hawthorne High School, the FHSAA agreed to keep the game in Hawthorne with additional safety protocols in place. This includes the use of metal detector wands to prevent fans from bringing weapons and noisemakers into the stadium.

“Anybody that’s been to Hawthorne or knows Hawthorne won’t have any worries about it,” Surrency said. “Hawthorne is an amazing community, and unfortunately, we get a bad wrap with stuff like this that is nothing of our doing but our success.”

Although the postgame fight and “blatantly false” claims made by Pahokee were upsetting to Surrency and others in the Hawthorne community, he said that if it wasn’t for the athletic program, the need for new and improved facilities may never have been brought into focus.

“The silver lining of all of this is it really shows what is needed for our community,” Surrency said. “We do need improvements for all our facilities and not just our athletic facilities.”

Kickoff for Friday’s game between Hawthorne and Blountstown is set for 7:30 p.m., and the winner will advance to the Class 1R state championship game, which will take place at Gene Cox Stadium in Tallahassee on Saturday, Dec. 10 at 7 p.m.

Correction appended: A previous version of this story misattributed a statement from Matt Surrency to Hawthorne’s principal, Ginger Stanford. WUFT regrets the error.

Ben is a reporter for WUFT News who can be reached by calling 352-392-6397 or emailing news@wuft.org.
Previous Solar-powered trash cans are coming to Gainesville city streets
Next The Point, Dec. 2, 2022: Gators quarterback released on $80,000 bond