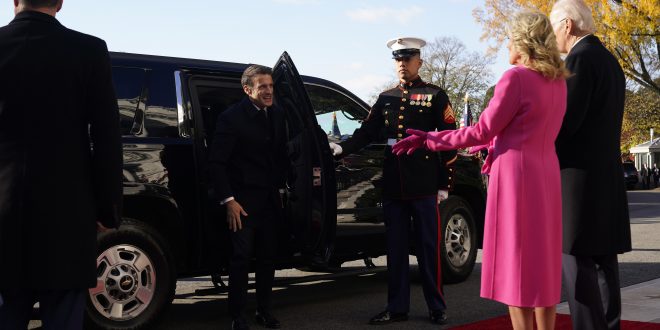 President Biden will host a joint press conference with Emmanuel Macron on Thursday as a part of the French president’s three-day state visit.

Traditionally leaders have answered two questions each at joint press conferences; topics that could come up include trade issues — especially as they relate to electric car provisions in the infrastructure legislation — as well as China; Russia’s war with Ukraine; and lingering concerns about AUKUS, a new defense partnership with the U.K., U.S. and Australia. That partnership was forged after a U.S-Australia arms deal that infuriated France.

National Security Council spokesman John Kirby said earlier this week that France is not only the United State’s oldest ally, but a key partner on a number critical international issues including the war in Ukraine and tensions with China in the Indo Pacific region.

Later on Thursday, the pair of world leaders will take part in the first state dinner hosted by Biden, which includes a performance by Jon Batiste.

National Public Radio is based in Washington D.C.
Previous The Tracks K-9 Club makes a splash with its third dog competition
Next UF Environmental and Horticulture Club is holding its poinsettia sale Dec. 8 and 9