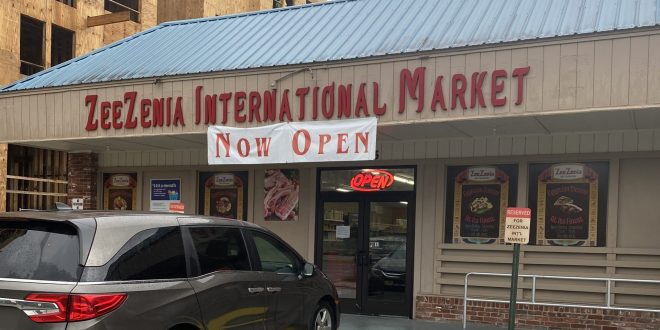 For Raef Slim, the worst part is the rain. Slim moved to Gainesville from Lebanon last year and still takes issue with the new climate.

“It’s so hot, and then suddenly it rains,” he said. “What happened?”

But on a sunny day in November, Slim spends most of the day inside at Zeezenia International Market. He’s a cashier, and on that day he was the only man working the store, which attracts customers looking for Halal meats and other Middle Eastern goods.

Slim wasn’t always the man standing behind the counter. He moved to Gainesville to be with his wife, a PhD student at the University of Florida. The market was a welcoming sight for him as one of the only Halal providers in Gainesville.

“I usually buy meats and spices,” Slim said. “It’s the only place to buy Middle Eastern food in Gainesville.”

Slim was a customer at Zeezenia until a fire devastated the store last June. He went home to Lebanon that summer and returned to Zeezenia in a different capacity. He asked the owners, Fawzy and Zaineb Ebrahim, if he could work at the market, and they said yes. His first job was to help rebuild the damaged store.

“I built back all of the shelves after the fire,” Slim said.

While Slim is working, a customer arrives to pick up a Thanksgiving turkey for a friend who is visiting from New York. A mother with two children also does some last-minute shopping before the holiday.

During times when he isn’t assisting customers, Slim peruses the aisles and points out certain foods and spices he prefers. Most of them are Lebanese products.

Slim points out Mount Lebanon, where he grew up, on Google Maps. His family now has roots in Gainesville, as his newborn daughter is the first natural-born US citizen in the family. Slim says that getting accustomed to Gainesville took time, but now he feels more at home.

Mount Lebanon is 772 miles from Luxor, Egypt, where the Ebrahims both lived before moving to the U.S. in 2000.

The two first lived in Georgia but moved to South Florida after Fawzy got a job there. Things changed when he got sick. The family decided to turn to the UF Health Shands Hospital, and it precipitated their eventual move to Gainesville.

“We both ended up liking Gainesville because it’s a combination of both places we love,” Zaineb said.

She is referring to Athens, Georgia, which the couple liked as a college town, and South Florida, which Zaineb said is beautiful and modern.

The couple soon ran into one problem with Gainesville: they couldn’t find any Middle Eastern markets that could provide groceries and meals. They decided to buy land for a garden, where they could grow plants and raise animals in a natural and Halal environment.

The Halal process needs to be certified through the US Department of Agriculture, and there are other restraints on farming as well. For instance, the Ebrahims noticed that the water sources in Gainesville were a bit different than the Nile. The vegetables they grew were not like those back home.

“We even brought seeds from Egypt, which got us in trouble with airport security,” Zaineb said. “It still didn’t taste the same.”

Whatever the limitations may be, the Ebrahims have constantly adapted to the environment in order to retain the authenticity of their market while also expanding their business. During the months the fire closed the store, Zaineb learned more about how American supermarkets work.

“Throughout the summer I did my shopping at places like Walmart and Publix,” she said. “Before that, I would just do it at the market.”

She noticed how these supermarkets arranged the shelves and took this observation back to Zeezenia. The new organizational style makes it easier for her to know when certain goods are out of stock and where they are located in the store.

Zaineb orders the stock from wholesalers across the country. These wholesalers get products from countries like Syria, Egypt, Lebanon and other places in the Middle East.

“Before this business, I was just getting my education and allowance from my parents,” she said. “I never knew how to be an entrepreneur until I was put on the spot.”

Some might think Zeezenia is a cultural blend of completely different flavors, but Zaineb doesn’t see it that way. While there are flavors from every corner of the Middle East, she finds that the countries represented all use variations of the same items.

“Mac and cheese here in Florida is almost the exact thing as in Wisconsin,” she said. “The states are like little countries inside one big country, and it’s the same in the Middle East.”

She uses falafel, the traditional staple from the Levant, as an example. In a place like Jordan or Israel, the falafel would essentially be the same. In a country like Egypt, there are slight variations, like using fava beans as opposed to chickpeas.

“At the end of the day, we all call it the same thing,” she said.

Levi is a reporter for WUFT News who can be reached by calling 352-392-6397 or emailing news@wuft.org.
Previous Marion County deputies are searching for two missing children
Next The Point, Nov. 30, 2022: Voters unclear on Gainesville’s Complete Streets program