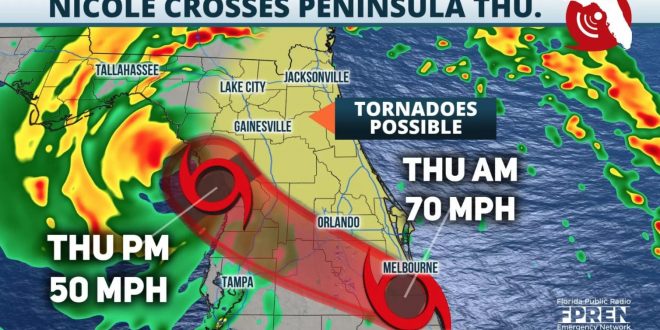 Nicole will continue moving northwest throughout the day Thursday and could pose a tornado risk across northeast Florida. (Florida Storms/Meteorologist Justin Ballard)

Hurricane Nicole made landfall Thursday at approximately 3 a.m. near Vero Beach and will continue to bring rain, wind, and an isolated tornado risk to the central and northern half of the state through Thursday.

Hurricane warnings remain in place from Daytona Beach to Boca Raton. This region of the state is most likely to experience sustained hurricane-force winds. Tropical storm warnings start in the Panhandle near Tallahassee and extend across nearly the entire Peninsula, excluding only Miami-Dade, Collier, and Monroe Counties. Storm surge stretch along much of the east coast of Florida, including the St. Johns River north of Georgetown. On the Gulf side of the Peninsula, storm surge warnings are in effect from the Big Bend through the Nature Coast. Flood watches remain in effect for many areas of central and east Florida, where rain from Ian in late September still has rivers well above average.

Damage from Hurricane Nicole is already present, especially along the east coast of Florida. This area has been subjugated to onshore flow for several days, leading to many reports of coastal erosion, damage to structures along the coast, and inundation along busy coastal roads. Nicole will gradually weaken through Thursday, but the wind field associated with Nicole remains quite large. This will result in tropical-storm-force winds across much of the state Thursday, as well as continued storm surge along both the east coast and Nature Coast along the Gulf of Mexico.

Nicole is forecast to move across the Peninsula in a generally northwest direction. The center of Nicole is forecast to nearly parallel the Nature Coast through Thursday evening before moving into the Panhandle. A second landfall along Florida’s Panhandle cannot entirely be ruled out, though it is not forecast to be a hurricane by this point. Once Nicole enters the Panhandle, it will quickly get pulled toward an approaching trough.

A tornado risk remains in place across North Florida and Central Florida through Thursday as Nicole pushes through the Peninsula.

A Tornado Watch may be issued for this region of the state, as landfalling tropical systems are well-known for producing quick spin-up tornadoes. While tropical tornadoes tend to be weaker, they can develop with little to no advanced notice. Residents are encouraged to have multiple ways to receive weather alerts and to act quickly if a tornado warning is issued for their location.

Rainfall totals across the northern and central portion of the Peninsula could be as high as 4 inches, with a few locally higher amounts possible. Flash flooding could occur, especially in areas still recovering from Ian’s deluge six weeks ago. Residents are encouraged to minimize travel. If travel cannot be avoided, residents are reminded not to drive through flooded roadways.

Weather conditions will be slow to improve, but should do so from southeast to northwest through Thursday night. Nicole will quickly get picked up by an incoming cold front, which should minimize how long the system lingers in the state.