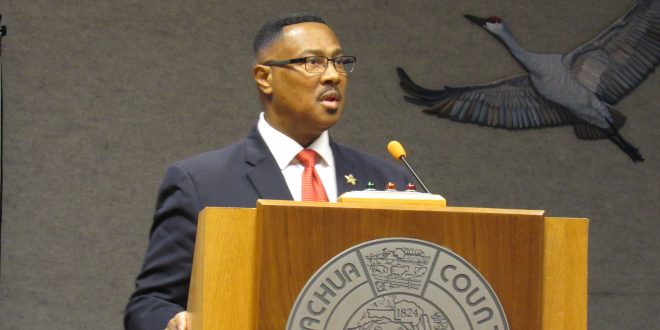 This was made in response to Sheriff Clovis Watson Jr.’s request for budget appropriations, which would be used to support his employees in the inflation-impacted economy.

Despite the unanimous vote, there was initial resistance to his request due to a lack of resources and concerns about the department’s previously awarded money.

Watson recently came under public scrutiny following the release of an article by The Gainesville Sun. The article addressed how $4.8 million was given to all departments by the Alachua County Commission, which would be sufficient enough to provide a 7% wage increase to all employees and reduce the impact of inflation.

When Watson gave an increase of less than half the amount, both county officials and the public were concerned about where the rest of the money went. This confusion turned to frustration when ACSO requested appropriations to the fiscal year 2023 budget in the county commission meeting held Tuesday.

Capt. Kaley Behl, public information officer at ACSO, said prior to the meeting that the reason for the request was to support its deputies in the challenging economy. She also said that the department is understaffed due to the lack of competitive wages, resulting in a greater workload.

At the start of the meeting, when county commissioners opened the floor to public comments and questions, citizens were quick to voice their concerns.

Pamela Paris and Sheila Payne of the Alachua County Labor Coalition spoke out about the issue of living wages and their discontent with what they read in the article about the situation.

“We think Sheriff Watson should take the money offered by the county commission and spend it in the way that it was intended, to ensure every employee in the county makes a living wage,” Paris said.

In response, Watson shot down those comments, saying that they were “untrue.” He made clear that every employee at ACSO would receive the full 7% awarded by the county regardless of date of hire or seniority.

Watson gave employees 2.5% raises with the money given at the start of the year, and he said that he could not give the other 4.5% until his union agrees to take the additional fund, which he is confident they will.

“There was some alluding as to where did the money go,” he said. “The money’s in the bank.”

Additionally, Watson said he was waiting until after the commission meeting to give the raises in the hopes that the county leaders would approve his request for additional funding for FY23.

When the request was brought up later in the meeting, there was resistance. Commissioner Anna Prizzia initially rejected it due to lack of transparency by ACSO and an unwillingness to cost taxpayers more money. It was also recommended by staff to not grant the request due to the 7% already given.

The tides changed when several members of ASCO, both sworn and non-sworn, gave statements explaining why the department needed the money. Many detailed the work that they and their employees do on a day-to-day basis, their numbers overwhelmingly surpassing those of neighboring counties.

Lance Yaeger, chief detective of the Criminal Investigations Division, shared a snapshot of the number of calls that the sheriff’s office received between August 2021 and 2022. For armed disturbances, ACSO responded to 120 while other counties responded to six. For armed robberies, 23 versus four. For shots fired, 385 versus 67. For domestic disputes and disturbances, 1,304 versus 76.

“If our neighbors have 9% of our call load or call volume with arguable 17% of the risk, where would you work if you were 21 or 22?” Yaeger asked.

Hanna is a reporter for WUFT News who can be reached by calling 352-392-6397 or emailing news@wuft.org.
Previous Nicole forecast to make Florida landfall as a hurricane Wednesday night
Next Hotels may need to be booked further in advance for UF graduation