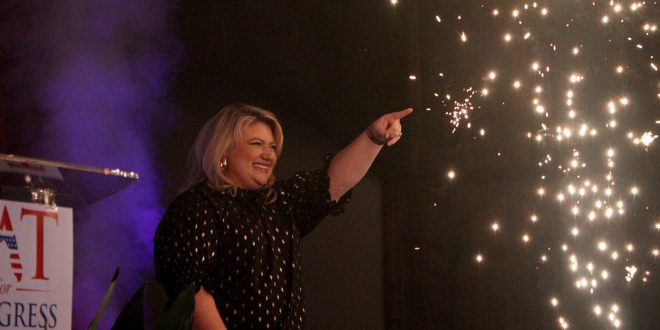 As the watch party turned into a victory party over the course of the night, the energy from the assembled Cammack faithful reached a fever pitch.

After traveling several minutes down an unilluminated, winding dirt road through the middle of a forest, attendees arrived at Newberry’s Granville Plantation to witness Cammack’s victory. Country rock could be heard inside and outside the building.

When Cammack first spoke to the crowd at 8:15 p.m., she danced to Queen’s “Another One Bites the Dust” while the uproarious crowd cheered on. Cammack admitted she intentionally chose the remote location so that all assembled could be “unashamedly Americans.”

After saying she was proud to be the 3rd District’s congresswoman for another term, she happily announced that she wouldn’t be Nancy Pelosi’s least favorite member of the House of Representatives because she and the rest of the Republican caucus hope to fire Nancy Pelosi as Speaker of the House of Representatives. (As Tuesday night came to a close, control of both the U.S. House and Senate remained too close to call.)

Cammack called her husband, firefighter Matt Harrison, up to the stage for a kiss, before proceeding to thank her staff for their efforts. Cammack then left the stage while showered in pyrotechnic sparks to Guns n’ Roses’ “Welcome to the Jungle.”

Cammack, who already served as the ranking member of a House subcommittee despite only being in her first term, said she is looking at new leadership opportunities in the new Congress. Cammack said she particularly has eyes on the Energy and Commerce Committee, where Cammack says she plans to challenge Big Tech.

Cammack said she would like to see balance restored for tenured professors on campuses.

She said her top priority is creating jobs and getting the economy back on track, citing high gas prices and other economic woes resulting from the widespread inflation gripping the nation, in order to help the nation as a whole.

Cammack mentioned the nation’s fentanyl crisis, the southern border and the firing of the 87,000 new Internal Revenue Service agents the Biden administration is purportedly planning to hire as other major priorities.

She said at the end of it all, the GOP’s main effort will be to get as much government out of the way as possible, since no one can tell people how to live their lives better than they can themselves.

Cammack said she won largely because of the support of independents who want someone that helps America first and that cares about issues that affect all Americans’ everyday lives, like the economy.

As the event neared 10 p.m. and some of the crowd began to leave, the line to speak to Cammack still covered the entire far wall of the room.

Hawk previously had said that running against Cammack had been a lot of hard work and a lot of fun, calling it an uphill battle from the very beginning.

The Democrat said that running in a red-leaning district that was gerrymandered months into the campaign didn’t help.

Hawk had some advice for Cammack’s future opponents: Hold her accountable to her votes because she is the most extreme member of Congress who consistently votes against bipartisan legislation.

She said it’s also important to remember to see the people you are trying to gain votes from as humans, not as Democrats, Republicans or independents. Hawk said that establishing common ground first makes the conversation much easier.

Hawk said she won’t stop fighting for Florida, but wouldn’t say whether she would run for office again. Hawk said she is proud of the work her campaign did in making inroads in the newly redrawn district.

Silas is a reporter for WUFT News who can be reached by calling 352-392-6397 or emailing news@wuft.org.
Previous Single-member districts to be implemented in split Alachua County
Next Ed Book wins tight, ‘clean’ race over James Ingle for Gainesville City Commission seat 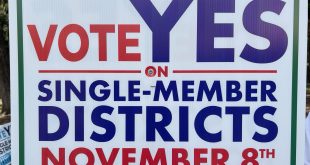