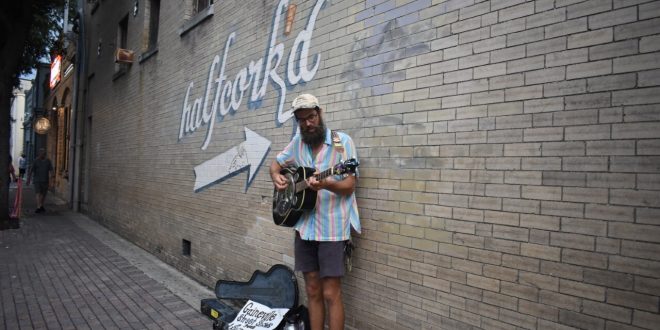 Beats on the block: Gainesville artists are showing their talents downtown

The City of Gainesville is paying street musicians to perform downtown in hopes of bringing more life and color to the city.

“More art, more music, more people getting together as human beings without tearing each other’s heads off in free and open spaces,” said Tom Miller, a local musician and street busker. “It’s the only way we’re going to survive.”

“I just love it because people could come up and sing with me and jam… or people were walking by and it made them feel better. You know, it’s very casual,” said Cathy Dewitt, 73.

Dewitt is a nationally published writer, producer, award-winning jazz composer and songwriter. She is the bandleader for the jazz quartet MoonDancer and host of her radio show “Across the Prairie,” which previously aired on WUFT-FM. Dewitt plays the guitar and piano but says her voice is her main instrument.

All types of instruments and music are played during these street shows. The program welcomes and encourages artists, performers and entertainers of all talents and backgrounds.

Gainesville local artist Tom Miller, 57, performed last month using his iPad as his musical instrument. He was able to play his electronic music through a portable battery-powered amplifier. Tom says his music is designed to be atmospheric and unique.

Miller was born in Miami and moved to Gainesville in 1984. Since then, he has played in several bands and specializes in bass guitar. Miller currently hosts the longest-running continuous live open mic show called “Reverend Angel dusts Tabernacle of hedonism.”

Miller’s goal is to give his listeners a strange sense of place that will wake them up and allow them to engage in the moment.

“Hopefully I set a bar for diversity outside of the regular just type of stuff you might see,” Miller said. “I think busking should include live Shakespeare on the street.”

What makes this program special is that, unlike a traditional concert or performance where artists have to rent a space to perform, the artists are actually getting paid to perform. In other words, the city wants to make money off of bettering the downtown experience, rather than making money off the artist.

Artists are paid $100 per hour and are encouraged to set up a tip jar.

The shows have brought more people downtown on the weekends.

“My friends and I were headed to Cry Babies to grab a few drinks when we saw some people performing,” said Daniela Feijoo, 21, an advertising major at UF. “The artists were singing, dancing and just seemed to be having a really good time. We joined them for a bit and it was a great start to our night.”

The program was inspired by City Commissioner Adrian Hayes-Santos. It was then passed over to the Cultural Affairs Division, along with a budget of $25,000. These funds are used to pay the performers.

The program first launched in the summer of 2022 and has its first artist perform that June.

Musicians interested in taking part in the program must submit an application online and fill out paperwork in order to perform. If their application is accepted, they are able to show their talents and get paid for it.

“Only a few weeks after publishing the application, we received over 80 applicants to the program, almost all local performers,” Carne said. “The program definitely has accomplished its goal, which is bringing music and performance to the heart of our historic downtown.”

At this point, more than 40 unique performers have participated. Many of them have played more than once or twice.

Olivia is a reporter for WUFT News who can be reached by calling 352-392-6397 or emailing news@wuft.org.
Previous Interactive art exhibit brings Gainesville immigrant community together
Next The Point, Nov. 7, 2022: Florida medical boards block treatment for trans youth