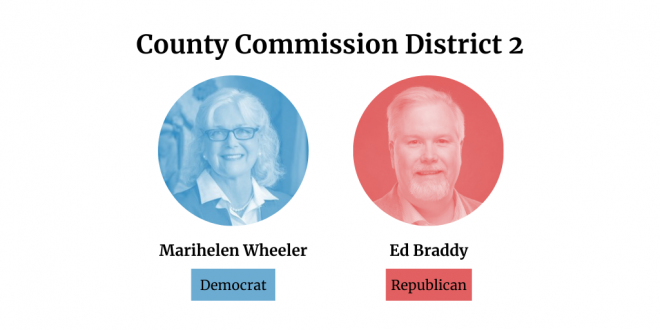 Wheeler is pursuing re-election as the incumbent, while Braddy is making his return to politics after serving as Gainesville mayor from 2013 to 2016 and previously on the Gainesville City Commission.

Wheeler, a 71-year-old retired middle school teacher, is the current chair of the Board of County Commissioners. She is the Democratic candidate in the race.

Wheeler names environmental protection of water sources and preventing substance abuse among youth as some of the issues she hopes to address.

Wheeler said she hopes to work with police departments in Alachua County to diminish current substance abuse. She also plans to work with the school board to implement career development programs that can attract youth to alternative choices.

“We’re trying to make sure that we’re engaging our young people at an earlier age,” she said.

Wheeler is also a proponent of water conservation and sustainable water use. She aims to work on fixing areas that have the highest amounts of wastewater.

“I would really like to see us quit giving our water away,” she said. “I would also like to see us cut back on water usage on lawns. I would like to make it illegal for us to put in ground water sprinkling systems.”

Braddy, 50, is the current chair of the Alachua County Republican Party and is working at Santa Fe College as a testing coordinator. Braddy voices support for the creation of single-member districts for the county commission.

Braddy is critical of the way the current county commission is handling the budget for infrastructure. If elected, he hopes to realign existing revenues to address things like broken roads or run-down infrastructure.

Braddy wishes to address housing affordability at the market conditions and reduce costs at the start of the development process.

He feels that suburban housing is a crucial step in home ownership, and eliminating it creates a gap in the market between what people would normally purchase as a starter home.

“You either get a luxury house in the $400,000 range, or you get nothing you get you're stuck in your apartment,” he said.

Both candidates have had controversies during their time in office.

Wheeler is currently facing a lawsuit that questions her residency in her district in Alachua County, a necessary prerequisite to becoming a county commissioner.

Braddy was charged with a DUI 2006 and has been involved in an investigation with solicitations from a lobbyist during his term as mayor.

Early voting for the midterm general election is going on until Nov. 5. All residents of Alachua County can vote for Wheeler or Braddy on their ballot.

Erina is a reporter for WUFT News who can be reached by calling 352-392-6397 or emailing news@wuft.org.
Previous Florida GOP takes lead in early voting in traditionally blue Miami-Dade
Next Gainesville’s mayor candidates have sparred, but they share a common goal