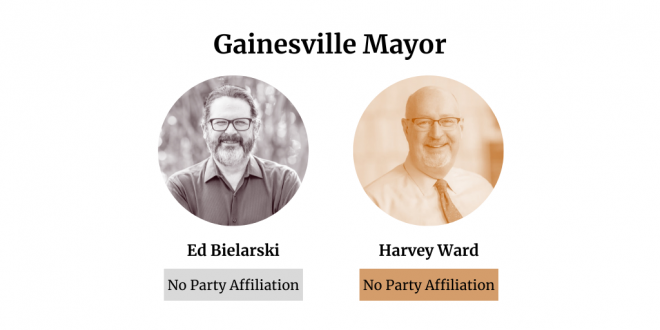 Gainesville’s mayor candidates have sparred, but they share a common goal

After being narrowed down from nine to two candidates, Harvey Ward and Ed Bielarski will be pitted against each other in the Nov. 8 general election. Ward, who has served as Gainesville city commissioner since 2017 and is term-limited, had a 300-vote lead over Bielarski in the Aug. 23 primary election.

Ward, 55, is married with three kids. A born-and-raised Gainesville native, he graduated from East Side High School. Ward attended Santa Fe College and the University of Florida, earning a bachelor’s degree in public relations.

“My family’s been around for a very long time,” Ward said, “I feel like I know this community very well.”

Before ever serving in office, he worked in the nonprofit sector for 20 years. Then, in 2014, Ward decided to run for Gainesville City Commissioner, specifically focused on improving the homelessness problem, which he has attempted to address through homeless camps and other shelters. He lost that election but won when he ran for the same position in 2017. He was re-elected in 2020 and cherished the opportunity to serve.

“I enjoy very much the work of serving the people in city hall,” he stated, “it is a tremendous honor every day when I walk in the building.”

Bielarski, 65, grew up in Maryland. His father was a crew chief for a utility crew, while his mother was a stay-at-home mom. Bielarski graduated from Loyola University, where he got his bachelor’s degree in accounting, and then received an MBA in strategic management from St. Joseph University. He became a certified public accountant in Maryland, where he worked over for 40 years.

“I built a reputation of looking out for the little guy, going after the bigger guy and winning,” Bielarski said.

Since coming to Gainesville, Bielarski’s worked as the Gainesville Regional Utilities General Manager starting in 2015, a position he was eventually fired from in 2022 by Ward. He had worked to get the city commission to stop using GRU customer money to fund projects. GRU made about $20 million a year, and the city commission was taking about $30 million a year out of utilities, which he said wasn’t sustainable.

“Sept. 13 of last year, the city commission tried to fire me,” he remarked, “Two hundred people that came to the meeting were called in at midnight on a work week, and everyone came and spoke on my behalf.”

To Bielarski, this was the moment that affirmed to him he should run for mayor. He felt he had the leadership qualities and was confident enough to take the next step.

While both candidates differ in many ways, they have the same overarching goal – serving the people. Ward says that though he doesn’t believe in one-issue candidates, if there was a single thing he would like to accomplish in the case he’s elected mayor, it would be restoring the public trust he believes is currently low.

Bielarski, similarly, wants the people to believe in the city of Gainesville.

“That we will have made the city a place where people will feel its home,” Bielarski said, referring to what he would feel is his biggest accomplishment if elected mayor, “that they can afford to live, afford to play.”

Whether either candidate can achieve their goals won’t be determined until after their term, but before then, Gainesville must wait for Nov. 8 to find out which man will serve as its mayor.

Eitan is a reporter for WUFT News who can be reached by calling 352-392-6397 or emailing news@wuft.org.
Previous Meet the candidates running for Alachua County’s District 2 commissioner seat
Next Inmates face off in state culinary arts competition