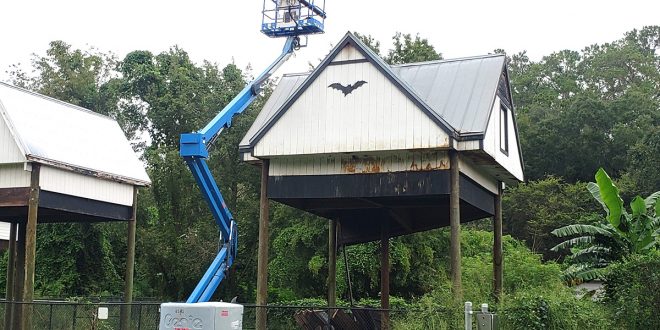 Bats are notoriously picky about moving into a new home, especially when so many have been in one location for so long. (Photo courtesy of University of Florida)

Bats are on the move on the UF campus

The last few months have been a hectic move-in process for thousands of Gainesville residents. Just in time for Halloween, the bats at the University of Florida’s Field and Fork gardens have finally relocated into their new bat barn.

UF facilities staff tore down the oldest of the three bat houses on campus in the days before Hurricane Ian was forecast to sweep through Gainesville. That left the university with the difficult task of successfully relocating the last tiny residents that had refused to move into their new digs.

Bats are notoriously picky about moving into a new home, especially when so many have been in one location for so long. One of the biggest issues was making sure that the bats did not move into an entirely different spot on campus. It was also important to begin the moving process with smaller numbers in different phases. A mass exodus would force the bats to look elsewhere.

Bat biologist Shelly Johnson in UF’s UF Department of Wildlife Ecology and Conservation helped oversee a lot of the move-in process. The plan began in August, when bat pups are usually old enough to begin flying. While UF built the new house five years ago, the bats had refused to move in. This fall, UF staff began closing up space in the old house–and making the new one more inviting with holes, climbing ropes and other amenities. Over the next few weeks, more and more bats finally began to move.

Garrett Donalds, a UF IFAS student and bat enthusiast, became an avid follower of the process last month. He enjoys studying the bats behavior and preferences, and he believes the staff did a wonderful job.

“It’s great to see that all the effort paid off towards a nearly seamless transition,” Donalds said. “There’s certainly a lot to admire and learn from this experience.”

UF’s original bat house was built in 1991 in response to the 5,000 bats that would frequent the UF Percy Beard Track and Field Stadium. The bright lights from the stadium at night would draw out hundreds of bugs that the bats would feed on. The issue got out of hand when spectators complained about the excessive urine and guano littering the field and seats. The University Athletic Association then funded the construction of the new home, but the relocation took multiple attempts.

​​Today, scientists estimate as many as half a million bats live in the houses. Most are Brazilian free-tailed bats, also known as Tadarida brasiliensis. They are common in North and South America, and they frequent caves, hollow trees, bridges and houses as daytime retreats. The proximity to Lake Alice and nearby forests makes the location a great hunting ground for the bats.  So far, the bats seem to be safe and happy in their new home.

The optimal time to see bats flowing out of the houses to hunt is about 15 minutes after sunset, but arrive before then to get a good spot. Bat experts recommend wearing old clothes and a hat to avoid the large amounts of urine falling overhead.

Nicholas is a reporter for WUFT News who can be reached by calling 352-392-6397 or emailing news@wuft.org.
Previous It’s McCray vs. McCray for the District 3 school board race in Lafayette County
Next Food System Policy Board members raise questions about board’s effectiveness

They may all be cute and cuddly creatures, but the odds are stacked against them to get adopted.