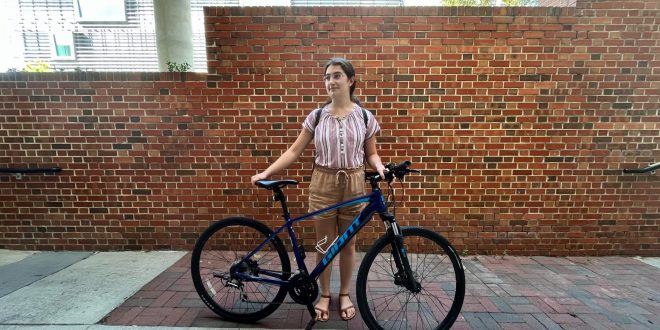 Getting Big Boy back: How one student reclaimed her lost bike.

Most victims of bicycle theft may never see their bikes again, but Stephanie Miller saw hers with someone else on it. She pursues.

Stephanie Miller, a 19-year-old UF student, confronted a stranger on her missing bike on Sept. 19. Miller’s bike, what she calls her “big boy,” was stolen almost a month prior from her apartment complex, 2nd Avenue Centre, on the night of Aug. 26. Big boy was missing when Miller went to unlock her bike from the bike stands in her neighborhood at 8 a.m. to go to class. Even the lock was gone. It wasn’t until she left campus three weeks later on a new bike that she would see her old bike again being ridden by a stranger. The confrontation would end with both parties happy after an exchange.

“I think there needs to be more awareness about like getting a new lock. It’s really important. A lot of locks can get cracked really easily, especially the cable locks,” Miller said.

Miller is an avid biker and uses her bike as her primary mode of transportation and exercise. She said she bikes everywhere and regards RTS as unreliable.

“But I haven’t really been biking since it got stolen,” she said.

Miller said it’s not all bad luck, explaining she’s a bit to blame. She said that recently she had been getting lazy and just using a rusty old cable lock to secure big boy. A cable lock is, just as it sounds, a lock with a usually short cable used to attach the bike frame to a bike rack. The problem with cable locks is that they are terribly unreliable, just as Miller was soon to find out.

When Miller’s bike was stolen, she spent weeks looking for it everywhere she could think. She hoped to find her bike but had to find a new mode of transportation. She filed a police report and checked pawn and bike shops and the bike racks at UF every time she was on campus.

An elderly friend gave Miller a replacement bike she had been using to get around after losing big boy. Even though she hadn’t seen big boy in weeks, she wasn’t ready to give up on it.

On Sept. 19, when Miller was leaving campus going down 13th Street on her way home, she saw big boy. It wasn’t locked to a bike rack or lying on the ground but being ridden by another person.

“And then I see this man biking with what looks like my bike, right? So I swerved on a red light, I basically said, this is my chance, and then I started following him.”

Miller pursued what she presumed was her bike but wasn’t exactly sure from over 100 feet away. She said as she got closer after following for about 100 meters, she became more and more convinced about it being her bike.

Miller said when the man was at the intersection of University Avenue and 13th Street, she decided to yell out and stop him, worried he might head somewhere less public and safe.

“Excuse me, sir, could you stop for a second?”

Miller said once the man got off the bike, she knew that he was riding her big boy. With some attention to the bike as they exchanged pleasantries, she noticed it had a broken hand brake, custom lights, and even the UFPD registration sticker. These were all tell-tale signs it was big boy.

Miller asked the man where he got the bike. He told her he was borrowing his friend’s bike. He then told Miller he had just gotten off probation and pointed toward the Gainesville Police Department.

Miller told the man that this was her bike that had been stolen from her apartment weeks before. She explained she would call the police and that she had filed a police report about the missing bike, which the man initially seemed to be unconcerned with.  She said he told her to “go ahead.”

Miller said just moments later she heard a question she never expected to come out of the man’s mouth.

“Why don’t we switch bikes instead?”

Miller said she was confused, but more than that, she was relieved. She said this was perfect on every level for her because he probably wouldn’t wait for the police to get there.

“So I was like, this is really convenient. If I just swap, you know we don’t have to get the police involved.”

Miller said that the longer she was with him, the more she felt things were getting weird and even dangerous. She said she felt safe on a big street with lots of traffic but swapped bikes quickly and went home feeling luckier than most theft victims. It seemed the dance of the bikes was over.

Miller said she’ll be protecting her big boy much better now with a better lock known as a U-lock.

Gainesville is known for its problems with bike theft. It’s almost a rite of passage to have your bike stolen here. Just months ago, the Gainesville Police Department arrested and charged a serial bike thief. The man is a well-known bike thief to the GPD and the University of Florida Police Department.

Miller said she was absolutely lucky the encounter went the way it did. In September of last year, a Gainesville man Horace Campbell was arrested by GPD after he stole a bike and then threatened the owner with a knife when confronted.

Miller said she was trying to avoid conflict when approaching the man. She just wanted her big boy back.

“So I was like, let me not make more conflict. Let me just switch because I got the other bike for free, so I can just switch,” Miller said.

Miller said she’ll be using a U-lock – maybe even two – every time she leaves big boy anywhere. She’ll be keeping her bike inside at night from now on just as an extra precaution.

Miller had a few words for Gainesville bike owners.

“Get a U-lock! Just be careful at night. Also, if you have anything on your bike or any attachments, take it with you because they will steal anything.”

Marshall is a reporter for WUFT News who can be reached by calling 352-392-6397 or emailing news@wuft.org.
Previous The Point, Oct. 26, 2022: Gainesville mayoral candidates trade barbs during debate
Next Hurricane Hunters: How they protect Florida and others around the world