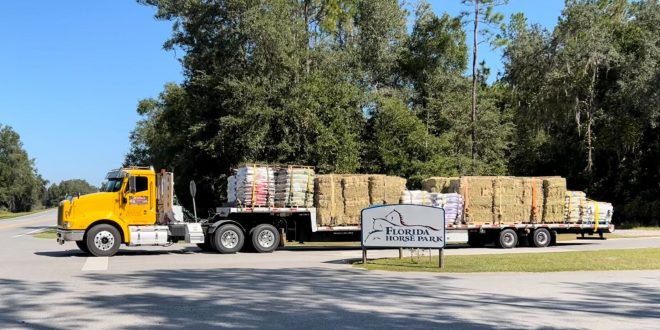 A flatbed truck leaves Florida Horse Park with supplies to bring to horse owners in Southwest Florida. ”If anybody can pull something together and has the network to do this, it would be Louisa,” Kelly Moore said. (Photo courtesy of Louisa Barton)

Louisa Barton had no idea that one Facebook message would change the trajectory of her next few weeks.

Immediately after Hurricane Ian hit Southwest Florida, Barton opened her phone up to a direct message from Kelly Moore, a member of the Ocala Equestrian Community.

Moore reached out to get support for her friend Kathy Genth, owner of Branded Heart Stables in Englewood. Genth’s barn had been destroyed by the hurricane with a collapsed roof and no dry or sheltered area for more than 30 horses that she managed. She was devastated when she saw the destruction and called on Moore for help.

“It was heart wrenching,” Moore said. “I know how much she loves her animals and I felt so extremely helpless.”

Moore knew that if anyone were able to find a way to help her friend and other horse owners in the Southwest Florida community, it was Barton, who holds the titles of director of equine engagement and assistant director of business attraction of the Ocala County Chamber of Commerce as well as host and executive producer of the Horse Talk Show.

“If anybody can pull something together and has the network to do this, it would be Louisa,” Moore said. “And holy smokes did she do a bang-up job.”

Barton accepted the challenge and has devoted her time since to hurricane relief efforts.

“The resources we have here [in Ocala] are unbelievable,” Barton said. “So, if we, as the horse capital, can’t reach out and help our fellow horse owners down south, who will?”

She contacted multiple companies, organizations and people to collect donations and supplies, including Larsen Farms and the Florida Mounted Unit.

Larsen Farms initially donated $7,500 but then doubled it to $15,000 worth of product once the team learned the extent of destruction.

Florida Mounted Unit President Tamie Leedy spread the word of Barton’s endeavors and got other members on board with donating and delivering supplies.

The Friday following Hurricane Ian, Barton and Betsy Bevacqua, who works in sales, marketing and events for Larsen Farms, packed Bevacqua’s truck and horse trailer with hay bales and horse bedding shavings. At 10 a.m., they headed to Southwest Florida for the first of many relief trips.

Florida Mounted Unit member and West Florida Fence partner owner Danyelle McGinity and husband Brian McGinity decided they wanted to join in on the embarkment to Englewood. They brought wire fencing, posts, around 40 bales of hay and other supplies with them.

On their journey down, both pairs did not know what to expect and were startled by the flooded roads, fallen trees and debris.

“It was like driving through a lake,” Danyelle McGinity said.

When they got to Branded Heart Stables, they saw the destruction for themselves and immediately felt an impact.

“It was worse than we thought,” Bevacqua said.

With a blown off roof, fences underwater and flooded stables, the group knew that they had made the right choice to travel down to Englewood.

Genth’s gratitude left a mark on the group as they saw how much of an impact they could have on a community that needed it more than ever.

“She put her trust in complete strangers to care for her beloved animals,” Danyelle McGinity said. “I can’t ever imagine having that feeling. So, if I could offer someone a little bit of relief, I would do it in a heartbeat.”

Danyelle and Genth McGinity realized that Friday that they had something in common: hope for better days.

Genth provides therapy with her miniature horse named Hope. While Danyelle McGinity has the word “hope” tattooed on her wrist.

“She immediately saw it and started crying,” Danyelle McGinity said about Genth. “We were there to provide hope in that very moment of their disaster.”

Danyelle McGinity ended up taking three of Genth’s horses back to her home in Pasco County. As time went on, more and more horse owners messaged her and asked if she would take their horses as well. She currently has eight horse evacuees at her 50-acre home.

Barton, Bevacqua, and the McGinity’s knew that trip would not be their last.

“Seeing the need from one farm to the next just kept resurfacing and we thought we had to do something more than just help one time,” Danyelle McGinity said. “This is an ongoing need.”

The four have taken multiple trips since that life-changing Friday. Some together, and some separate. But all with the same group effort and intentions of making a positive impact.

As word spread around about the efforts, more and more people began to donate supplies and funds to help the horse owners in need.

Barton set up a GoFundMe to give people a space where they could donate remotely.

Hall of Fame Horse Trainer Mark Casse donated $5,000 worth of feed and hay. Local farms around the Ocala area like Big Sexy Stables had also generously donated to the effort.

Events in Ocala, such as the Hobby Horse Equestrian Games on Oct. 22 at Florida Horse Park, are set to take place in an effort to raise funds for those affected.

More than $70,000 worth of supplies had been raised and donated since Hurricane Ian hit Florida in late September.

“The contacts and friendships I’ve developed over the years are really showing up for those in need in South Florida,” Barton said.

Donations get dropped off at Florida Horse Park in Ocala. From there, the supplies are transported to the southwest area of the state and taken to different distribution points including Fox Lee Farm, White Horse Farm and Arcadia where horse owners can pick up supplies.

Because of the donations and funds, hundreds of horse owners in Southwest Florida have been helped and brought back to a state that both them and their horses can live safely in.

“If this had happened to my community, the people that I would call on would not be able to help me because we would all be in the same boat,” Danyelle McGinity said. “It takes a village to help a village.”

Amanda is a reporter for WUFT News who can be reached by calling 352-392-6397 or emailing news@wuft.org.
Previous What Florida voters need to know about Amendment 3 before Election Day
Next City of Ocala celebrates Mobility Week 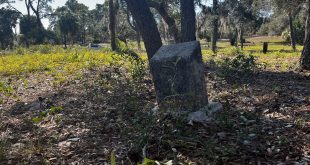