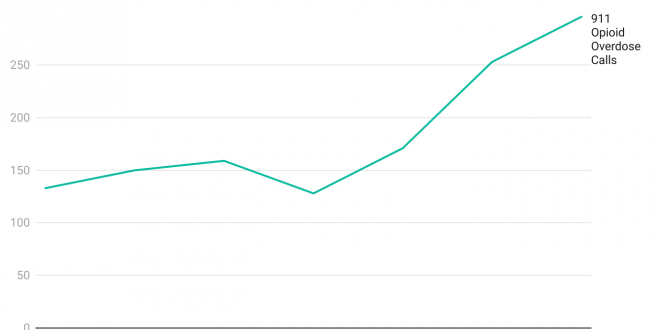 Alachua County has seen an overall increase in opioid-related 911 calls over the past six years — more than twice as many calls from 2021 compared to 2015. Numbers from 2022 are still rising. (Siena Duncan / WUFT News)

Alachua County has seen an overall increase in opioid-related 911 calls over the past six years — more than twice as many calls from 2021 compared to 2015. Numbers from 2022 are still rising.

As a state, Florida saw nearly five times as many opioid-related emergencies from 2021 compared to 2015.

In response, the Florida Department of Health in Alachua County has been providing naloxone,  a medicine that can stop an opioid overdose, to people in overdose situations since January. Paul Myers, administrator for the Alachua branch, said the department also has begun making naloxone orders for people in contact with others at high risk for an overdose.

You must be above 18 years of age and prove you are a caregiver for someone at risk to make an order, Myers said. Orders are free, arriving from the Florida Department of Children and Families.

Myers said he attributes the opioid overdoses increase to the recent spike in illicit fentanyl usage. Fentanyl is a type of opioid typically used as pain medication.

According to the National Institute on Drug Abuse website, fentanyl is the most common drug causing overdose deaths in the United States today.

People may be seeking drugs like Xanax or Percocet, Myers said, but then unknowingly receive pills also mixed with fentanyl. That is why the Department of Health has reason to believe the majority of these overdoses are accidental, he said.

“A small amount of fentanyl can kill you,” Myers said. “It’s being laced into these street drugs and that’s what’s killing people.”

To combat the increase, the Florida Department of Health has announced an initiative to provide naloxone, a medicine that can stop an opioid overdose, in county health departments across the state. The announcement came on Sep. 1, International Overdose Day.

The initiative will first focus on 16 counties, including some in North Central Florida: Baker,  Bradford, Hamilton, Lafayette, Madison, Suwannee and Union. The county health departments will each receive 1,500 naloxone kits to distribute to residents for free.

Eventually, the initiative will include all 67 counties, according to a Florida Department of Health press release.

COVID-19 may have caused more people to seek out fentanyl due to a lack of access to “prevention, treatment, harm reduction and recovery support services,” according to a July 19 media statement from the Centers for Disease Control and Prevention.

Three health facilities in Alachua County have been fighting the opioid crisis for several years now. According to I SAVE FL, a government program dedicated to stopping Floridian overdoses, Meridian Behavioral Healthcare, GRACE Marketplace and UF HealthStreet are the only providers of naloxone in the county.

All three currently get their supply from the Florida Department of Children and Families for free. All three are also located in Gainesville. They provide a brand of naloxone called Narcan that comes as a nasal spray.

It can be used to help someone who is overdosing on narcotic drugs, which include opioids. The three facilities provide Narcan free of charge.

Catherine Striley, deputy director of UF HealthStreet, said she agrees that the introduction of fentanyl has contributed to the danger of opioids in Alachua County.

“Fetanyl is making its way into a lot of products,” Striley said. “And it’s very, very strong.”

Based on demographic information that the 911 calls have collected, Striley said no group is more at risk than another.

“This is an equal opportunity killer,” Stripley said.

UF HealthStreet has been distributing Narcan since January 2020.

They don’t specifically target any specific areas, she said. Instead, they track where the most opioid-related 911 calls have been made, like public restrooms in restaurants, and distribute Narcan in those areas. Those places change from week to week, Rosales said.

“I think it’s really important not to think of naloxone as something for a given community,” Striley said. “You never know when someone in your family or circle of influence will need it.”

Meridian Behavioral Healthcare has distributed Narcan since 2016. It’s given out about 800 Narcan kits to Alachua County over the past six years through its substance abuse residential program.

With the recent increase in opioid 911 calls, Meridian Behavioral Healthcare has been giving out more Narcan this year, she said.

She said she thinks the new effort from the Florida Department of Health to distribute naloxone is a good idea.

“The more Narcan we can get out into the community, the better,” Mihlfeld said.

Narcan, she said, gives someone the ability to save a life in an overdose situation.

“You’ve got to make sure that you’re doing something to try to reverse it as soon as possible,” Mihlfeld said. “The longer they stay in an overdose situation, the higher chances are they can just slip away.”

Siena is a reporter for WUFT News who can be reached by calling 352-392-6397 or emailing news@wuft.org.
Previous The Point, Oct. 21, 2022: Civil rights groups call for change after voting fraud arrests
Next Judge orders former UF physician to mental health counseling, community service