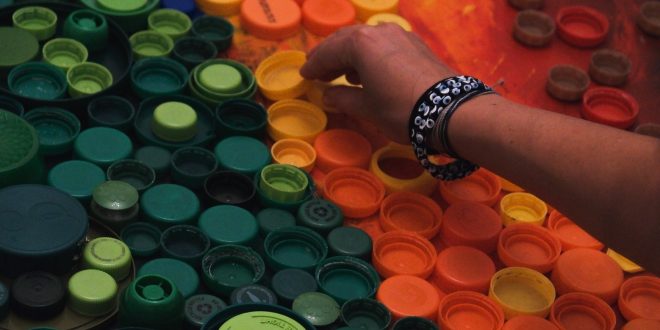 The #UNLITTER mural will be unveiled on October 20. The organization has been working hard on the project to reinforce its message of keeping the environment safe. (Alexander Gonzalez / WUFT News)

Bottle cap mural to be unveiled in Gainesville City Hall

A bottle cap mural is set to be unveiled during a City Commissioner meeting on Oct. 20 from 5:15 p.m. to 7 p.m. The mural is a piece done by #UNLITTER at the University of Florida, which is part of a global nonprofit dedicated to normalizing sustainable habits through community outreach and events.

​“The mural was my onboarding idea,” said Chloe Schwab, 21, the event coordinator for #UNLITTER at UF. She housed most of the bottle caps in her home for a year and a half. Schwab said she still has bottle caps in buckets on her balcony.

​The organization received approval from mayor Lauren Poe in September 2021. The artwork is meant to unite the community, reduce waste, and convey that recycling properly is important for the environment. Although bottle caps can be recycled, Gainesville does not recycle plastic bottle caps of any kind, according to the Gainesville recycling resource guide, which means they end up in landfills.

The mural is made up of completely repurposed materials and contains over 75,000 plastic bottle caps; a small number compared to how many caps are not being used for it. According to a press release from the organization, a cleanup and community event will follow alongside the unveiling, including local clubs, creators, live music and food.

​“I wasn’t aware that bottle caps aren’t recyclable until recently,” Sanchez said. “I thought I was able to recycle anything that’s plastic, but this is good to know.”

The event aims to inform people in the community about recycling properly and what unproper recycling can do. It, also, aims to educate and motivate people to protect the natural environment from unrecyclable objects, such as bottle caps.

Mayssa Shalhoub, 21, the head of design for #UNLITTER at UF, oversaw the mural creation. “These caps should not exist in the first place,” she said. “They’re not beautiful things outside of the context of this artwork.”

Chloe Schwab said simply unscrewing the caps from all your plastic materials will help increase the recycling rate in Gainesville. There are a variety of items, which are not recyclable in Gainesville; however, there are proper ways to go about getting rid of those unwanted items.

Matt Kriz, a store coordinator for the Repurpose Project, said all it takes to be educated on proper recycling is doing research.

“We get bottle caps multiple times a day and by the bag full,” Kriz said. “Alachua County is pushing a cohesive and robust recycling wizard, which tells you what items are recyclable and what items aren’t.”

Nonprofits like the Repurpose Project and Gainesville Women’s Club reuse items that would otherwise go to landfills for art and educational purposes.

“I see so many bags of garbage near the trash compactors at Cabana,” he said. “I bet some people even put plastics in there because they either don’t care or don’t realize what it may do to the environment.”

Shannon Sawtell, 21, the director of the organization said the mural has propelled them into different bonds with other organizations in Gainesville.

“We’ve been able to partner with UF Green Greeks, which has allowed us to help with recycling on game days,” she said.

The community of Gainesville isn’t the only one facing these problems.

#UNLITTER at UF interacts with other communities of #UNLITTER from other places. Shannon Sawtell said there are problems in all the communities.

“You can solve these problems by rallying people together and igniting passion,” she said. “Light that fire because the flames will not die out.”

The mural became a community project, with people, schools and other organizations bringing them bottle caps for the cause.

“To have that platform of City Hall and so many people being able to see it and hear the message is so important,” said Isabella Marti, 20, the assistant director for #UNLITTER at UF. “I hope it reminds people of the beauty of our local environment and how we should care about it and want to protect it.”

“I’m very grateful we get to do this,” Mayssa Shalhoub said. “We have a great team and I’m beyond excited and honored to present this to the city.”

Alexander is a reporter for WUFT News who can be reached by calling 352-392-6397 or emailing news@wuft.org.
Previous Farmers prepare for cold weather in potential loss of crops
Next UK’s Liz Truss quits after turmoil obliterated her authority