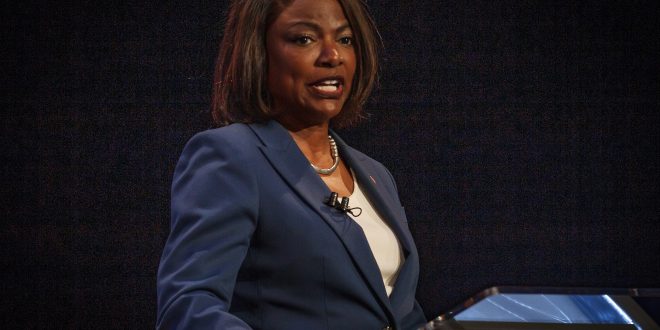 Behind scenes at Senate debate: Different styles for Demings, Rubio

Editor’s note: This article has been updated to remove a reference that reported incorrectly that only Rubio’s press team spoke to credentialed reporters after the debate. Both candidates sent representatives into the spin room.

WEST PALM BEACH, Fla. – As the sun set and Lynyrd Skynyrd’s “Sweet Home Alabama” blasted through the streets outside the venue of the Senate debate here, the sky was painted red, white and blue as people passionately pumped their flags and signs in the air outside of Tuesday night’s political arena.

“I’m trying to convince these knuckleheads here that they’re on the wrong side of the movement,” said Terry Williams, a 52-year-old Republican transplant from Montreal with knuckles white from gripping a Trump flag twice his size.

Inside, as the debate got underway at 7 p.m., Republican Sen. Marco Rubio and Demings, a Democrat, took the stage behind lecterns only a few feet from each other – but their objectives and their personal styles were miles apart.

From the moment the candidates took their places, opposition hovered in the air, setting the tone for the intense evening.

Rubio, the incumbent and ahead in most political polls, never reached Demings’ intensity in his answers, his voice rarely rising even during testy moments. Still, he lobbed loaded verbal attacks at Demings – his closest re-election opponent in more than a decade – calling her an extremist on abortion rights, a do-nothing congresswoman and trying to tie her to the “crazy policies of the left.”

Rubio’s debate strategy appeared to focus on taking digs at Demings where he thought he could, but mostly defending himself and the 11 years he has spent in the Senate.

As challenger, Demings needed to raise doubts about Rubio in the minds of moderate voters. She was far more animated, stabbing her finger and turning to face Rubio directly on stage. She noted that Rubio had promised after the high school shootings in Parkland, Florida, that he would support legislation to prevent an 18-year-old from buying an assault rifle – but he no longer does.

Rubio’s explanation: “Denying the right to buy it is not going to keep them from using it.”

“Families of victims of gun violence heard that and they’re asking themselves, what the hell did you just say,” Demings said.

“This is about taking dangerous guns out of the hands of dangerous people,” Demings said, her voice rising. “The overwhelming majority of people in our nation want us to do just that. How long will you watch people being gunned down in first grade, fourth grade, high school, college, church, synagogue, grocery store, movie theater, a mall and a night club and do nothing?”

In colorful ways, Demings repeatedly called Rubio a liar in talking about her policy positions.

The candidates occasionally ran over the debate moderator, WBPF anchorman Todd McDermott. Rubio pledged to accept the outcome of the Nov. 8 election, but Demings – asked the same question by Rick Christie of the Palm Beach Post  – pivoted to talk about protecting voting rights.

“Let me just get you on the record here that you will support the results of the 2022 election,” McDermott asked Rubio.

“We have great laws in Florida, absolutely,” Rubio said.

“But will you?” McDermott asked.

“Sure, because I’m going to win, so I look forward to supporting that,” Rubio said, to a moment of applause from the audience. “But,yes, no matter what the outcome is, I’ll support it.”

Christie, the newspaper’s executive editor, noted that Demings wasn’t given the chance to make the same pledge.

“I don’t think we gave Congresswoman Demings the—” said Christie, but he was interrupted by McDermott, who said: “I believe we’re going to move on here to the next question.” Christie shrugged and said “OK.”

Elena is a reporter for WUFT News who can be reached by calling 352-392-6397 or emailing news@wuft.org.
Previous Migrant workers among those experiencing food insecurity after Hurricane Ian
Next Gov. DeSantis’ presence at Republican fundraiser draws protests by progressive advocacy groups