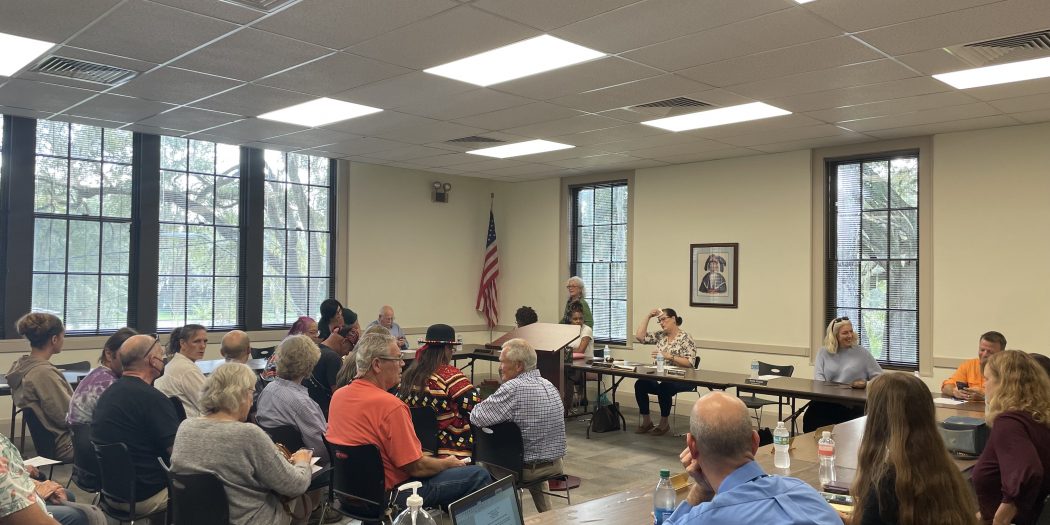 In a joint meeting Tuesday between the Board of County Commissioners (BoCC) and the Town of Micanopy, the BoCC postponed talks of a timeline for the town’s purchase of the soon-to-be-annexed Tuscawilla Property until after the workshop. A public workshop will be held Nov. 17 to discuss next steps.

County Commissioner Ken Cornell, who said he wouldn’t move forward with the purchase until Micanopy put forward plans, said, “It’s important to me that the community has input.”

It will be the first gathering in Micanopy to draft building plans for the historic site. The workshop will be held in Town Hall at 6 p.m., and the public is encouraged to attend.

The land in question sits adjacent to the Micanopy Native American Heritage Preserve
(MNAHP) at the southern entrance of the town and is believed to be the site of the Second
Seminole War. Sheridan Murphy, a member of the Indian American Movement and the Florida Indigenous Alliance, said that prior to the battle, it was a Native burial site.

He and other Micanopians were part of a nearly two-year long dispute with Dollar
General, which wanted to use the land for a new location. The county settled with Dollar General in June and purchased the property.

On Oct. 11, Town Administrator Sara Owens sent a letter to the BoCC to propose the
purchase of the Tuscawilla Property from the county for $170,000 to be annexed into the
MNAHP. Half the funding would come from the county’s Wild Spaces Public Places grant
program, wherein the town would put up $85,000 to be matched by Alachua County.

Despite not having official plans to offer the BoCC, Mance and the City Commissioners
have several ideas for what they’d like to see happen.

Mance, at the counsel of Martha Tommie, a Seminole, wants to “keep the land
untouched.”

“It is an ancestor location,” she said. “It is the location of the Second Seminole War. This
land holds as much treasure from those souls who died there as the Native American Heritage Preserve next to it.”

She proposed a raised nature boardwalk that would allow wildlife to walk beneath it and
visitors to experience the land without stepping foot on it. She also would like to provide a
meeting space, such as an amphitheater, as well as an education center.

City Commissioner Jiana Williams said she thought it was doubly important to have
more education spaces for the MNAHP surrounding the history of Micanopy’s Native American history.

The commissioners discussed using a currently unused existing building in the MNAHP
to convert into a museum. Mance said that money given to the town for the property would go toward creating the education center and keeping it staffed so that people could have a more in-depth experience.

Mance said she intends for the education center and boardwalk to increase tourism and
school field trips to the Preserve.

Residents Megan and Jeffery Forbes have lived in Micanopy since 1997. As graduates of
the College of William and Mary, they’re familiar with both the preservation of history and the delicate relationship it has with Native Americans.

Jeffery said that Micanopy sits on a “crossroads of history” and that by annexing the land
and incorporating it into the Preserve, the town would celebrate its ties to its indigenous peoples.

They both said that expanding the MNAHP would be a boost for the area’s ecotourism,
especially if the land was left as is.

During the Public Comment portion of the meeting, Tommie said she was in the process
of translating “ancestor’s memories” from English into Creek for the town to display in the
proposed education center.

“I want to thank you,” she said through tears, “for honoring my ancestors.”

Robert Rosa, also a member of the Indian American Movement and the Florida
Indigenous Alliance, recommended that the town reach out to the Reconciliation Park in
Mankato, MI, which honors the 38 Sioux victims of the “largest mass hanging” in the United
States.

“It’s the only other park in the nation,” he said, “that has the same resonance.”

Paris is a reporter for WUFT News who can be reached by calling 352-392-6397 or emailing news@wuft.org.
Previous Keeping the tradition of quilting alive through charity and community service
Next Meet the Candidates Running for Hernando County School Board District 1