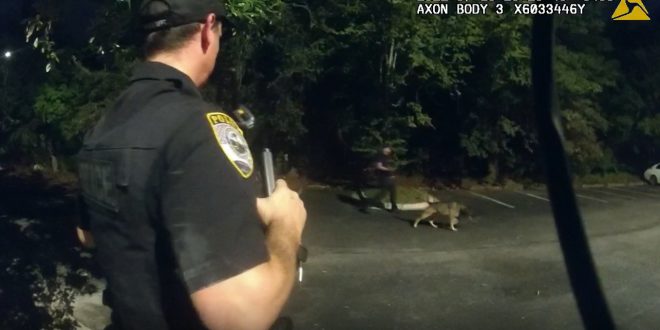 Gainesville police Cpl. Josh Meurer is seen with K9 Ranger in a screenshot from this police body-camera video on July 10, 2022, searching for Terrell Bradley, 31, of Gainesville, Florida, who had fled a traffic stop earlier that night. Bradley lost his right eye after Ranger bit him while Bradley was hiding in bushes at an apartment complex. Police said this week that Ranger – the subject of warnings that he was prone to bite even fellow police officers – was quietly returned to duty on Sept. 23, 2022. (Courtesy of Gainesville Police Department)

The Gainesville police K9 that mauled a man who fled a traffic stop and was the subject of warnings that he was prone to bite even fellow police officers has been quietly returned to duty, authorities said.

The K9, named Ranger, had been temporarily removed from duty after community uproar over the arrest on July 10 of Terrell Bradley, 31, of Gainesville. Bradley lost his right eye after Ranger bit him while Bradley was hiding in bushes at an apartment complex.

Ranger was pulled from duty and underwent refresher training but was put back into service on Sept. 23, police said this week. No one from the department responded immediately to questions about whether the dog would be used – or prohibited from use – in East Gainesville, the predominantly Black section of the city where the incident took place and community outrage was most strident.

Ranger’s return-to-duty date was the same day that Gainesville police announced minor disciplinary actions against five officers in the case. In a 19-page document about the case it released publicly that day, police did not mention Ranger was returning to the city’s streets.

Bradley, convicted of unarmed robbery in 2010, had fled a traffic stop on foot after a brief conversation with an officer who pulled him over. After he fled, police found a stolen, loaded pistol wedged between the driver’s seat and center console and ammunition in the trunk.

After a 43-minute search that night that extended to the grounds of nearby apartments, Ranger growled and charged into bushes where Bradley was lying. Earlier in the search, Ranger’s handler, Cpl. Josh Meurer, warned his fellow officers that, “he doesn’t care, he’ll grab anybody.”

Meurer later told investigators he meant that, if Ranger was tracking a scent, he would not necessarily recognize a police uniform or discriminate between an officer and a suspect.

After Ranger found and bit Bradley in the bushes, Bradley yelled, “He got me bro, I’m done,” and said, “Get your dog,” according to police body-cam video from that night.

Meurer was forced twice to use a “breaker bar” – a metal rod inserted in the dog’s jaws – to pry loose Ranger, police said.

Bradley is charged in the case with three felonies – possession of a firearm by a felon, carrying a concealed firearm and battery on a police officer – and a misdemeanor charge of resisting an officer without violence. He has pleaded not guilty. His next court appearance is Oct. 25.

A judge this week gave permission for Bradley to temporarily remove a GPS device he was required to wear so that he could undergo an MRI, a diagnostic procedure to produce images inside his body. Bradley was ordered to have the device reattached after the procedure.

Police on Sept. 8 announced their conclusions of an internal investigation that found broadly no policy or legal violations in Bradley’s arrest. Part of that review included asking an outside consulting firm, V2 Global of Miami, also to conduct its own inquiry.

Newly disclosed records revealed that the city paid $8,397 to the firm for its work, which involved one employee – a K9 expert named Greg Terp, a former commander of the Miami-Dade Special Operations Bureau – traveling to Gainesville for one overnight visit. The firm also spent weeks reviewing police video and written policies.

The outside review did not include interviews with Ranger’s handler or other officers directly involved in Bradley’s arrest because V2 said the city’s own internal investigation was ongoing at that time. The city’s investigation was wrapped up on Sept. 7.

The V2 review was completed Sept. 2, and Gainesville police presented it publicly on Sept. 8. There was no evidence in dozens of internal emails with the firm that police sought directly to influence the firm’s conclusions.

Like the department’s own review, the V2 review exonerated police and largely blamed Bradley’s own conduct: “Mr. Bradley made the choice to conceal himself from the officers and he could have prevented any contact with K9 Ranger by allowing the officers to know where he was hiding,” the V2 report said. “There were 45 minutes he had the opportunity to surrender, although Mr. Bradley chose not to surrender and caused the search.”

The V2 study did not mention Ranger’s propensity to bite fellow officers, as described by his handler, and did not indicate whether it was unusual for police to require a metal rod to be inserted into a dog’s jaws to force him to stop biting someone.

Fareed Johnson, a past chairman of the Gainesville’s Police Advisory Council, said he does not believe the V2 investigation was meant to sway public opinion and was part of a process by the police department to make sure officers had not violated laws or rules.

Johnson said the council will discuss the investigation once it has more details. Its next meeting is Oct. 26, one day after Bradley’s next court appearance.

Silas is a reporter for WUFT News who can be reached by calling 352-392-6397 or emailing news@wuft.org.
Previous New surveys of Florida colleges, universities fail to support concerns over anti-conservative sentiment
Next A celebration of light comes to Celebration Pointe