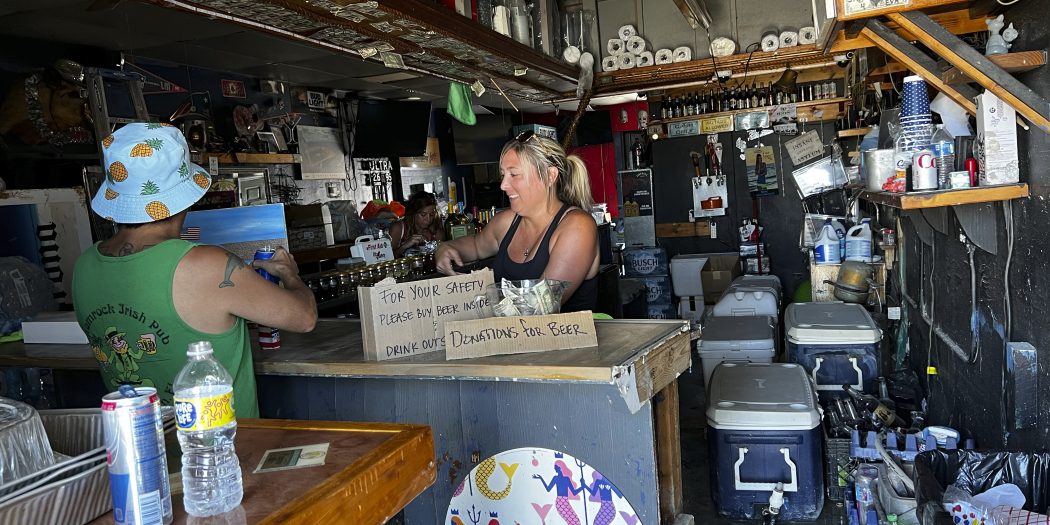 Ashley Galassi, a bartender at Tina’s, a watering hole at Fisherman’s Wharf in Fort Myers, Florida, attends to a patron on Friday, Oct. 7, 2022. She says the bar will likely be demolished and reopen elsewhere. Hurricane Ian might have come and gone, but it has done long-term damage to the small businesses of a region heavily dependent on tourists and seasonal residents. (AP Photo/Bobby Caina Calvan)

FORT MYERS, Fla. (AP) — Hurricane Ian might have come and gone but it could deliver prolonged blows to the local economy, walloping small businesses heavily dependent on tourists and seasonal residents.

The scenes of destruction in southwestern Florida will keep many winter tourists and snowbirds away as well as tasking local residents with rebuilding for months or more, said Michael Maguire, a manager for a group of family-owned restaurants, including a couple on hard-hit Fort Myers Beach.

“It will not be the same,” Maguire said, standing outside the Pinchers seafood restaurant in the Fisherman’s Wharf area of Fort Myers. “It could be months, it could be years. We don’t know. People that live in the area are not going to be in shape to go to restaurants.”

Ferocious gusts ripped off roofs, collapsed walls and jolted buildings off their foundations. Flooding — including tidal surges of more than a dozen feet — inundated shops, bars and restaurants. Fisherman’s Wharf, a heavily touristed area, turned into a dusty and surreal scene, with boats capsized far from their usual moorings. Dust and the rancid smell of hardening muck still fill the air.

As the winter months approach, business would have been picking up. Bars, restaurants and the many mom-and-pop shops that line San Carlos Boulevard, the thoroughfare into Fort Myers Beach, would usually begin filling. The start of snow crab season in mid-October would usher in brisker business.

Tourists lift the region’s economy during winter as do snowbirds with vacation homes to escape the chill in the upper Midwest, the Northeast and Canada. “That’s where our business comes from,” Maguire said.

Even before the storm, there were mixed economic signs for Fort Myers and the rest of Lee County, where U.S. Census Bureau figures show that more than 60% of the businesses have less than five employees.

The Florida Department of Economic Opportunity reported that unemployment in the region had continued to fall since last summer, as the economy rebounded from COVID — with the biggest growth in the leisure and hospitality industries. In Fort Myers, the sector added 2,700 new jobs in May over the same month the year before.

However, the number of airport passengers in southwest Florida had already fallen in July 2022, slumping 13% from a year before, according to an economic study of the region by Florida Gulf Coast University. Tourist tax revenues were down 2% for the region, with Lee County down 4%. The study partly blames inflation for that downturn.

With a family to support, including two young children, fisherman Jake Luke can’t afford not to be with a job.

“Right now, we’re selling stuff, selling stuff we don’t need. I’m doing odd jobs — 50 bucks here, a 100 hundred bucks there,” he said. “We’re about eight days behind on rent and I’ve been thinking about calling family for a loan.”

It was still the slow season when the hurricane hit, but the busy times for seafood restaurants and fishing excursions were just ahead. “When the season comes, I’d be working five or six days a week — but it doesn’t look like we’ll have a season this year. It means I’m going to be losing $50,000 a year” that he’d otherwise earn.

Lee County’s population is almost 788,000 people. It’s difficult to say exactly how much the population increases from snowbirds, but a substitute measurement — gross retail sales — historically jumps by almost a third during the height of the season in January compared to the dog days of late summer.

But many snowbirds likely won’t return this year because of damage to their vacation homes or because amenities — like shops and restaurants — won’t have yet fully recovered.

James Kratzke, who has a house on Fort Myers Beach, said water reached nearly to the ceiling in his vacation home. Family members were on their way to inspect the damage. He was at home in Wisconsin when the storm hit and doesn’t know when he’ll return.

Across the area, crews have been demolishing buildings teetering on their foundations. Homeowners tried to salvage what they could from their soaked homes — racing against time, mold and mildew.

Some business owners could do nothing, the storm leaving their livelihoods torn asunder, including many restaurants. GoFundMe campaigns have sprung up to help restaurant workers who have lost their jobs.

“The business here is over, but we will rebuild somewhere else,” said Ashley Galassi, a bartender at Tina’s, a watering hole at Fisherman’s Wharf. “This will probably all be demolished, I’m sure. There isn’t much left of the foundation,” she said.

Galassi said she thinks tourists “won’t be back any time soon” because “it’s total destruction all around us.”

But the community is sure to rebuild, she said. “We’ll all stick together,” Galassi said. “That’s what it’s all about.”