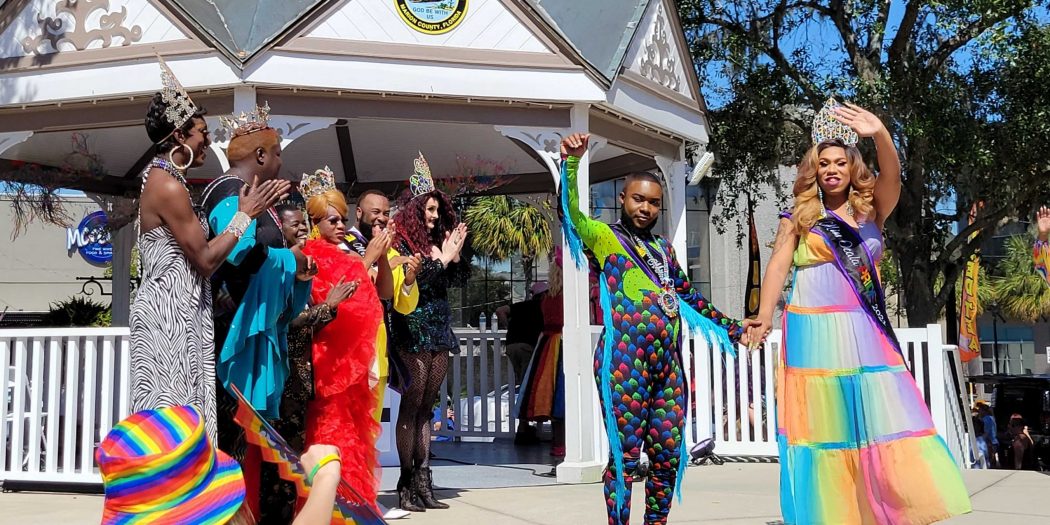 Despite the pandemic and protests, Ocala Pride Fest is back and booming

Not for eight hours did the stage at the downtown Ocala Square go quiet during this year’s Ocala Pride Fest. Between live performances by local bands, vocalists and the dazzling drag queens and kings, Ocala’s downtown ­shimmered with the celebration of LGBTQ pride.

From 10 a.m. to 6 p.m. Saturday, after two years of cancellations due to COVID-19, the heart of Ocala once again sported the colors of the rainbow. Organizers estimated about 2,000 attended Saturday’s event, including four demonstrators who carried signs and shouted at participants.

“It’s such a friendly and open space,” said event-goer Jerry Laveck, 64. “And it gets bigger and nicer every year.”

The event organizers, Ocala Pride Inc., said the main goal of Pride Fest is to create a safe place where the LGBTQ community can feel accepted.

“It’s great to see you’re not the only one who has to think and feel and live like this,” said Charlotte Katz, 69, the treasurer of Ocala Pride.

Pride Fest comes at a poignant time for Ocala Pride after the Parental Rights in Education bill, or as critics call the “Don’t Say Gay” bill, went into effect in July. Rep. Joe Harding, R-Williston, was the legislation’s sponsor and represents Ocala, which falls under state congressional District 22. Harding did not respond to multiple requests for comment from WUFT News.

Considering the national discourse over gay rights, Katz said that Pride Fest is an opportunity to increase the visibility of Ocala’s LGBTQ community. In a largely conservative city, the first step towards equality and acceptance is establishing their presence, she said.

It was impossible to miss the drag queens sashaying to The Weather Girls’ “It’s Raining Men” and Ava Max’s “My Head & My Heart.” One segment for children included a group line dance to the “Cupid Shuffle,” while another a pageant of previous Mr. & Miss Ocala Pride kings and queens.

With a total of 46 vendors, the square brimmed with local crafts, food trucks and an assortment of Pride flags, fans, and rainbow apparel. Other vendors included Ocala Pride’s sponsor, Starbucks, and various local, gay-owned businesses.

The Florida Health Department operated five vendor booths that offered services like confidential on-site and take-home tests for HIV, diabetes and hepatitis. Ocala Pride Vice President Rodney Harper, 47, said that these services are an essential part of their mission to educate about sexual health and well-being.

“You can just be passing through and get tested,” Harper said. “You don’t have to be gay – anyone can get HIV.”

Another vendor present was PFLAG, an LGBTQ advocacy and education group with hundreds of chapters around the country. Ocala’s own PFLAG chapter launched this year, partnered with Ocala Pride to provide support for LGBTQ people and their families.

PFLAG member Barbara Grimshaw said that LGBTQ people often don’t know there are others out there like them, let alone groups where they can congregate.

“There’s nothing worse than feeling like you’re alone,” Grimshaw said.

Grimshaw’s involvement in PFLAG stems from when her daughter came out as gay in college. Grimshaw advised her to seek out groups at her school for people like her, but there were no organizations for LGTBQ people at the time.

“There’s nothing I can do but love you,” she told her daughter when she came out. “It just breaks my heart when parents don’t accept their kids,” Grimshaw said as tears welled in her eyes.

There are those that don’t share Grimshaw’s views. Toward the end of Pride Fest, protestors showed up with signs and expressed their disapproval on the sidewalk surrounding the square. Later, they advanced to the center performance area and began to disrupt the event with derogatory comments.

The Ocala Police Department said that they could not clear the protestors because the square is public property, despite Ocala Pride having rented the space and acquired permits.

The protests echo the opposition to another Ocala Pride event last July. During a Drag Queen Story Hour held at a sponsoring Starbucks on 53 South Pine Ave., protestors and the far-right group, the Proud Boys, disrupted the event with shouts and homophobic insults.

In light of this event, Ocala Pride ramped up security at Pride Fest by hiring extra help, including private security, park rangers and the Ocala Police Department. The organization’s leaders said safety was paramount for the event.

“In Ocala, you can’t show your partner affection without fearing for your safety,” said event-goer Billy Keith.

Though Ocala has grown 14% in the last 10 years according to the U.S. Census Bureau, members of the LGBTQ community said they still don’t feel seen or accepted.

“I see people’s faces change when they walk by and realize what this is,” said Fest vendor Jonathan Pritchard, 52.

Pritchard said he was disturbed by the scarcity of gay-owned businesses in the area, so he created an app called Pride App to locate businesses that cater to the LGBTQ community.

“If their clientele found out it was a gay business, people would be scared off,” Pritchard said.

Ocala Pride and its partners envision an Ocala where the LGBTQ community can feel safe and accepted, and events like Pride Fest are a step in that direction.

“There’s no reason we can’t have a Pride like St. Petersburg,” said Ocala Pride vice president Rodney Harper. “We’re getting there.”

Jack is a reporter for WUFT News who can be reached by calling 352-392-6397 or emailing news@wuft.org.
Previous When a hurricane brings scammers knocking, ‘you are the best protection against fraud’
Next Decolonizing the Curriculum, Episode 1: Understanding the fabric of Africa and Florida