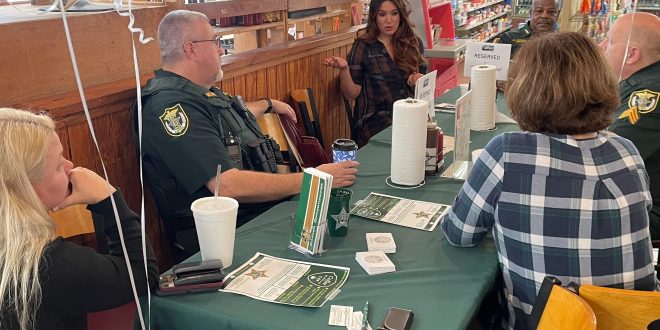 Jeimmy Veloza speaks to deputies from the Alachua County Sheriff’s Office. “In my experience, building the relationship with community pays huge dividends when we do need their help, when something happens and we need them to have our backs,” said Capt. John Richman. (Benjamin Crosbie/WUFT News)

WUFT · Coffee with a Cop

The event was part of an international program that seeks to build connections and understanding between police officers and members of the communities they serve.

CWAC events invite officers and community members to simply sit down and have casual conversations, with no agenda besides just getting to know each other. Since the project was launched in California by the Hawthorne Police Department in 2011, CWAC events have been held in all 50 states as well as Europe, Australia, Africa and Latin America.

The Office of Community Oriented Policing Services, a branch of the U.S. Department of Justice, supported the establishment of National Coffee With a Cop Day, observed on the first Wednesday of each October since 2016.

Turnout was relatively sparse at the Micanopy location, where about 10 officers sat around a table and conversed mostly with each other. The atmosphere was punctuated by coffee machines, other customers chatting with each other, phones ringing and other denizens of cafe airwaves. Two prominent Micanopy leaders, Mayor Ginny Mance and Bishop Christopher Stokes, also attended.

Kaley Behl, who works with the ACSO’s public information office, said that the event was advertised on Facebook, Twitter and their website, and attributed the low attendance mainly to people being busy and the event taking place on a weekday morning.

“People gotta decide if they want to come out or not, and also people are really busy,” she said. “I mean, we’re not exactly giving away anything.”

Two other locations in Alachua County simultaneously hosted the event. In Hawthorne, it took place at Dianne’s Old Time Barbecue in Hawthorne, and in Newberry, cops spoke with community members at the 1906 Farmhouse Restaurant.

Michelle Sherfield, director of the Government and Community Relations Unit at the Alachua County Sheriff’s Office, noted that the other two locations were busier.

Participating officers highlighted the importance of humanizing the police through these face-to-face interactions, which can help ease fears and suspicions that people may associate with the badge and uniform.

“It basically just gives them a perspective that, hey, we’re just like you are, we just have a different job. So I think that’s the most important takeaway that we can have from this,” said Capt. John Richman of the Alachua County Sheriff’s Office. “It’s almost as though they don’t realize that you’re human beings just like everyone else is.”

Lt. Rich LaLonde emphasized that a strong relationship between the police and local residents is crucial to the officers’ ability to do their jobs well.

“We can’t do anything without the community helping us in order for us to help them,” he said.

Despite the attendance not reaching quite what she had hoped, Donni Young, manager of the Pearl, expressed pride in her restaurant hosting the event. She noted that the venue is a staple of the local community and frequently serves police officers, with whom she has a positive relationship.

“We’re really happy that they have these kind of events, I think it really is important,” she said. “We enjoy our relationship with the sheriff’s department, and hope to see that expand throughout the community.”

Benjamin is a reporter for WUFT News who can be reached by calling 352-392-6397 or emailing news@wuft.org.
Previous Two men arrested on charges related to running a human sex trafficking business in a Gainesville group home
Next The Point, Oct. 6, 2022: How one man survived Hurricane Ian aboard his boat