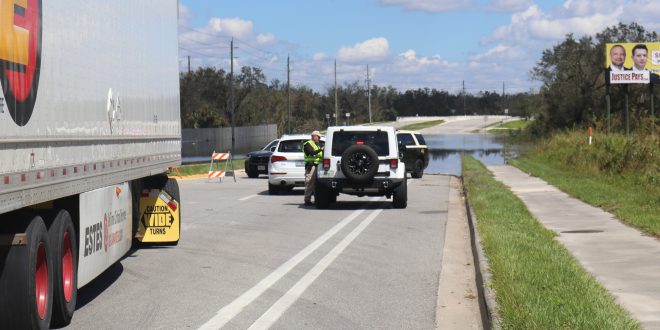 Coastal hurricane evacuees who live north of Ian’s wrath are eager to get back to their unscathed homes, their jobs and the lives they left behind. But there’s a problem, the Peace River has crested making their journey home difficult.

The river crested two days after Hurricane Ian plowed up the state dumping more than a foot of rain in some places.

It is flowing over roads stopping and confusing travelers who have been re-routed off major north and south bound arteries, including Interstate 75 in Charlotte County on Saturday.

Many of these travelers evacuated their homes ahead of the hurricane and now are trying to get back to the Tampa area, north of where the storm hit.

In Desoto County alone, 15 roads were closed Saturday and Sunday due to flooding. The limited supply of gas is creating massive lines at gas stations because the lines spill into rural roads in Desoto County, slowing traveling down to a crawl.

Florida Highway Patrol troopers Jeffery Thomas and Michael Orton were writing down directions for weary travelers who were finding out first hand that phone navigation maps were not updating about the rising Peace River.

Isa Riano spent part of the day in the passenger seat catching up on homework as her dad drove her back — or tried to drive her back to Saint Leo University in the metropolitan area of Tampa.

Normally it takes 2 hours 45 minutes to get from Collier County to the university, Riano said. Saturday it took almost that amount of time just to get to Desoto County, a non-coastal county more than 135 miles from St. Leo University where she was re-routed to because of the flood waters.

A sign saying the road is closed greeted her and other travelers along northbound State Road 31 near Arcadia on Saturday.

“Every time we try to take the other way, it is closed” “and we try to look for it in Google Maps. Then it’s closed again. So we don’t know what to do,” Riano said.

The Jacksonville troopers said some persistent motorists moved the road closed sign Friday, thinking they could plow across. Instead they had to be fished out of the water-logged road.

In all, there were eight rescues Friday night in this very spot.

A motorist asked one of the troopers Saturday if they would be kind enough to let him pass through the road. It was the second time in a day that he found himself in front of the same road closure sign with the same troopers manning it.

Unlike Friday when emergency responders had to pluck motorists from the river-flooded roads, they had no intentions of doing that again Saturday.

The man was told no.

Damian Lofton stopped at the Desoto County Sheriff’s Office to ask if the sheriff’s office could spare a few gallons of gasoline so he could join the long line of motorists trying to fill up their tanks. He was told gas is reserved for emergency responders.

Dejected, Lofton went back to his car.

He and his family evacuated the Tampa are ahead of the hurricane and road out the storm out in the Miami area.

That was a week ago.

Lofton get gas in Lee County Saturday but found a station with a line that he said was miles long.

“It’s about a three-hour wait. The line was three-miles long” he said.

Sitting in his SUV at the Desoto Sheriff’s Office Saturday afternoon, the fuel gage said there were about five miles worth of gasoline left in his SUV.

“Now we’re just her stuck until we figure it out,” he said.

Even before Hurricane Ian tore through the region Wednesday, Desoto County was already water-logged because of immense rain ahead of the storm.

Many roads have been closed since Ian roared through but the number of road closures was rising as the river rose too.

Sarah Walker, a spokeswoman for Desoto County, rattled off numerous communities in the county that are flooded.

“In the flooded areas is where residents have been hit the hardest,” Walker said.

This weekend emergency responders are focusing on search and rescue efforts and using boats to helping people evacuate their homes. As of Saturday night there were more than 90 people rescued from flooded areas.

Jake is a reporter for WUFT News who can be reached by calling 352-392-6397 or emailing news@wuft.org.
Previous Alachua County Fire Rescue travels south to help after Ian
Next Gainesville residents divided on exclusionary zoning elimination