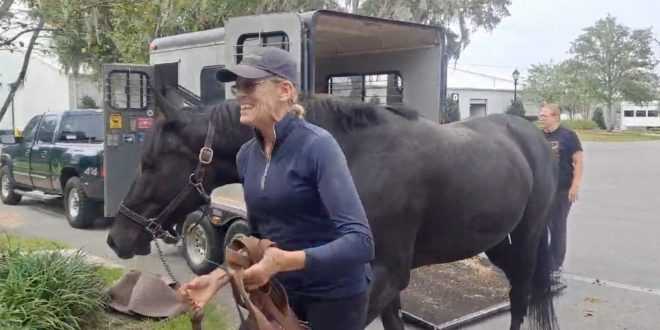 The largest equestrian complex in the nation opened its doors Tuesday to shelter more than 3,000 horses and other animals from Hurricane Ian – and they did it for free.

As Hurricane Ian intensified and knocked on Florida’s door, horse owners began arriving early in the morning to set up their animals in 25 barns across the center’s 600 acres, according to Vinnie Card, operations manager of the World Equestrian Center. Since the center’s schedule had plenty of open space in its barns, Card said, the facility was happy to take in animals in need of shelter.

“The love for the animals, that’s why we do what we do,” Card said.

As horses and a variety of other animals found shelter the center began to feel like a modern-age Noah’s Ark.

One barn will shelter Turbo the tortoise, 46, and a kangaroo named Spanky, both from The Peeps Foundation based in Ocala, mere steps away from the Equestrian Center. And another barn with a separate owner will house donkeys.

Josh Dolan, founder of the miniature horse rescue, said Hurricane Ian will be the organization’s first hurricane since moving to Ocala a year and a half ago.

Without the space at the World Equestrian, he said, more than 50 miniature dwarf horses and other animals under his care would have been moved to Georgia to avoid the storm.

Laura Casati and Bill Lacy sat with four horses and their dog, Rihanna, in a barn Tuesday afternoon. They were just across the street from the on-site hotel where they will stay during the hurricane.

“If you’re gonna pick a place to shelter, this is it,” Lacy said. He and Casati run a small horse training facility in Tallahassee called ChivelliSport. They wanted to stay on-site to care for their animals while they sheltered from Hurricane Ian.

They made reservations Sunday with the Equestrian Center after catching wind of the storm Saturday from morning news reports. The horse stalls, Casati said, are bigger than the standard and have padded floors, which are better for horse hoofs.

Casati moved Dessa de Marco from the horse trailer to the horse stall without any issue, even though it was the first time the four-year-old mare traveled.

“She is gonna be a future champion,” Casati said.

In a nearby barn, Tyler Haney, a trainer at Prince Farm in Palmetto, Fla., watched over several award-winning horses. Triple Gold, a six-year-old stallion, has won competitions at WEC.

Haney said he knew the area well from prior competitions and believed the animals would be safer in central Florida than back home.

“If something were to happen, we have friends and the community close by,” Haney said.

Marion County is renown for its powerhouse equestrian community. Several Kentucky Derby winners have been produced and trained in a wide array of horse farms across the county.

Emily Copeland, a dressage trainer based in Ocala, moved eight horses and a pair of donkeys — Coco Chanel and Pirate, a mother and her newborn baby — into WEC’s facilities Tuesday.

“We’re really grateful they’re doing this,” Copeland said. She said she was preparing for a championship show next week, and having a safe place to keep her animals during the storm relieved a great deal of stress.

Ashley Clayton, who trains show horses near Tampa, plans to stay in Ocala for the week with her horses until she can confirm her barn back home is safe after the storm.

“It’s very safe, secure,” Clayton said. “We don’t have to worry about our horses getting lost or injured.”

She said the on-site veterinary hospital, run by the University of Florida’s College of Veterinary Medicine, gave her peace of mind in case of an emergency.

In Tampa, Clayton said, private facilities that offer space during hurricanes cost about $35 a day per horse. WEC only asked caretakers to purchase bedding from them.

The Marion County Sheriff’s Office will house several horses in the World Equestrian Center’s barns to ride out the storm. The office was not available for comment Tuesday.

Card said the facility’s staff began preparing for extreme weather Friday. Although space for boarding horses is filled at WEC, each barn is temperature controlled and outfitted with a back-up generator. He said the facility is unlikely to lose power for more than a few minutes.

“It’s one thing we can control,” he said.

Sandra is a reporter for WUFT News who can be reached by calling 352-392-6397 or emailing news@wuft.org.
Previous Gainesville hotels shoulder influx of evacuees ahead of Hurricane Ian
Next Life-threatening storm surge possible as Major Hurricane Ian makes landfall Wednesday