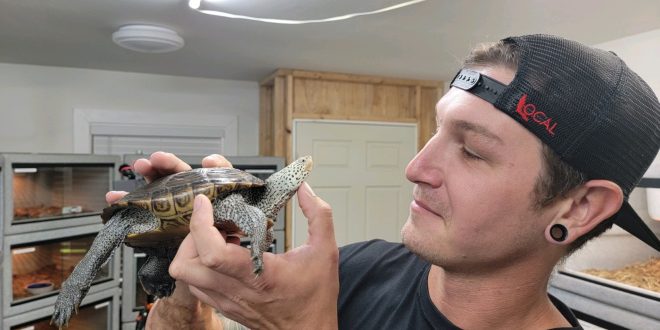 Conservationists are split on a new proposal that would legalize captive, commercial breeding of one of Florida’s flagship species. The policy change could help diamondback terrapin populations as they remain in high demand as low-maintenance pets and poachable commodities.

The U.S. Association of Reptile Keepers of Florida wants the Florida Fish and Wildlife Conservation Commission to approve captive breeding to lessen the novelty associated with the species’ current population levels and better prepare for impending habitat loss due to climate change, spokesman Daniel Parker said. The group represents pet stores and hobbyists.

Florida’s coastline houses five of diamondback terrapin’s seven subspecies. None are endangered, but all are designated as Species of Greatest Conservation Need, according to the state agency. Three of the species are exclusive to the state.

The proposal wasn’t expected to survive. A staff report from the wildlife commission, to be presented during a commission meeting Wednesday, concluded commercialization would provide uncertain benefits while increasing risk of harm to the species, specifically poaching, trafficking and laundering. Analysis by subject matter experts, said commission spokesperson Lisa Thompson, suggests captive breeding is actually likely to increase illegal collection and demand for native terrapins.

When animals are tightly regulated, he said, prices just go up. Ornate diamondback terrapins, a species exclusive to the state, fetched more than $1,400 each in 2015, according to a price analysis provided to the state agency by Florida turtle breeders.

“Like an illegal drug dealer,” Parker wrote, “a poacher is motivated by the profits of selling a product with an artificially inflated value.”

“Unfortunately with FWC,” he said, “there’s an ideology against keeping animals in captivity. I believe that’s more of an animal rights agenda than a conservation agenda. Conservation should be about sustainability of populations.”

Public feedback from FWC’s last solicitation was mixed, Thompson wrote, with breeders favoring a commercial market and other stakeholders voicing concern over adequate enforcement and oversight. The species’ vulnerability – coupled with the risk of contributing to the illegal turtle trade and increasing harm through collection pressure — led the FWC staff to recommend current rules remain unchanged.

Miami is the third busiest U.S. port for the export of turtles, according to data from the U.S. Fish and Wildlife Service, with an estimated half a million turtles shipped annually

Captive breeding — last allowed in Florida in 2006 — would make the terrapins more accessible, Parker said, and deter poaching, just one threat to the species.

The wildlife commission approved rules to improve management of wild diamondback terrapins in December 2021 as populations declined due to habitat loss, animal trading and use for food and medicine overseas.

Terrapins aren’t not commonly sought out as pets, said Hallie Risley, who works at Gator City Reptiles in Gainesville, but private hobbyists have been advocates for reinstituting captive breeding since the original 2006 ban.

Transitioning any animal from their native environment into captivity is difficult, Risley said. If they are born into captivity, they can have fewer health and behavioral issues. It also allows more opportunities to understand species’ habits: the main mission on captive breeding, she said.

The proposed breeding program could also allow terrapins confiscated by law enforcement to be placed with breeders who are licensed by the wildlife agency. A license fee, Parker said, could offset administrative costs and fund conservation efforts similar to existing operations for venomous reptiles.

The wildlife agency was accepting public comments during its meeting Wednesday. Comments submitted in advance must be sent no later than 5 p.m. Friday.

Julia is a reporter for WUFT News who can be reached by calling 352-392-6397 or emailing news@wuft.org.
Previous The Point, Sept. 23, 2022: Another lawsuit filed over DeSantis’ use of state funds for migrant flights
Next Despite economic hardships, a few Archer hunting preserves thrive