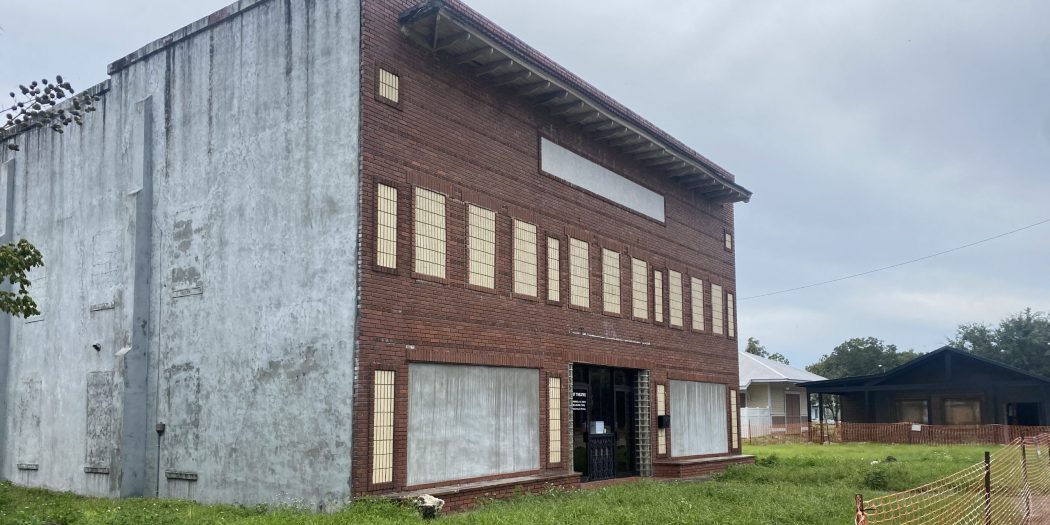 The Priest Theater as it stands today. Nobody is allowed to enter for safety reasons. (Averi Kremposky/ WUFT News)

In the next month, Florida could officially lose what once was its oldest operating movie theater, and Leslie Evans’ favorite place to get a concession-stand pickle.

Evans, a 63-year-old High Spring resident, was among the many heartbroken on Aug. 25 when the Priest Theatre took to its Facebook page to render the news that its building was in active structural collapse.

The theater in High Springs, which has been closed since the onset of the COVID-19 pandemic, was set to be sold to Living Covenant Church in 2020. The community was eager to still have the symbolic building downtown to remind them of first dates and childhood memories, but time had a different plan.

According to the recent post, demolition of the Priest will begin in 30 days unless someone is willing to buy the $350,000 building. This price does not include restoration costs, which Alligood and her family knew would be financially unattainable for them.

The hundreds of comments that began to amass under the sullen post were a tangible demonstration of the community’s grief.

Alligood said her family’s theater was unlike any mainstream theater. It was a place to see a movie, but more than that, it was a breeding ground for socialization and good company.

“In our theater, everyone was talking. People would cross over seats and go around to the other side just to hug people they haven’t seen in a month,” Alligood said.

Christina Arban, who owns a daycare in High Springs, has known about the Priest her whole life. Her mother used to be an employee at the theater, and aside from the sentimental attachment, Arban said she has always enjoyed the Priest for the consistent sanctuary it provided.

Janice Sheffield, the previous owner and Alligood’s mother, had a reputation for enforcing good behavior in her theater. Her loving efforts are why parents have felt safe dropping their kids off at the Priest for generations.

“She would walk around with a flashlight, and you knew you better do the right thing,” Arban said. “It wasn’t just a hangout place where you could act rowdy. You respected the place and you respected each other.”

During the summer, Arban said she would even take kids from her daycare to go see movies at the Priest.

After the online announcement, residents of High Springs were aching for a way to save the building where they’ve been finding community and entertainment for generations. Many recommended fundraisers or nonprofits, which have helped the Priest Theatre in the past. But Alligood said she doesn’t think people understand the extent of the damage this time around.

Once city managers reached an estimate of $400,000 to repair the building that was constructed in 1910, Alligood told them to just stop looking.

In 2012, the community raised more than $87,000 to “Save the Priest” when Hollywood starkly decreased their production and distribution of 35mm film. The transition to complete digital compatibility was economically daunting for a small family business, but the community wasn’t willing to lose its cornerstone of entertainment and connection.

Evans remembers hearing about the fundraiser even though she had never visited the Priest.

“They needed $60,000 or something and they were asking people to donate because they were switching formats,” Evans said. “I looked at my husband and said ‘Who in the world is going to donate? That’s crazy.’”

In 2022, she needed to collect herself before describing what the theater now means to her.

Evans, originally from Coral Springs, said she always felt like an interloper among people whose residency in High Springs spans generations. Until finding community at the Priest, she said she felt disconnected from the people who have lived there for what felt like a millennium.

“Every time I went to a window there, it was like a smile of recognition. We would walk in and get our tickets and there would be three people on stools and I would get a hug from each one of them,” Evans said

Trever Davis, a 26-year-old stay-at-home-dad, used to work in the projector room of the Priest when he was a kid. He said the closing of the theater in 2020 and its imminent demolition is a sour reminder of the business landscape he sees taking shape in his community.

“The biggest problem with High Springs right now is that they’re focused on tourism. That’s all it is. It’s all about bringing in breweries, alcohol and tourism,” Davis said.

Arban and Davis both confirmed that after the Priest closed, the closest movie theater was in Gainesville, which is a nearly 30-minute commute.

While the theater’s closure left the High Springs entertainment scene barren, the complete lack of the building will be more symbolic. The Priest Theatre has stood in the heart of downtown for over 100 years.

Alligood said she’s ready to say her bittersweet goodbye to the theater, but not before she and her family exhaust all their options. Despite what the Facebook post details, she said they’re staying flexible on the demolition date if somebody is willing to start the buying process. The family is hoping for someone to carry on their legacy of entertaining the community.

Alligood and her family have also considered seeking county assistance in restoring the building that is a keystone of High Springs’ history. She is pushing to secure a spot on the agenda in an upcoming county commission meeting.

Even if the building doesn’t last, the memories of the Priest Theatre are sure to be timeless. Evans will never forget the home she found in the Priest, its owners and of course, its pickles.

“I had a hot romance with a small-town business, and I guess now, like every other romance, it’s over and I’m left brokenhearted.”

Averi is a reporter for WUFT News who can be reached by calling 352-392-6397 or emailing news@wuft.org.
Previous Alachua County residents express concern over proposed development that includes new UF golf course
Next Migrants sue Florida governor over Martha’s Vineyard flights